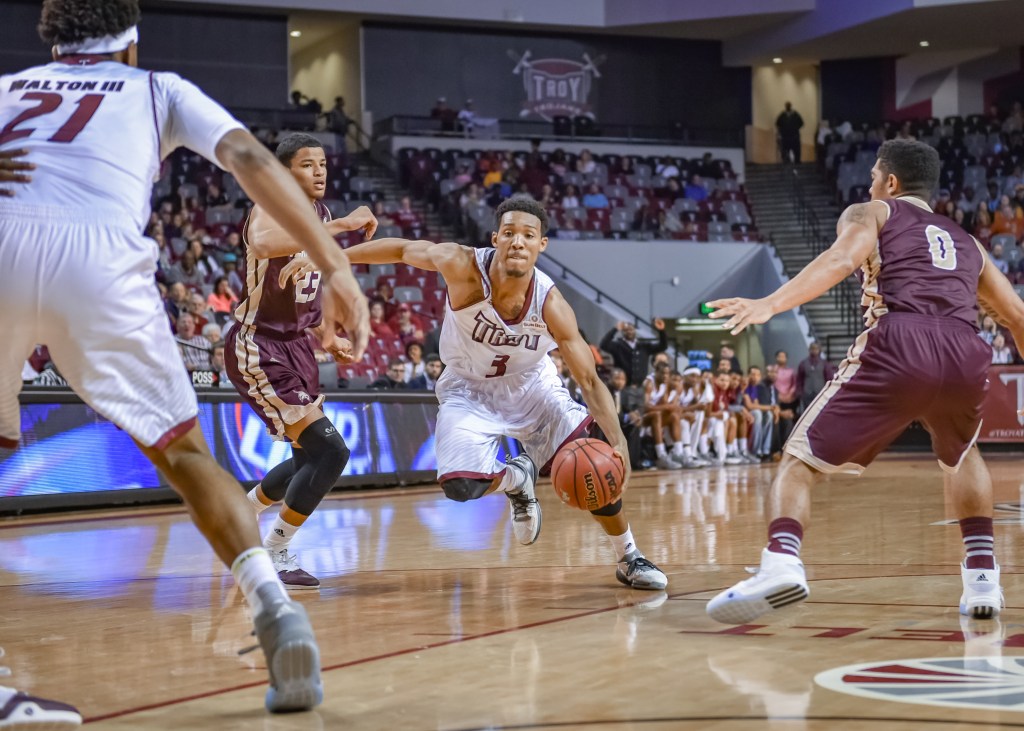 Troy senior guard Wesley Person has his sights set on breaking Troy’s all-time scoring record this season, but his focus remains on getting the Trojans back to the NCAA Tournament.

Last season was a whirlwind for the Trojans. After winning just nine games the year prior, Troy found themselves in North Carolina playing perennial power Duke in the opening round of the NCAA Tournament.

Person and the Trojans look to remain hungry and humble this season.

“Our coach (Phil Cunningham) from day one on the first day of the summer gave us all a workout shirt that says ‘Stay hungry and stay humble,’” Person said. “That has been our mindset. Pretty much don’t be complacent and enjoy what happened last year; but again, we have to stay hungry because we want that championship.”

The Trojans had their first wining season (22-15) for the first time since 2009 and with that comes a lot more excitement for Trojan basketball.

“It’s easy to be excited about basketball coming off a championship,” Persons said. “In years past, it was like ‘What is Troy going to do now? We won 9 or 10 games; what are you going to do now?’ Now that we won, there is a little more excitement. We’re ready to see what we are going to do this year.”

Person comes into this season with a total of 1,481 total points as a Trojan. That amount puts Person just 384 points behind Anthony Reed’s school record of 1,865 points. Person scored 548 last season.

“I am going to try,” Person said when asked if he was going to break the record. “If it’s meant for me to break it, than I will. I am going to approach every game like I do any other. I am just going to play the game and if it happens, it happens.”

When asked if he wanted to do it in front of the Trojans faithful, Person said with a chuckle “I’ll try.”

Coach Cunningham would like to see the record be broken regardless of the venue.

“He may make sure of that,” Cunningham said with a laugh.

After making a tournament appearance last year, Cunningham believes the weight has been lifted off Person’s shoulders and now he can go out and enjoy playing basketball.

“I don’t think there is a whole lot of pressure simply because winning the tournament last year and playing in the NCAA Tournament is when the pressure comes,” Cunningham said. “I think that sets him up this year to enjoy his senior year.”

The Trojans begin the road to what they hope is their second consecutive title this Friday evening when they take on North Dakota in the Rainbow Classic in Honolulu, Hawaii. Tip-off is scheduled for 9:30 p.m.