The race is on: With a little help, Trojans find themselves in heated chase towards conference championship 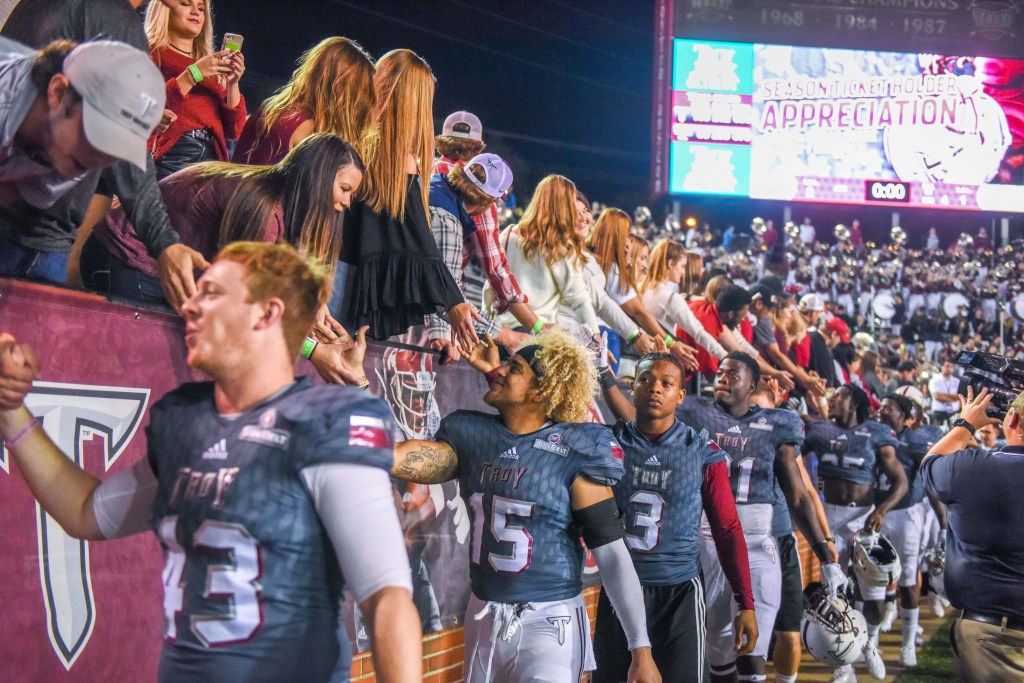 Troy players celebrate with the student section after their 24-21 win over the Vandals.

Troy’s journey to a potential Sun Belt Conference championship became a little bit easier on Saturday with a win over Idaho and a little help from Louisiana-Monroe.

The Trojans knocked off the Idaho Vandals 24-21 on Thursday night to improve to 7-2 overall and 4-1 in conference play.

“I’m proud of our guys for taking care of business on Thursday night,” said head coach Neal Brown. “It was good to get a mid-week win. It was a quality win; I think Idaho is a good football team. I think they’re well-coached on both sides of the ball.”

The win for the Trojans gives them three in a row after they fell to South Alabama in their only conference loss of the season.

“It was a really good win,” Brown said. “I think we have to continue getting better. I felt like we made a lot of strides in the Georgia State and Georgia Southern games. I don’t feel like we played our best versus Idaho. But I think the sign of a good team is when you can win games when you don’t play your best.”

After getting the win on Thursday night, the Trojans were able to sit back and enjoy watching football on Saturday. If they were watching the scores, they noticed their conference rival Appalachian State fall to Louisiana-Monroe 52-45.

“We’re incapable of looking further than one week. We’ve got to be locked in,” Brown said. “I don’t even talk to our guys about the game. Tomorrow we’re going to focus on practice and meetings. We’re a day-by-day operation right now. I’m sure they saw it on social media and maybe watched it on their phones on the ESPN app.

If Troy needs an example of the importance on not looking ahead, they should look no further than their next opponent’s near-win over Arkansas on Saturday. Coastal Carolina came into Saturday with a 1-7 record but narrowly missed out on a win against the Razorbacks.

“I think it’s probably good. I think that’s really good,” said offensive coordinator Kenny Edenfield. “That’s the negative to coaching 17- to 22-year-olds. The week we beat LSU, the next week they were full of themselves to be honest with you. We tried to tell them. I think now, I think they’ll take a look at it and say, ‘Hey, Coastal – they’ve got a good team,’ which is the way all college football is. Anybody can beat anybody on any given day, especially if the other team doesn’t show up.

Troy hopes to keep pace in the conference title race Saturday when they face Coastal Carolina at 3:30 p.m.