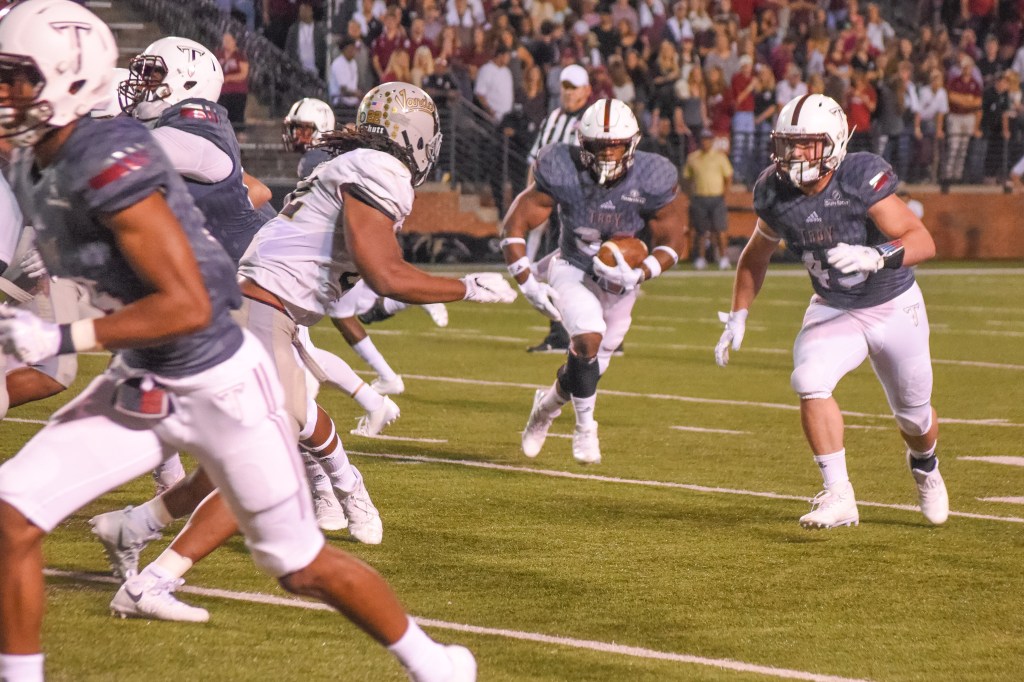 Troy running back Jordan Chunn made his triumphant return to the lineup on Thursday night and rushed for 113 yards in Troy’s 24-21 win over the Idaho Vandals.

In the win, Chunn rushed for his 44th and 45th career touchdowns, which ties the school record and leaves him just four shy of setting the all-time Sun Belt record. Chunn’s 113 yards gives him a total of 2,997 yards in his career, good enough for second all-time in school history.

Chun suffered a laceration to his right leg during the Trojans’ game against South Alabama on October 11, forcing him to sit out in Troy’s next two games. He made his return Thursday.

“It was good just to be back, to get the jitters out of me,” Chunn said. “I’d been out the last two games, so it felt good to be back.”

During Chunn’s absence, the Troy running attack didn’t miss a beat. In the games prior to Idaho, the Trojans rushed for a total of 363 yards thanks in large part to Josh Anderson and Jamarius Henderson.

Chunn missed some action last year due to an injury and he never likes to miss a game, but this time he was happy to sit back and watch his teammates gets some well-deserved work on the field.

“I wasn’t really down about it,” Chunn said. “I was glad those guys got in there to play and show what they can really do. Josh Anderson had a really great fall camp, and he really proved to everybody that he could play. I’m glad he got out there and did what he’s supposed to do.”

With just three more regular season games left on the schedule, the Trojans hope having three capable backs will give them a substantial advantage.

“It’s good,” Chunn said. “We have Josh Anderson that can come in and play, and Jamarius and actually B.J. Smith that can come in and play if I’m not healthy enough or banged up. If we put them back in, we can keep the ball rolling. It’s a really big thing. As a running back, your body can take only so many hits. I feel like Coach Brown and Coach Reagan have done a pretty good job of taking those hits off me by putting Josh Anderson and Jamarius in there and B.J.”

According to offensive coordinator Kenny Edenfield, having Chunn back in the lineup adds a little extra whenever he is on the field.

“I think the best thing about it is he’s playing well, but the others are playing well. That gives us a lot of guys to play with. When you’re running the ball like we are, guys are going to be banged up. Just having those other guys we can count on makes a big difference. You can kind of sense it when he’s out there playing; everybody feels a little bit more at ease, I guess.

Chun and the Trojans will be back in action on Saturday on the road against Coastal Carolina at 3:30 p.m. central time.