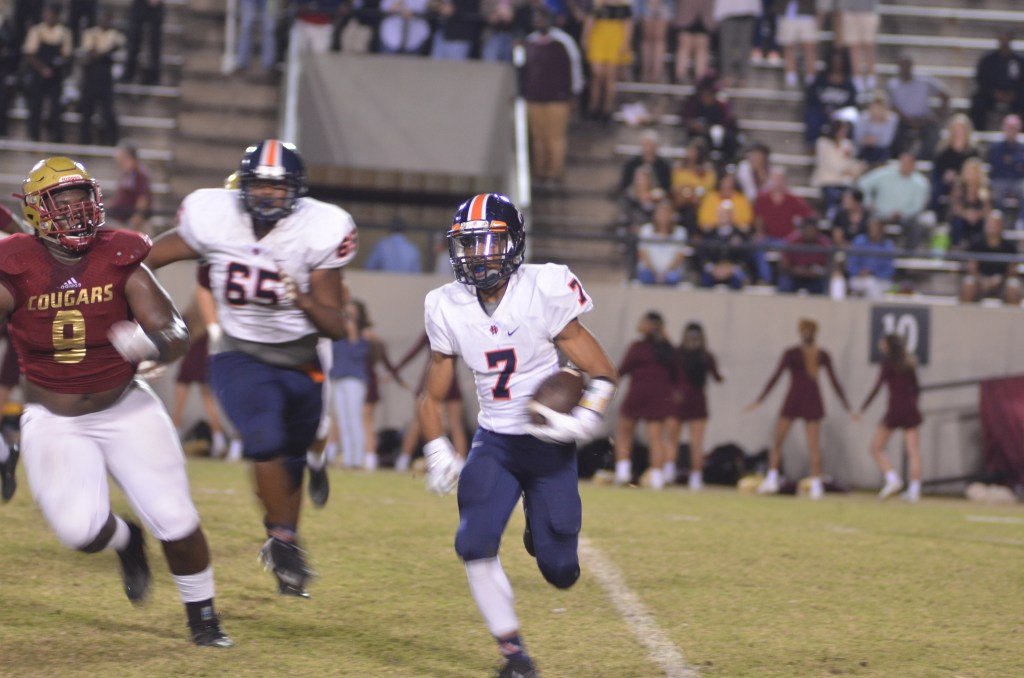 Ahmad Daily hauled in a game saving interception to give the Charles Henderson Trojans a 14-7 win over the Northview Cougars in the regular season finale on Thursday night in Dothan.

The win gives the Trojans a 6-4 record heading into the first round of the playoffs next week.

“It’s not about beating Northview,” said head coach Brad McCoy. “It’s about the grit and the will to win. We talked at halftime about how important the second half was going to be. We had to try and impose our will and break their will. I think we did. I am certainly proud of the effort and the determination in all three phases. We had some kids step up tonight and make some plays.”

The Trojans were led offensively by running back Jared Wilson and wide receiver Kelshun Campbell.

Wilson unofficially rushed for 160 yards and a touchdown.

“Jared Wilson has shown me a side of him that I’m not sure I saw in the four years that we have been here,” McCoy said. “Jared is turned it up to another level and I am proud of our offensive line.
Campbell had the biggest plays of the night in the passing game by hauling in 3 passes for 51 yards and a touchdown.

“Kelshun is a big, tall receiver,” McCoy said. “He is a matchup nightmare for corners and safeties. We saw a matchup situation where we thought Kelshun would be the better player and he did. He went up and made a nice play.”

It was a tight defense battle in the first half on Thursday night. Both teams had a combined 9 offensive possessions, but scored a combined 14 points.

After both teams went scoreless on their opening possession, the Cougars jumped on the board first. After returning a Charles Henderson punt to the Trojan 23, the Cougars picked up a 13-yard touchdown run to go up 7-0.

The Trojans went on a lengthy drive on their next possession, but after 13 plays they were forced to give up to the Cougars.

It would be later in the second quarter before they got on the board. Quarterback Noah Lowery connected with big Campbell for 40-yard score to even things up at 7 with 6:01 remaining in the opening half.

The Trojans came out of the half and forced a three and out. On their first offensive drive, the Trojans went 64 yards in five plays to take the lead. Lowery connected with Hudson on a 23-yard completion and Wilson finished off the drive with an eight-yard touchdown run to put the Trojans up 14-7 with 6:01 remaining in the third.

“Some of their first downs were due to penalties,” McCoy said. “Our defense never gave it and they never folded. I never say them more confident coming off the field than I did tonight. Winning breeds that confidence and that is what we need heading into the playoffs.”

The defense made the play of the game to save the win for the Trojans. With 10 second remaining and the Cougars near the red zone, Daily muscled the football away from a Cougar receiver for an interception to ice the win.

The Trojans will travel two and a half hours to take on Clay Central next week in the first round of the Class 5A state playoffs.

“Clay Central is a great football team,” McCoy said. “We are going to certainly have to game plan and work this week to put together the best situation for our guys to win on the road.”