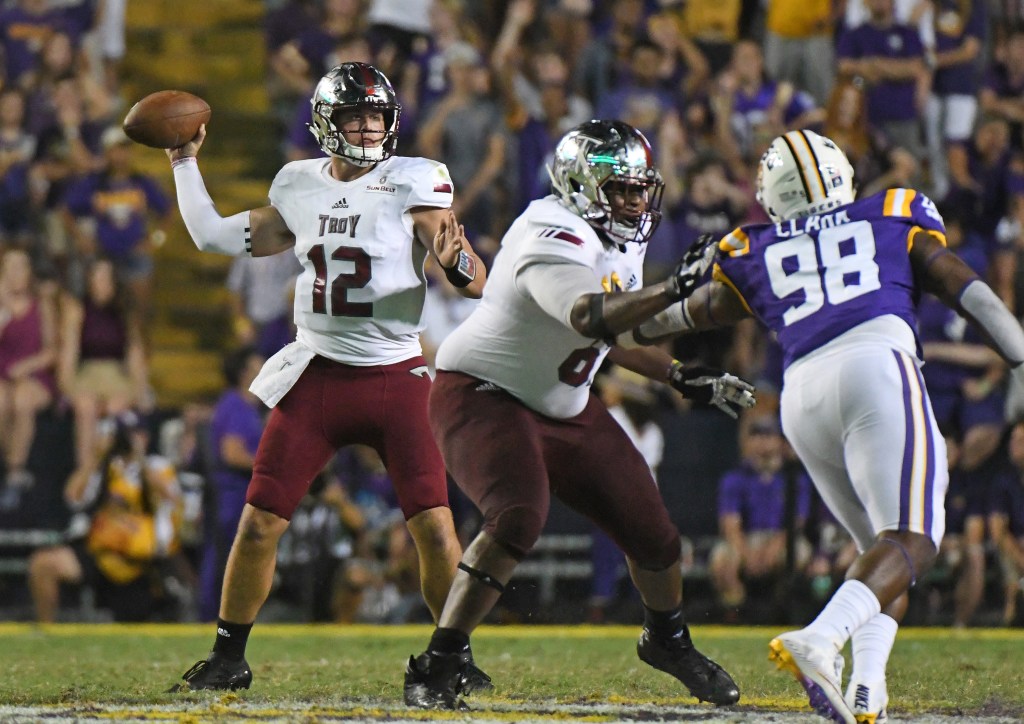 The Troy Trojans return to Veterans Memorial Stadium this evening for a midweek game with the Idaho Vandals in front of a national audience.

It was a quick turnaround for the Trojans after defeating Georgia Southern 38-16 on Saturday.

With a 6-2 overall record, the Trojans have secured bowl eligibility and are now set to hunt down a Sun Belt Conference championship.

“Idaho is playing their best football of the year,” said head coach Neal Brown. “They’re well-coached by Paul Petrino and their staff; I have a lot of respect for what they do.”

This is Troy’s second midweek game of the season, but is the first time they will play a game with just four days to prepare.

“This is a tough turnaround going from Saturday to Thursday,” Brown said. “Idaho is doing the same thing, but they have to travel. We practiced last night (Sunday), it’s usually our day off. Then today (Monday) will be our main work day of the week. We’ll be in shells, then a normal Thursday practice tomorrow, a normal Friday practice on Wednesday; then we’ll be ready to play on Thursday night.”

The Trojans are currently in a two-way tie for second place with Georgia State, while the Vandals sit in fifth with a 2-2 conference record. Troy would place ahead of Georgia State with their 34-10 win over the Panthers giving them the tiebreaker.

This evening’s game will be the Vandals’ first visit back to Troy since 2015 when they knocked off the Trojans on homecoming 19-16.

“That was two years ago,” said Troy receiver Emanuel Thompson “They have a pretty good team. They have a really good quarterback down there and he has some excellent skill players around them. They are well-coached. They came down prepared and they really outplayed us. We went there last year and outplayed them, so we look to do the same thing this Thursday.”

The Vandals offense has the potential to give Troy problems. Led by head coach Paul Petrino, the Vandals have averaged nearly 24 points per game and 368 yards of offense.

“Offensively, they’re very good schematically,” Brown said. “I think Paul does a great job; he’s calls the plays there and keeps people off balance with a lot of different looks. He and Vic [Koenning] are familiar with each other. They were on the same staff at Illinois. Their quarterback, Matt Linehan, is tremendous.”

The Vandals are averaging 229 yards per game this season.

The Troy passing game has been up and down for the majority of the season. The last two weeks, however, the Trojans have accumulated 355 yards receiving. John Jonson and Tray Eaffort have been at the center of the improvement of Troy’s passing game by combining for eight catches, 185 yards and two touchdowns over the last two weeks.

Johnson also threw for a touchdown last week against the Eagles.

“Well, he’s (Johnson) gotten us going the last two weeks,” Brown said. “He’s a senior and a guy that has played a lot of football here. He had a huge reception against Georgia State that got us going. He had the great touchdown pass last week that got us going and set us up to be in control of that game. He keeps getting better.”

After sitting out last year due to academic requirements, Eaffort has come along quickly over the last two weeks. He caught Johnson’s touchdown pass Saturday and accumulated 53 yards.

“He’s driven. He’s a guy that’s really driven,” Brown said. “He had a really productive career over at Lee County. We were fortunate to get him. I think he has big-time talent. The more understanding he has in how to play the game at the receiver position, I think the sky’s the limit for him.”

The Trojans and Vandals will kick off at 8:15 p.m. and the game will be broadcast on ESPNU.

“I don’t want to underestimate it; this is a key game for us,” Brown said. “We need to have a great showing with our home crowd here. I know we have a lot going on from a promotional standpoint. It is a late kick, but I know our students are fired up about that. I expect us to have a great atmosphere. I know the weather is going to be nice, and we need to put our best foot forward.