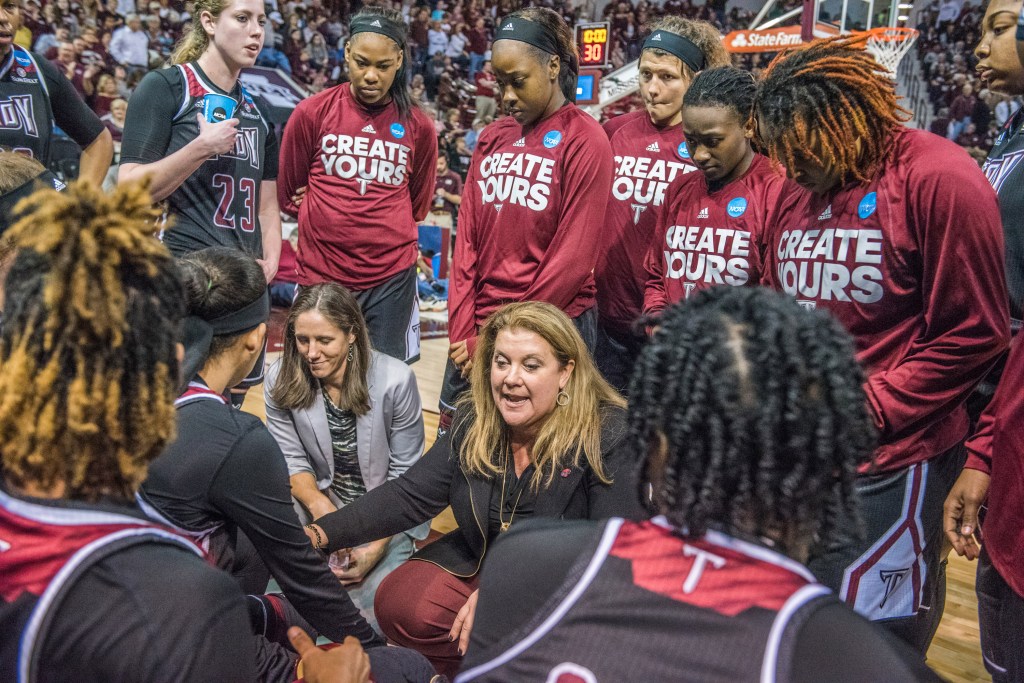 Troy head coach Chanda Rigby speaks to her players during a timeout in the second half in a first-round women's college basketball game against Mississippi State in the NCAA Tournament, Friday, March 17, 2017, in Starkville, Miss. (Messenger Photo/Jonah Enfinger)

The Troy women’s basketball team has their eyes set on winning their third straight Sun-Belt Conference championship this season. They will have to do it with a relatively new basketball team.

The Trojans celebrated their second championship last year after they defeated Louisiana in the conference championship game. They advanced to their second NCAA Tournament where they fell to Mississippi State. After the season, head coach Chanda Rigby had the task of replacing seven seniors including Caitlyn Ramirez, Lauren Day, Jayla Chills and Claresa Banks.

“Basically we lost seven of our eight top scorers and six of our top eight rebounders,” Rigby said. “We did lose a lot, but we do have a good senior leadership.”

The Trojans return two seniors in Dajia Williams and Amanda Mendoza. Williams averaged 4.6 points per game with 4.1 rebounds in 12.5 minutes, while Mendoza led the team and was ninth in the conference with 98 assists.

“They have been through the gamut and they are very experienced,” Rigby said. “They are very good at sharing their knowledge with the young ones. We are excited about the season.”

The Trojans have a recent history of success. For Williams, it’s all about communication and she expresses the importance of that with her new teammates.

“First I try to get us tight with one another,” Williams said. “Once we get our communication and relationships together, we will be stronger on the court. I try to let them know what the coaches are looking for since I have been here.”

In years past, the Trojans have had vocal leaders in Ashley Beverly Kelley and Ramirez. This year Williams may be that player.

“We don’t have as much of a high-motor outlet as much as ABK (Kelley),” Rigby said. “Dajia does speak up a lot more than ABK ever did. She has her own leadership style. It’s like she has the sense of the room. When the coaches have had it she says ’Lets get together and get this right.’ She is the translator from ‘coaches speak’ to ‘freshmen speak.’”

The Trojans got off to a 7-5 non conference start last season and the Trojans hope to get off to an even better start in 2017.

The Trojans will officially open up on November 10 at home against Stillman. The non-conference schedule will include teams such as Ole Miss, Jacksonville, Tennessee and old conference rival Middle Tennessee State.

“We are definitely ready to get off to a good start,” Rigby said. “We have a very challenging schedule coming up and we know that. We replaced four teams that we beat handily with four NCAA Tournament teams last year along with Tennessee and Ole Miss. We are a very unproven and untried team to this point. We want to get the bugs out early and get to what counts and be successful in Sun Belt Conference play.”

The Trojans have their fair share of new players wearing the Trojan uniforms this season including Jasmine Robinson of Augusta, Georgia and Jasmine Sanders of Charlotte, North Carolina.

“Jasmine Robinson is one of the fastest players I have ever coached,” Rigby said. “She knew when she signed on the dotted line that she was coming in here to help us immediately. Jasmine Sanders is a six-foot-one guard and ever since we played Oregon State and got beat in the length game, we realized that it’s not just in the post game, but at the guard position that we needed some length. We thought she was going to need a year to come along, but she is actually showing that she is going to be a major contributor to us now.”

The Trojans lost key rebounders in Ramirez and Kristen Emerson, but Williams believes this crew won’t miss a beat.

“I feel like everyone in our post position has stepped up,” Williams said. “We have a board that we keep during practice where we keep track of our rebounds. Every day we are battling each other. Every post player is doing their part.”

The Trojans will host Auburn University-Montgomery in an exhibition this evening beginning at 5 p.m.