Back at it: Trojans must make a quick turnaround in matchup with Idaho on national television 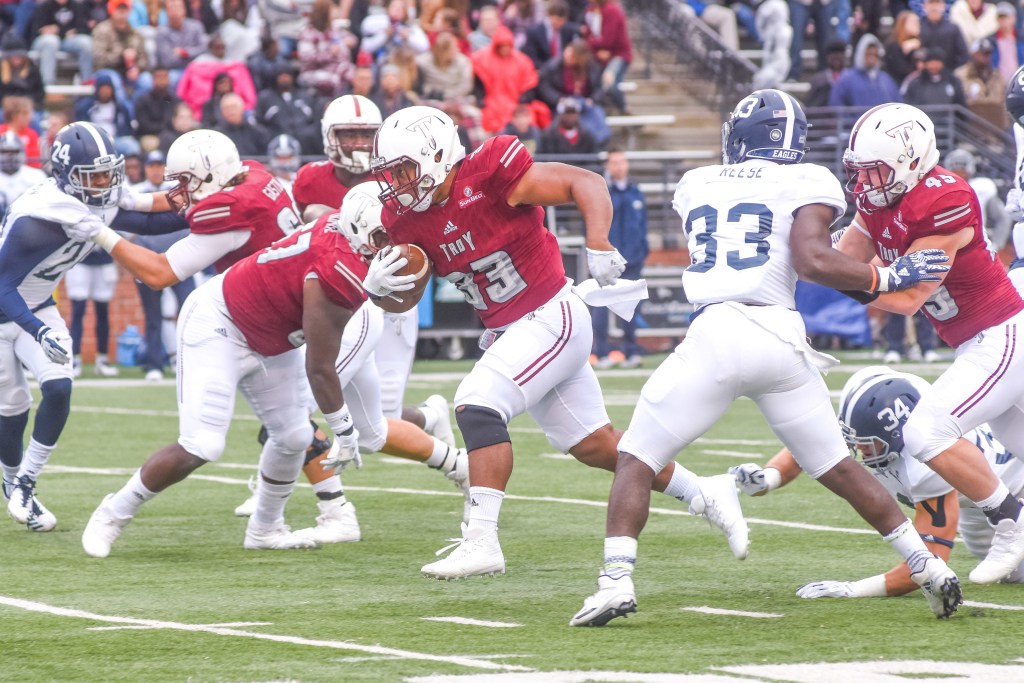 photo/Jonah Enfinger Troy running back Josh Anderson (33) runs the ball up the middle during the Trojans’ win over Georgia Southern on Saturday afternoon.

After Troy’s comfortable 38-16 win over Georgia Southern on Saturday, the Trojans will face Idaho Thursday evening in front of a national audience after only days of rest.

Saturday’s win for the Trojans kept them in third place in the Sun Belt Conference with a 3-1 record.

“It was a quality win over Georgia Southern here on Homecoming,” said head coach Neal Brown. “It gets us to 6-2 and 3-1 in the Sun Belt. It was a good win because it’s been a long time since we’ve beaten Georgia Southern, since 1992. It’s good to get that off our chest.”

The win for the Trojans gives them consecutive homecoming wins. Their last loss came in Brown’s first year against Idaho, this week’s opponent.

The Trojans will take on the Vandals in their second of three mid-week games this season. The Trojans lost 19-8 to South Alabama on a Wednesday on October 11 and will play their final midweek game on Friday, November 24 against Texas State.

The Trojans have dropped their last two regular season midweek games. In both games, the Trojans had the eyes of the nation paying close attention. In last year’s games, Troy had just cracked the AP Top 25 poll the week prior to the Arkansas State game. This year they fell to South Alabama 10 days after knocking off nationally ranked LSU. Coach Brown said those games will not be a topic of conversation this week.

“I’m not going to talk about it one single time this week, honestly,” Brown said. “I probably built that last game up. I was worried about us coming in and having a letdown emotionally off the LSU game to our last midweek game. I talked about the importance of playing on national television and building your brand. This week we’re just going to suit up and play Thursday at 8:15, whether there is 30,000 or nobody here, whether it’s on ESPN3, ESPN2 or ESPNU. We’re just going to worry about being 1-0. We have to focus on the task at hand.”

The Trojans worked throughout the spring on their plan for short turnarounds. Coach Brown admitted a lot of it will be similar to how the Trojans prepared for South Alabama a season ago.

“What you do is we spend a lot of time over the summer gameplanning, especially for these short weeks,” Brown said. “We used part of our bye week. We used two days during our bye week to get ready for them.

“When we played South, we were coming off a bye the week before. We had a bye, played a Saturday, and then played a Thursday. we were a little more rested and recovered. This time, we feel like we’re in good shape, so we’re going to use a very similar plan that we did to get prepared for South last year.”

For the players, Thursday will just be like any other game.

“Me, personally – I love them,” said senior receiver Emanuel Thompson. “They just haven’t been running in our favor the last few years. I think we are closer now as a team than we have ever been. So I think we have to come and say ‘It’s a Thursday night game – good. We are going to go out and handle business like it’s a Saturday game.’”

Kickoff is scheduled for 8:15 p.m. The game will be broadcast on ESPNU.