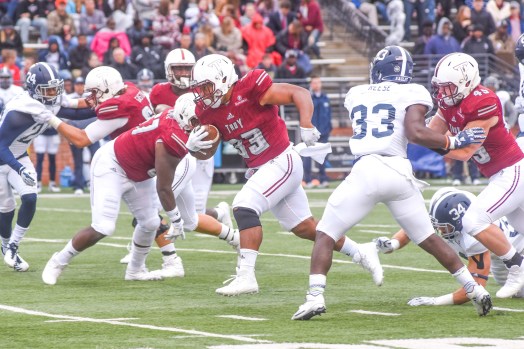 photo/Jonah Enfinger Josh Anderson runs the ball for the Trojans against Georgia Southern on Saturday afternoon. 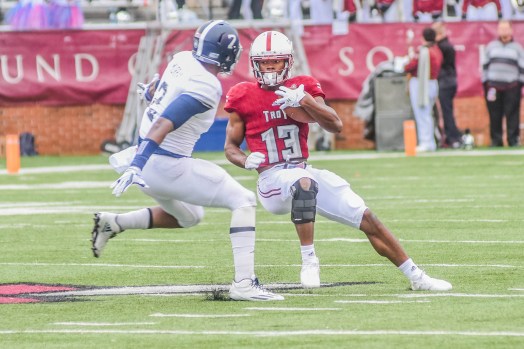 photo/Jonah Enfinger Tray Eafford runs with the ball after making a catch against Georgia Southern.

In the midst of frigid temperatures and a steady rain, the Trojans sent the fans home with a 38-16 win over Georgia Southern on homecoming.

The win for the Trojans gives them bowl eligibility with a 6-2 overall record and 3-1 conference mark. It’s the first time the Trojans have been bowl eligible in back-to-back seasons since 2009-2010.

“Really proud of our guys,” Brown said. “We are 1-0 this week. It gets us to 6-2 overall, which gets us bowl eligible. I think that’s a critical number. it’s something that I don’t think we should take lightly. By no means was that the end goal, but we had dry run there for a long time.”

The win for the Trojans gives them their first win over the Eagles since 1992.

“This is a big win regardless of what their record is,” Brown said. “Nobody within our organization had ever beaten Georgia Southern. Tonight we have a full room and it’s a significant win.”

It was a first half full of running the football between the Trojans and the Eagles. The Trojans threw just 12 times in the opening two quarters with five of them coming on the final drive.

“We knew all week that we had a good chance of it being wet,” Brown said. “I really felt like we really wanted to come out and establish the run game early. We challenged the interior of our offensive line.”

The Trojans didn’t waste very much time to gain a comfortable lead in the opening half. It took the Trojans a combined 1:29 to score their first three touchdowns.

The Trojans got the board on the second play of the game when John Johnson took a Silvers pitch and threw it 40 yards into the waiting arms of Tray Efford for a touchdown.

“John is versatile man,” Brown said. “He can throw the football. The really impressive thing about that play is he caught it, moved away from pressure and then threw it. We knew we wanted to run a trick play early in the game because with these option teams its critical you get a head.”

The Eagles answered immediately and evened the score on a three-yard touchdown run by Monteo Garrett.

Following a 32-yard kick return by Cedarious Rookard, Josh Anderson had a quick strike of his own on a 32-yard run on the drive’s first play to put Troy up 14-7.

After a 46-yard field goal by Eagle kicker Tyler Bass, Troy extended their lead to 21-10 on a Jamarius Henderson’s longest run as a Trojan, 46 yards.

Clark Quisenberry picked up his first touchdown of his career at the end of the half to put Troy up 18 at 28-10.

Sumpter, in his second game as a kicker, converted a 28-yard field goal to extend Troy’s lead to 31-10 late in the third.

BJ Smith joined in on the party with a three-yard touchdown, his first career touchdown to extend Troy’s lead to 38-16.

With Chunn missing his second consecutive game, Anderson finished the game with 96 yards and a touchdown in his second game as a starter this season.

“I was ready to go,” Anderson said. “I felt like I had a great week of preparation. I really trusted my reads.”

Silvers completed nine of his 18 passes for 102 yards, while Eafford led the way with three catches for 53 yards.

The Trojans will have a quick turnaround when they host Idaho on Thursday night beginning at 8:15 p.m.