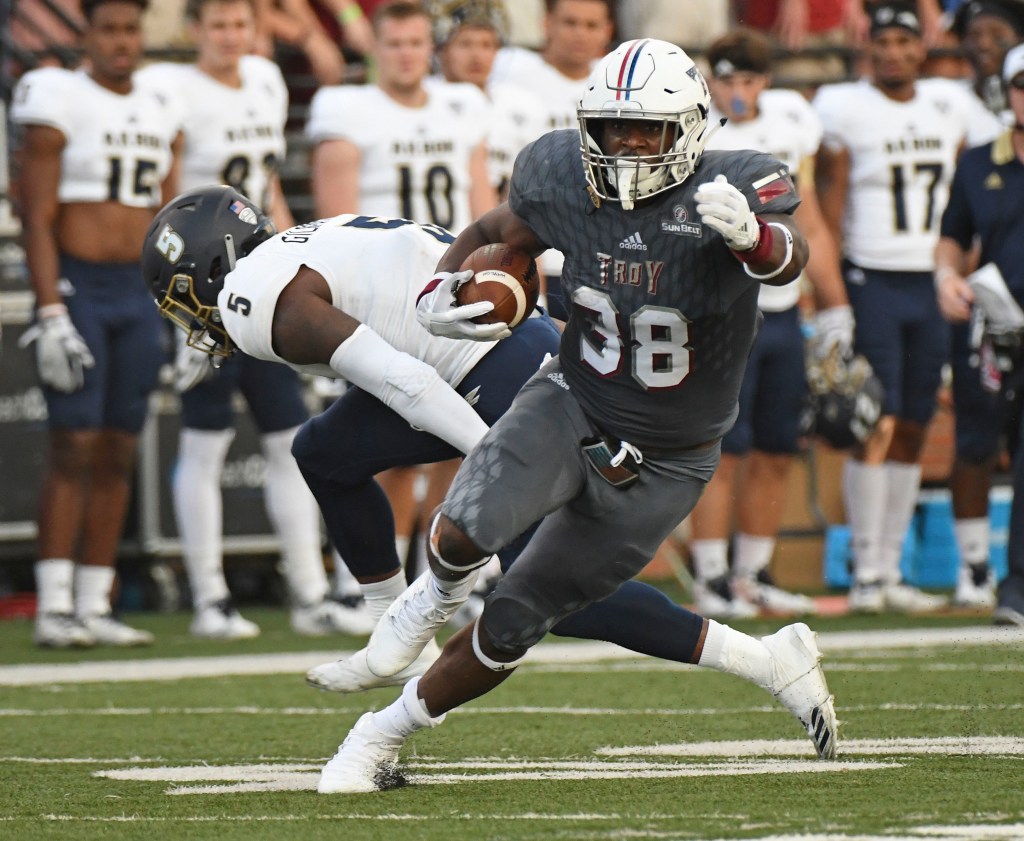 Troy running back Jordan Chunn (38) runs the ball past Akron linebacker Ulysees Gilbert III (5) during the first half of an NCAA college football game in Troy, Ala., Saturday, Sept. 23, 2017. (Photo/Thomas Graning)

The Troy Trojans return home for their final Saturday game of the year when they host the winless Georgia Southern Eagles.

“They’re a team we have a lot of respect for, a team that has had our number,” Brown said. “As much as we have respect for Georgia Southern, it’s about us. We got a win, got us to 5-2; now we have to continue to progress and correct the things we made mistakes on last week. I still don’t think that we’re playing our best football in any of the three phases.”

The Trojans had hopes of winning a conference championship last season with a win over the Eagles. Instead, the Trojans fell 28-24.

“They’ve had our number,” Brown said. “Last year, we didn’t necessarily play poorly; they were really talented. They had some bad breaks but were just talented. That wasn’t a game that we just blew; they made some plays down the stretch.”

The Trojans got back on track last Saturday with a 34-10 win over Georgia State. This week, they return home for the first time since their disheartening 19-8 loss to South Alabama in front of a national audience.

“I’m excited about getting in The Vet because, frankly, we were embarrassed the last time we were at home,” Brown said. “I know our guys are chomping at the bit, our staff is chomping at the bit to get back and perform well for what I think will be a really big Homecoming crowd.”

The Eagles made news last week when they fired head coach Tyson Summers after starting the season 0-6. They have named Chad Lunsford the interim head coach.

“I really feel for Tyson Summers and his family,” Brown said. “He was a graduate assistant here. He’s a guy that I have a lot respect for. I like him, personally. I think he’s a really good person, great family man and a really good football coach.”

The firing threw the Trojans a curve ball last week in that their option-style offense is always one that is difficult to plan for. The have run the option attack mainly out of shotgun, but with Lunsford at the helm all bets are off.

“It puts us in a really unique situation,” Brown said. “We’re going into our eighth game of the season and we have to prepare for a new head coach. It’s unique, I don’t think we’ve ever been in that situation before.

The Trojans defense features one of the top units in the country, number one in the country in red zone defense entering this week. The defense will have their hands full Saturday with two familiar foes.

“They have some really good skill players,” Brown said. “They have two running backs that have been there for a long time, Wesley Fields and L.A. Ramsby. They’ve had good games against us in the past. They’re really good players.”

The Trojans currently sit in a tie for third in the Sun Belt Conference. The Trojans hope to gain some ground in the upcoming weeks. The Trojans play four straight games against teams with sub-.500 records, but Brown and the Trojans will take all of them seriously.

“South Alabama was 1-4 before we played them and they kicked our tail,” Brown said. “The mentality has to be on who we’ve got this week. We don’t dictate the schedule. Some of those teams played ridiculous non-conference schedules. South Alabama played Oklahoma State and Ole Miss. I think that you just play who you got. Until you pointed that out, I really didn’t know that. We have Georgia Southern this week and we have to be 1-0.”