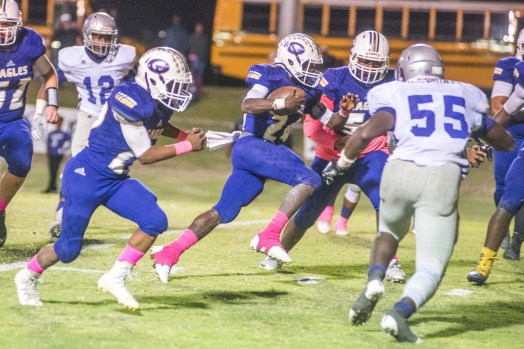 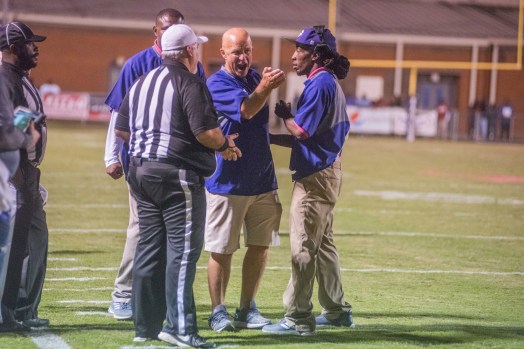 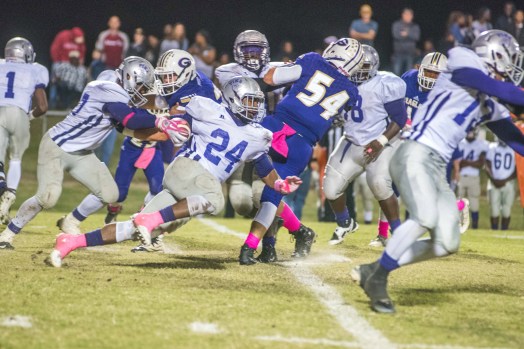 photo/Jonah Enfinger Pike County running back Zion Scott runs the ball for the Bulldogs against the Eagles on Friday night. 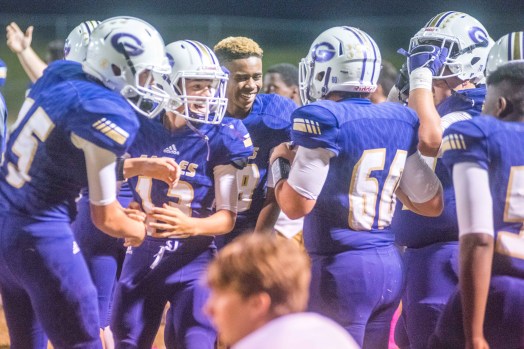 The Goshen Eagles sent their rival, the Pike County Bulldogs home with a 24-14 loss on Friday night in what head coach Bart Snyder ranked as one of the better moments since he has been a coach.

The win for the Eagles improves their record on the season to 8-1 and continues to improve their odds of winning a region championship.

“We needed that win more than anything,” Snyder said. “I am proud of the Goshen Eagle group and I am proud of the fans. We will enjoy this for a little bit, but it’s time to get ready for Brantley.”

The Eagles fell behind early and went into the half trailing by four and responded to even more adversity in the second half to pull out the win.

“The best thing that came out of tonight was playing a great team like Pike County,” Snyder said. “We overcame adversity.”

It didn’t take long for the Bulldogs’ run game to get going. On the fifth play of their opening drive, Jahzarian Lampley took a handoff 56 for a Bulldogs score to give them a 6-0 lead. The Bulldogs had an opportunity to hold the Bulldogs to a three-and-out, but Rayshawn Reynolds pushed the pile on a third and one and got the first down to extend the drive.

The Eagles couldn’t get on the board in the first quarter, but good punting by Dawson Hamlin kept the Bulldogs off the scoreboard for the rest of the quarter. Two of Hamlin’s punts pinned the Bulldogs back inside their 10.

Bryan Galloway 34-yard catch got the Eagles inside the Bulldogs 20, but Dawson Hamlin missed a 27-yard field goal to end the drive.

The Eagles finally broke through late in the second quarter. Damion Passmore took a Brock Snyder handoff 35 yards for Goshen touchdown to give them a 7-6 lead with 1:17 remaining in the half.

The Bulldogs answered immediately with a 100 yard kickoff return. Rayshawn Reynolds added the two-point conversion and the Bulldogs retook the lead at 14-7.

With just two seconds remaining in the half.

Hamlin made up for his missed field goal with a 43-yard field goal as time expired to send the game into halftime with the Bulldogs holding a 14-10 lead over the Eagles.

The Eagles had a touchdown taken away on a hurdling call that sent Snyder into a furry. After a long discussion with an official, he kicked his shoe off and it flew as high as a Hamlin field goal.

“I still don’t understand. A year later I won’t understand that,” Snyder said. “It is a rule; it’s just never called. You see it everywhere. We battled through and we got the win so it didn’t hurt, but it could have.”

After replaying the down, Snyder’s pass was intercepted by Lampley near the goal line.

The scored remained 14-10 heading intot he fourth quarter, but the Alford got his touchdown with 9:31 remaining in the game to put the Eagles up 17-14.

Alford officially put the game out of reach on a 30-yard touchdown run to bring the score to 24-14 after the successful extra point attempt.

“I don’t usually say things about kids because it’s a team effort, but if these colleges can’t look at a kid that has a 25 on the ACT and have a ball game like this,” Snyder said. “He was playing with a dislocated shoulder. He put it on his shoulders and said give me the ball.”

Bart Snyder finished the game completing 10 of his 21 passes for 170 yards and a touchdown.

Alford led the Eagles in rushing with 110 yards and two touchdowns while Passmore had 67.

Lampley led the Bulldogs with 111 yards with one rushing touchdown.

The Eagles will close out the regular season next week on the road against Brantley, while the Bulldogs travel to take on G.W. Long