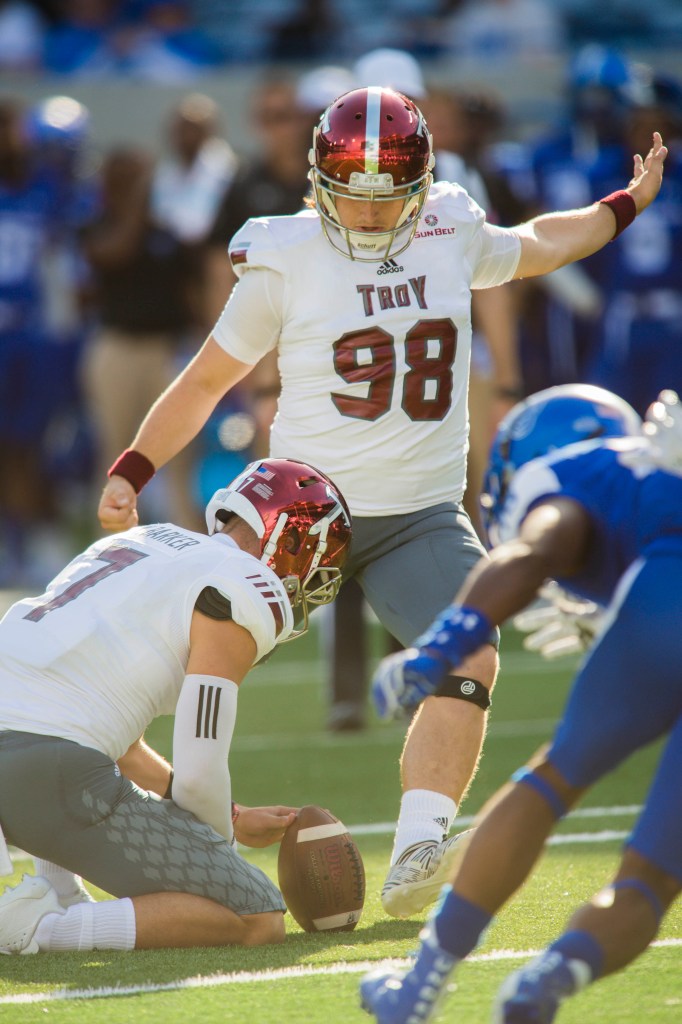 submitted Photo Troy kicker Tyler Sumpter (98) lines up a field goal attempt against Georgia State on Saturday, October 21, 2017. He made both of his attempts.

It’s been a carousel ride for Troy’s most important special teams unit so far this season. During the season’s first seven games, the Trojans have used three kickers. On Saturday, Tyler Sumpter put his hat in the ring and, after a solid performance, the Trojans hope he will be the last to get a ride.

Bratcher Underwood and Evan Legassey both got their opportunity to win the placekicking job, but after going a combined 4-10 on kicks with a long of just 39-yards, head coach Neal Brown felt compelled to make yet another change.

Sumpter made the most out of his two field goal opportunities going 2-2 with a long of 27 and making all three of his extra points.

Sumpter got the nod despite not kicking in a game since his junior year in high school at Spain Park. After Legassey’s struggles continued to mount in the South Alabama game, Brown went to Sumpter and told him to get ready.

“When I went back home, I had a session on field goals with him,” Sumpter said. “They had said, ‘Hey, this week, you’re going to be our guy.’ I had to get back into a rhythm. I kicked over the weekend a little bit, so when I got back to practice Monday, I was kind of already back in the rhythm of it.”

Sumpter stepped on the field for his extra point just minutes into the game and he admits his heart was racing.

“It was just an extra point. I’m not going to lie; I was very nervous,” Sumpter said. “I’ve been punting all season, obviously. All season, I’ve been super comfortable punting, and I’ve been doing pretty good, so I was confident. Kicking is a little different. If you mess up a punt, it can still be a good punt. If you miss a field goal, it’s like make or miss. When I went out there, I was kind of shaky. A little more nervous than I expected.”

Those nerves ratcheted up a bit more when he hit the field for his first ever collegiate field goal attempt from 27-yards out. Sumpter nailed the kick to extend Troy’s lead to 31-3.

“That was a little more nerve-wracking, honestly, than the extra point,” Sumpter said. “Extra points are kind of like a field goal’s little brother. Going out for a real field goal, it’s like, ‘Wow, I can put some real points on the board.’ I was a little more nervous than the first kick, but after it went through, I felt a bunch of relief. It was a weight off my shoulders. But I was really nervous.”

The redshirt freshman’s success was a relieving sight for his coaches and teammates.

“It just kept morale up,” said offensive coordinator Kenny Edinfield. “He went in there and nailed it, and I think everybody was fired up because we had struggled a little bit. They’re all capable of doing it. They’ve just lost a little confidence, so it was good that he had some. He did a good job all week.”

“It’s great. I watch them now,” said quarterback Brandon Silvers. “When it goes in, there’s a lot of confidence going in there. Sumpter, after the South game, I think he went home and kicked. I talked to him and I was like, ‘Just kick it, man. Don’t think about it.

Sumpter has mainly been a punter this season and so far has been a success. He is averaging 40 yards per punt with a season long of 60 in the opener against Boise State.

Over the summer, I put in a lot of work,” Sumpter said. “I think, the beginning of the season was me getting mentally going. Coach Brown put me into a lot of pressure situations. I had to make a punt for us to not run; basically putting the spotlight on me and making me grow up real quick. Throughout the season, I’ve just been progressing. After a couple of games, I found some success.”

Working through pressure situations in practice paid off in Troy’s biggest win of the season against LSU. With Troy up late in the fourth quarter and the Trojans pinned back near the end zone, Sumpter got the ball off without getting blocked.

“Honestly, I was not expecting to punt because the game was almost over,” Sumpter said. “I had mentally prepared that, ‘Hey, this is over.’ We ended up having to punt. I think at first we had called a different punt where I don’t go in. I think it was a punt safe with Brandon.

“All Coach Brown told me was, ‘Kick it out of bounds.’ Coach Sumrall said, ‘Don’t let it get blocked.’ So, a lot of negative thoughts were running through my head. It was all a blur, honestly. When I got out there and lined up, we have like our cadence for snapping. All of a sudden, the ball is coming at me. ‘Wow, I have to catch this and kick it now.’ I rolled out and hit it in the corner. It ended up being pretty good. We covered it well. I was really nervous.”