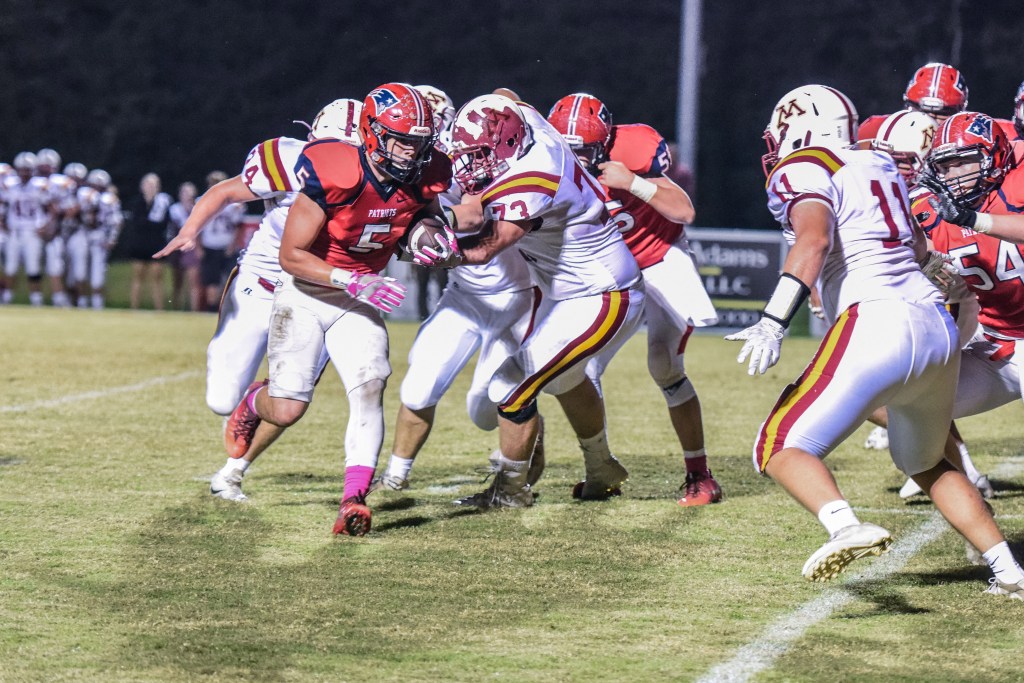 Messenger Photo/jonah enfinger Reed Johnson (5) runs the ball for the Patriots against Morgan Academy on October 20, 2017. The Patriots fell to the Senators 21-14.

The Pike Liberal Arts Patriots hope to enter the 2017 postseason on a high note with a win over Lee Scott in the season finale on Friday night in Auburn.

The Patriots lost a heartbreaker last Friday night in their region finale against Morgan Academy 21-14 to fall to 7-3 overall and 3-2 in the region, dropping them all the way down to a four seed in the upcoming playoffs.

“We learned from our mistakes,” said head coach Gene Allen. “We didn’t play very well. We had some people go in the wrong direction at times. There were a lot of things that we didn’t do well.”

For the third year in a row, the Patriots will face Lee-Scott (5-4, 3-2) to close out the regular season. Allen and the Patriots would like nothing better to head to Tuscaloosa next week with a win under their belt.

“We took a step backwards the other night,” Allen said. “We just have to correct our mistakes. Lee-Scott is a quality opponent. We want to go in there and get this win and get back on the winning trail, go into the playoffs on a winning note; but they are going to be a quality opponent.”

Lee-Scott is coming off a loss to the Patriots’ first round opponent, Tuscaloosa Academy. When asked if he got a jump on the game film for Tuscaloosa, Allen said it took all of his energy to focus on the Warriors.

“I am not who will look at Tuscaloosa right now,” Allen said. “I take them one at a time. If I were to start watching Tuscaloosa, I would be probably get confused thinking that Lee Scott did something that Tuscaloosa did. Obviously, I looked at them a little bit to get an idea of what they are doing. Right now, we are worried about getting a win against a good Lee-Scott team.”

Last year the Patriots played the Warriors in rare back-to-back games in the season finale and the first round of playoffs. The Patriots struggled stopping the heavy ground game. This season, the Warriors have thrown in a new wrinkle.

“They started the year off doing that,” Allen said. “Coach (Robert) Maddox didn’t think they had the line to do that, so they started spreading it in the last few weeks. They are predominantly a spread team right now. It wouldn’t shock me to see them go back to the two tight end wishbone stuff, but he hasn’t done any of that in the last few games.”

Other than simply getting a win, Allen would like to see his team clean up the mistakes as they head into the playoffs.

“We just want to clean up everything that we have been doing and doing it right,” Allen said. “We need to make sure everyone is on the same page and doing everything they are supposed to do.”

Kickoff is scheduled for 7 p.m. at Judd Scott Field in Auburn.