County rivals: Eagles square off with the Pike County Bulldogs 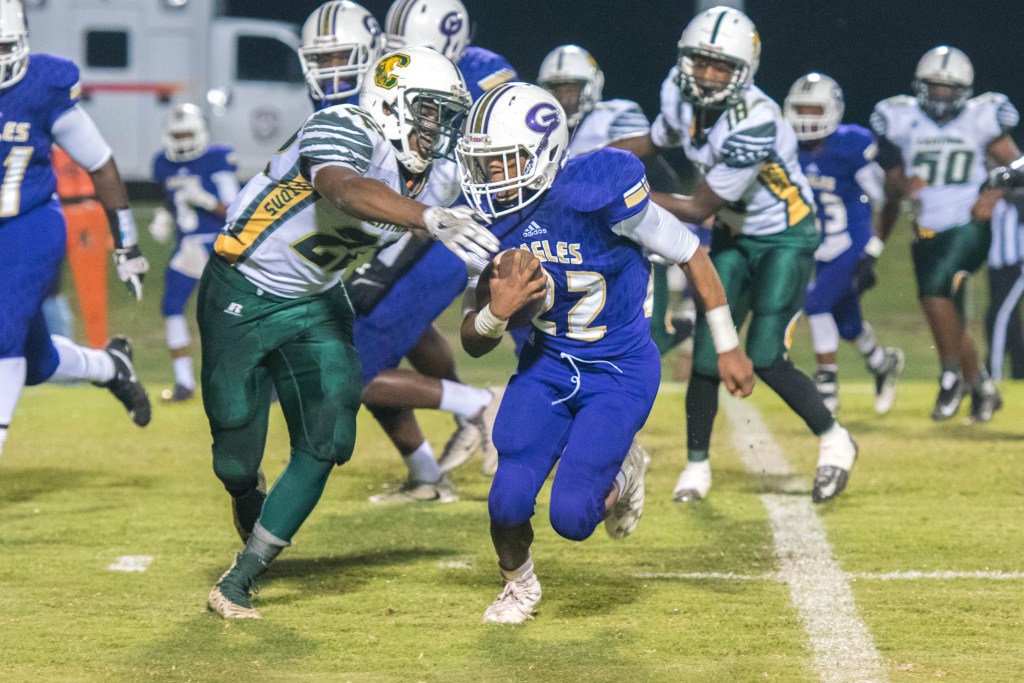 Damion Passmore (22) runs the ball for Goshen during a football game against Central-Hayneville on October 13, 2017.

It’s not too often that two teams from different classifications square off with a potential region title on the line. That will be the case though Friday night when the 2A Goshen Eagles host the 3A Pike County Bulldogs.

Elba fell to rival foe Luverne Friday night, creating a three-way tie between the Tigers squads and the Eagles. According to Goshen head coach Bart Snyder, the Eagles would be in great shape to claim their first region title under his guidance. Those wins would come against the 3A Bulldogs and 1A Brantley.

“There is a lot riding on this game,” Snyder said. “The guys have to be up. It teaches them a lot and it helps them get ready for things down the road. We have to get ready for a very good and very physical football team. We have to take care of our business and if we do that we have a good chance of being number one in the playoffs.”

The Bulldogs and Eagles are no strangers to one another. The cross-county rivals have played each other since 2009 with Pike County getting the best of the Eagles each year.

This week, knowing what is at stake, the Eagles are still treating this game just like the previous eight.

“For our guys, this is an ordinary game,” Snyder said. “We look at them one game at a time. It’s a big ball game for us first because it has playoff implications. A win gets us closer to at least hosting the first round of the playoffs.”

“They are going to do what they do,” Snyder said. “They have lost one ball game to a very good  Montgomery Academy team. They are a very big team. There is a difference in style of play. They will line up in the I with two tight ends, in spread and in the wing.”

The Bulldogs will carry a big offensive line to Goshen. The ongoing plan for Snyder’s Eagles has been to spread opposing defenses out and he plans to continue it against the Bulldogs.

“We hope it will be very difficult for them and hopefully we’ll be able to win.”