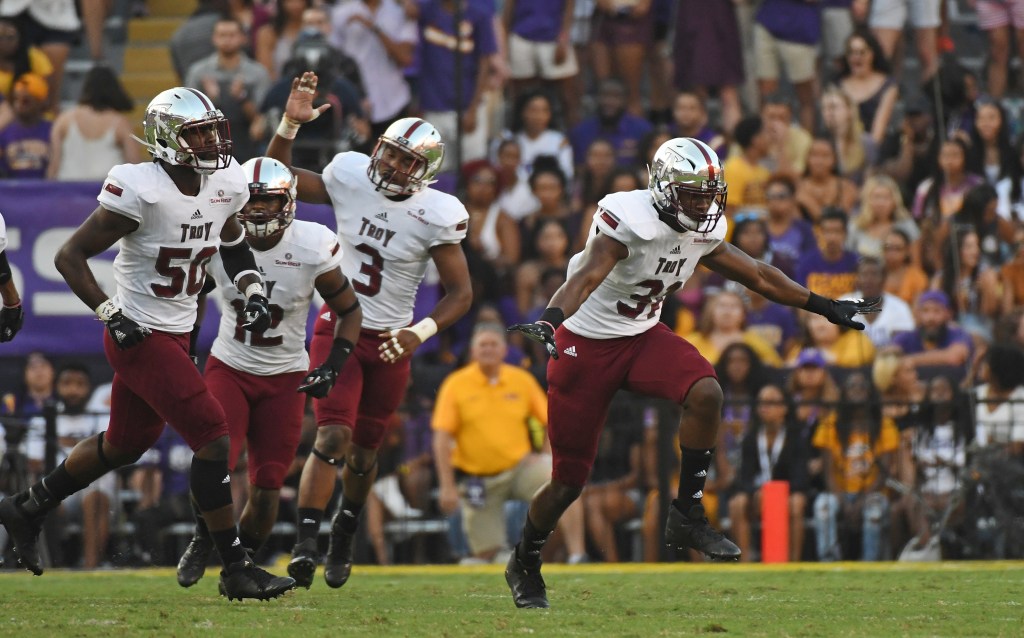 Troy linebacker A.J. Smiley (31) celebrates after an LSU turn over on downs during the first half of an NCAA college football game in Baton Rouge, La., Saturday, Sept. 30, 2017. (Photo/Thomas Graning)

The Troy defense has adhered to the “bend, don’t break” philosophy on defense this season earning the nation’s top ranking for red zone defense.

On Saturday, the defense held Georgia State out of the end zone for the first 59 minutes of the game before allowing a late score in the final minute.

“We really held them without a touchdown with our first and second group in the game,” said head coach Neal Brown. “We were really good in the red zone, which has been a strength of ours all year. We held them to only two big plays and that’s a group that had almost 700 yards the week prior.”

The Trojans spent a lot of time working on their red zone defense during spring and fall practices.

“I think it’s our mentality,” Brown said. “We practiced a lot of it, and were really intentional about it in the spring and fall camp. We did some type of red zone work every day of spring practice and fall camp. It’s showing defensively, but it’s not showing on offense. We’re stopping the run and it’s hard to throw the ball down there because there is no space.”

Defensive coordinator Vic Koenning credits Troy’s success to just doing to what they are supposed to do in key times of the game.

“I just think its like sometimes in life, the Good Lord is shining on you that day,” Koenning said. “Guys are maybe doing a little better job at what they are supposed to do. There are plays like the one when Tron (Folsom) kind of went out there and took a little spin and broke it up. That is what he is supposed to do. We are finally doing some things that we were supposed to be doing.”

The Trojans held the Panthers to just 52 yards rushing on Saturday and for cornerback Blace Brown, the success of the defense starts up front.

“It all starts up front with guys like Trevon (Sanders) and Jamal Stadom,” Brown said. “Those guys are where the defense starts. I think they just made a statement of ‘we are not going to be penetrated.’”

This week, the Trojans defense will be put to the test when they go up against the option attack of Georgia Southern.

“They have some really good skill players,” Brown said. “They have two running backs that have been there for a long time, Wesley Fields and L.A. Ramsby. They’ve had good games against us in the past. They’re really good players.