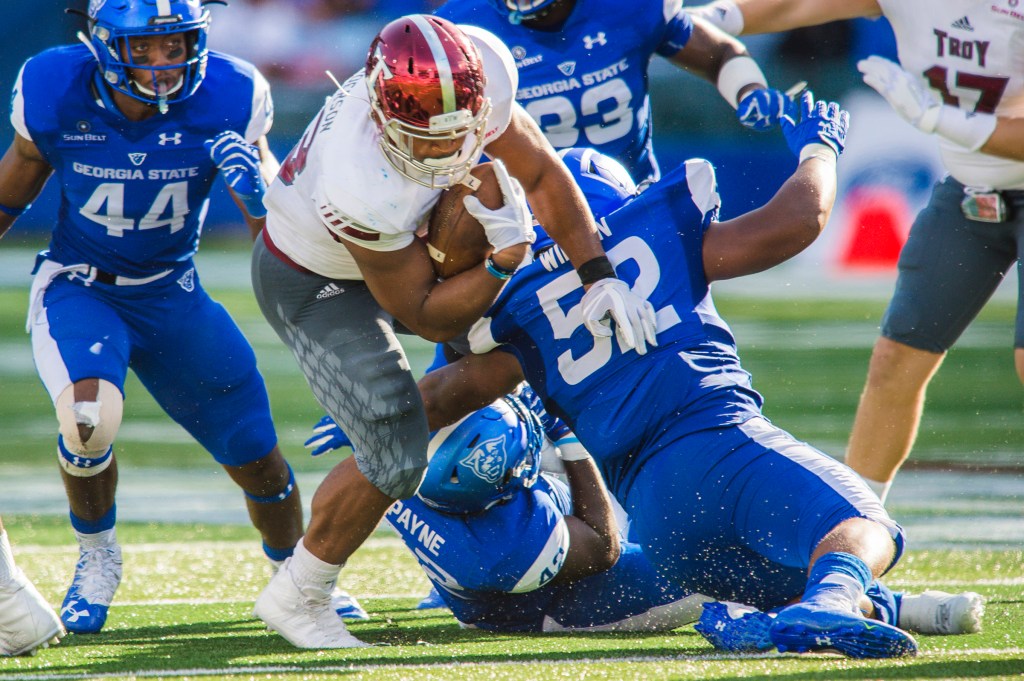 Troy running back Josh Anderson runs the ball for the Troy Trojans on Saturday afternoon against Georgia State. Anderson and the Trojans defeated the Panthers 34-10.

The Troy Trojans answered last week’s loss to South Alabama with a 34-10 win against Georgia State on Saturday afternoon in Atlanta.

During Monday’s press conference, head coach Neal Brown complimented his staff and players on a great week of preparation.

“It was a critical win for us over an improving Georgia State team,” Brown said. “It got us to 5-2 overall, 2-1 in the Sun Belt. Our staff did a good job getting our guys ready. It was by far our best week of preparation in the season; probably our most enjoyable week as far as coaching this team. I think they pushed each other and made it our best week overall; from how we performed on Saturday to the preparation leading up.”

After struggling against South Alabama, the Trojan offense started to make a turn in the right direction. Silvers had one of his most productive days of the season with 335 passing yards and two touchdowns. The Trojans finished with 457 total yards.

“Offensively, I was really proud of our staff,” Brown said. “I thought the offensive staff did a really good job of rebounding off a really poor performance the week before. We were different in the game. we had 7.9 yards per play and zero sacks. We made competitive plays for one of the first times all season. We made catches when people were on us and made people miss in space.

The Trojans expected to have running back Jordan Chunn back this weekend after sustaining a leg laceration against South Alabama, but Chunn was a non-participant come kickoff.

“I think he probably could have played,” Brown said. “He wasn’t 100 percent confident and I had a lot of confidence in our other guys. Josh Anderson was our primary guy running the ball in fall camp, so I was excited for him to get the opportunity to start.”

Anderson finished the game with 57 yards on 13 attempts and had one touchdown.

“Yeah, they stepped up all week,” Silvers said. “Josh stepped up in fall camp when Chunn was hurt, too. We went most of fall camp without Chunn. We know what Josh can do and know what Jamarius can do and know what BJ can do, as well. Jamarius had a few big runs and a few runs after catch, too. We want him (Chunn) in there, but if he’s not ready to go, he’s not ready to go. We’ve got other guys behind him.”

As for this Saturday, the Trojans will wait to see how Chunn responds to another week of recovery.

“It’ll be the same way this week,” Brown said. “If he feels confident and he’s 100 percent then he’ll play. If not, then he won’t play and those other guys will go in and get the job done.”

The nations twelfth-ranked defense continued their strong play against the Panthers. The first and second stringers held a potent Georgia State offense to zero points over the first three quarters.  They held the Panther running game to just 33 yards on 52 carries.

“We stopped the run,” Brown said. “We really held them without a touchdown with our first and second group in the game. We were really good in the red zone, which has been a strength of ours all year. We held them to only two big plays and that’s a group that had almost 700 yards the week prior.”

The Trojans shift their focus to Georgia Southern this Saturday on homecoming. The Eagles have beaten the Trojans in each of the last two years.

“I’m excited about getting in The Vet because, frankly, we were embarrassed the last time we were at home. I know our guys are chomping at the bit, our staff is chomping at the bit to get back and perform well for what I think will be a really big Homecoming crowd.

“We’re 2-0 in Homecoming games so far, so hopefully we get to 3-0 on Homecomings. Maybe we won’t be anybody’s Homecoming moving forward. I know we have big alumni groups coming back and I expect us to have a good crowd.”