Trojans look to get back on track against Georgia State 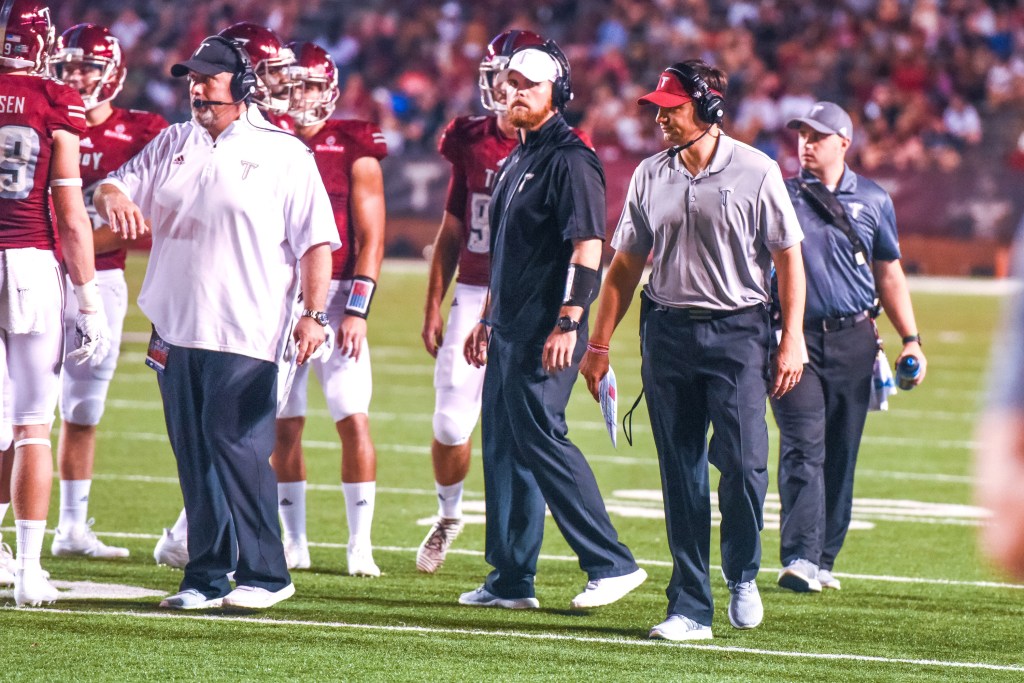 Messenger Photo/jonah enfinger Neal Brown and his coaches talk to their players during a game against South Alabama on October 11, 2017.

The Troy Trojans hope to get back to their winning ways when they travel to Atlanta to take on Georgia State on Saturday afternoon.

The Trojans (4-2, 1-1) look to turn the page after a disappointing loss to conference and instate rival South Alabama last Wednesday.

“That loss hurt and it should. We’re going to see what we’re about this week,” said head coach Neal Brown. “Adversity can do one of two things; it tears you apart or makes you stronger. I have full confidence in this team and these coaches that we’ll bounce back and be stronger. We’re going to prepare better this week and perform better Saturday afternoon than we did the previous week.”

The Trojans have played just two conference games so far this season and after going 1-1 in the first two, they find themselves sitting in sixth place. There are currently three teams that are undefeated in conference play and Troy’s upcoming opponent Georgia State is one of them at 2-0 (3-2 overall).

“Georgia State is a really good football team,” Brown said. “Shawn Elliott is a guy that we’ve thought really highly of for a long time. They started off with two losses and have rebounded with three quality road wins. His team will be excited about going home and playing for the first time since opening weekend.”

The Panthers have played in just two home games this season at their new home, formally named Turner Field, where the Atlanta Braves once called home.

“I haven’t seen it yet,” Brown said. “I have driven by it several times while they were making the changes, but I haven’t seen it. I am looking forward to it. I know their AD and coach Elliot were really excited about it; justifiably so. It’s really close to their campus.”

The Trojans were without Jordan Chunn for the second half against South Alabama due to a leg laceration. Brown believes his running back will be good to go on Saturday.

“We’re expecting him to play,” Brown said. “He had a leg injury that caused him to miss the second half. That probably hurt us because we had to throw the ball a little bit more than we wanted to in the second half.”

The Panthers are averaging 22 points per game to start the season. Quarterback Conner Manning is completing 67 percent of hiss passes with six touchdowns and he is averaging 252 yards per game.

“Their quarterback is Connor Manning and I think he may be the most improved player in our conference,” Brown said. “He is really playing at a high level. He threw for over 300 yards here last year in the second half. You can see his confidence continuing to grow.”

Troy quarterback Brandon Silvers along with the entire Trojan passing game continues to look for a more consistent attack. In last week’s loss to the Jaguars, the Trojans had 269 passing yards but lacked the big play, a common theme so far this season.

The defense is a weak spot for the Panthers. Georgia State is allowing 26 points per game this season, but Brown believes they have the playmakers, especially in the secondary.

“They play the run extremely well,” Brown said. “They have maybe the best corner tandem in our conference. They’ve played together now for three years and do as good of a job at covering as anybody in our league.”

The Trojans and Panthers have met just four times with Troy coming out on top in three of them, including a win last year 31-21.