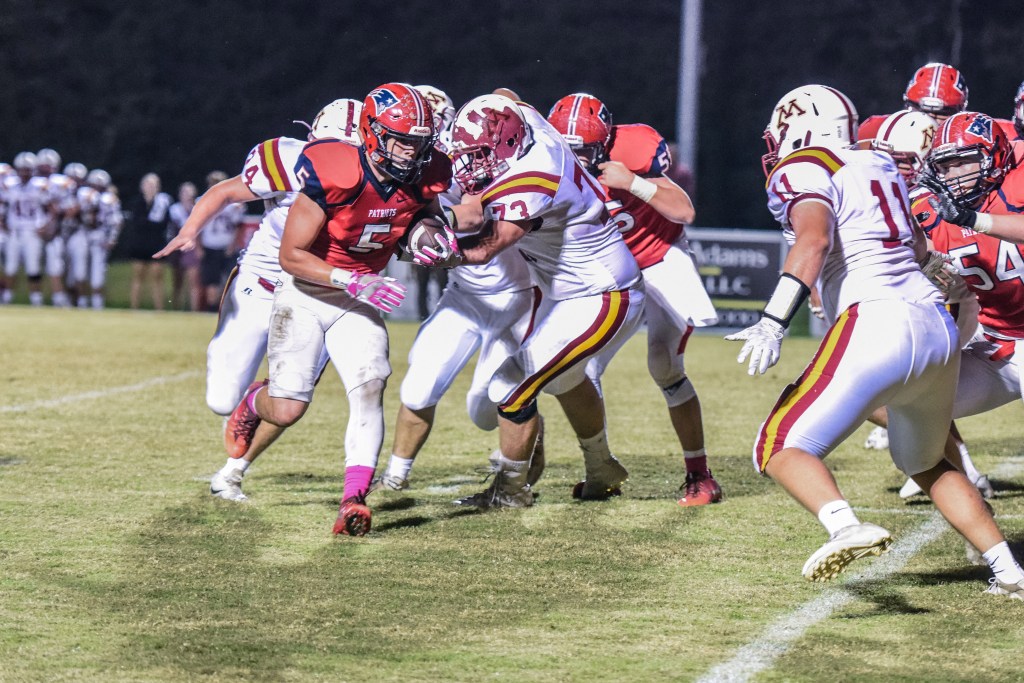 Pike running back Reed Johnson (5) runs the ball for the Patriots during their game against Morgan Academy on Friday night.

A late interception ended the Pike Patriots’ hopes of a comeback in a 21-14 loss to the Morgan Academy Senators on Friday evening.

“Our effort wasn’t very good,” said head coach Gene Allen. “To be honest with you, I didn’t think we played very hard. We played a little harder in the second half, but we kept killing ourselves. We got a big play and then a penalty. We got a couple big turnovers. We have to regroup and get on the same page. We play next week and then get ready for the playoffs.”

The first half was quiet when it came to scoring. The first points didn’t come on the board until the 4:01 mark of the second quarter.

The Patriots got called for six penalties in the half, including a sideline warning on the Pike Pep Band.

The half featured fumbles by both Pike and Morgan.

The Patriots had a chance to go up 3-0 early in the second quarter, but passed on a 23-yard field goal. Reed Jinright’s fourth down pass fell harmlessly to the ground, turning the ball over on downs.

Jinright finally broke the seal and scored the first points of the game on a 79-yard run to give the Patriots a 6-0 lead after a missed extra point.

The Senators answered on their very next drive. Quarterback Peyton Egbert connected with Ed Williams on a 13-yard completion to give the Senators a 7-6 lead with 2:18 remaining in the half.

The Patriots got the ball to start the second half. On the fourth play of the drive, Jinright’s pass was intercepted by Mason Perkins and returned 32 yards for a Senator touchdown to increase their lead to 14-6.

Two Patriots possessions later, Pike fumbled the snap, giving the Senators the ball in the redzone. On the very first play, Egbert connected with Williams for his second touchdown of the game, this time from 29 yards out to give the Senators a 21-6 lead.

Cody Hollis took the ensuing kickoff all they way down to the 11-yard line. Four plays later, TK Thomas rumbled in from one-yard out. He also converted on the two-point conversion to cut the Senators’ lead to 21-14 heading into the fourth quarter.

The Patriots had one final chance to to even the score midway through the fourth quarter. The Patriots went on a 10-play drive, but had thought to tie it up on play number four when Reed Johnson took one to the house from 40-yards out, but the play was called back due to holding.

Six plays later on a fourth down attempt, Jinright’s pass was picked off deep in Senators territory to end any hope of a comeback.

The Patriots will close out the regular season next Friday night when they travel to take on Lee-Scott.