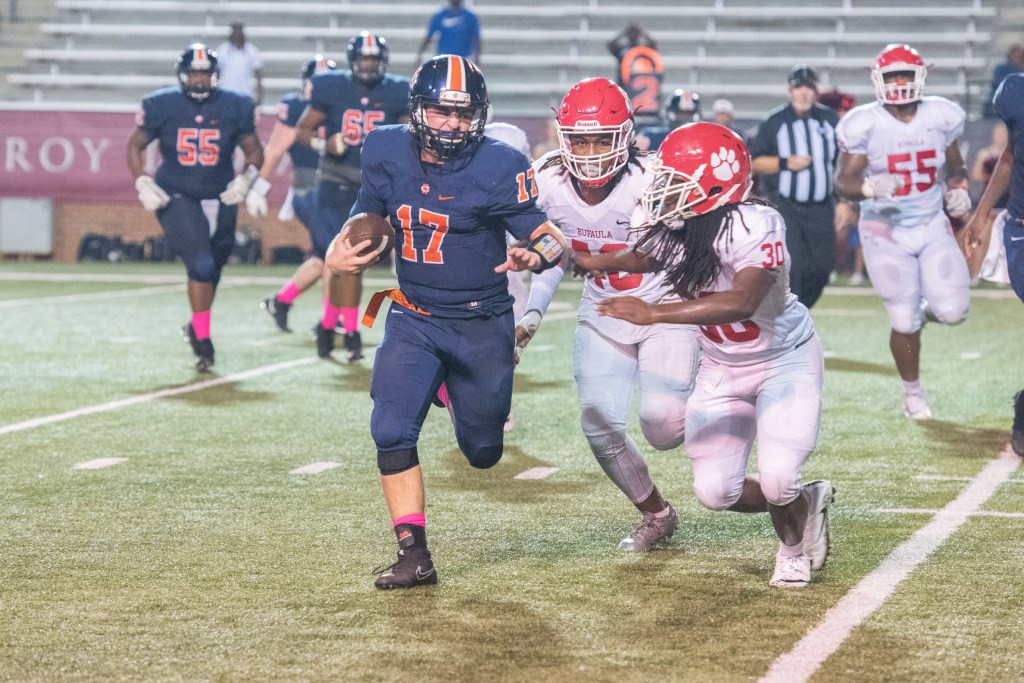 The Charles Henderson Trojans have a lot riding on a rare Thursday night game on the road against Rehobeth.

Despite a loss last week to Eufaula, the Trojans (3-4, 2-2) still control their own destiny when it comes to gaining a spot in the postseason. To feel comfortable, they would need to pick up a win in a game that was moved from Friday night.

“They changed the game,” said head coach Brad McCoy. “Ill be honest with you, I don’t know why we changed the schedule.”

The Trojans are no strangers when it comes to playing on Thursday night. Last season the Trojans made a trip to Dothan to take on Northview in a game they won 39-20. In 2015, the Trojans played back-to-back games on a Thursday night against Davidson and Sidney Lanier – both losses.

“You have to condense everything and get the game plan in,” McCoy said. “Practice has been good. We have adjusted it a little bit to adjust to the timespan. The two-and-a-half days that we got in have been pretty good. I think we have a pretty good game plan going into tomorrow night.”

The Trojans had a limited amount of time, but the first step was getting the sour taste out of their mouths after falling at home to Eufaula last week 23-20 having been on the doorstep of a comeback win.

“It certainly didn’t set us up for a very high morale,” McCoy said. “The kids were upset and frustrated that we didn’t pull that game out. We had a lot of opportunities to do so. We had costly turnovers that certainly hurt our chances in the second half.

“You have to move on. You can’t look back. We have two region games back-to-back.”

The Trojans do still have plenty to play for beginning this evening. Even though a home playoff game seems like a long shot, a win over Rehobeth will go a long way to securing a playoff berth.

“We still have some goals ahead of us,” McCoy said. “One of which is to be in the playoffs. If we can get into the playoffs we will probably have to travel, but hey –when you’re in, you’re in. You are back at 0-0 and anything can happen.”

Despite numerous injuries and a sub-.500 record, McCoy and the Trojans know they have a good team.

“We have a good football team,” McCoy said. “We have battled injuries, but I think we are starting to get those guys back. We still have to get our young linemen to execute at a high level and they have gotten better. Our guys are confident that we can right the ship and continue to improve.”

The Rebels are coming into tonight’s game with a 3-5 overall record and are on a four-game losing streak, including a 20-14 loss last week to Dale County.

“They have the same amount of wins as we do,” McCoy said. “They were playing good early and I think they are battling some of the same issues as we have. They have dropped some close ones the last four weeks.

“They are a good football team. They seem to always give us their best football game. Being on the road on a short week, we are going to have our obstacles for this ball game. We have to be ready to go.”