Girl power: Five players proving that football is no longer just for the boys 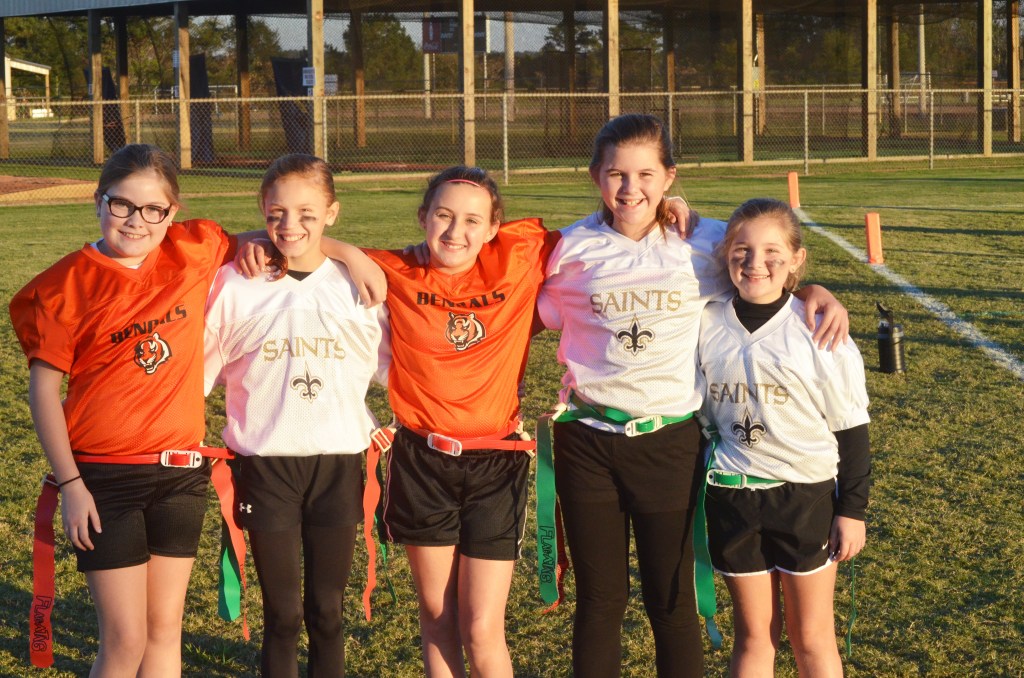 Five girls from the Saints and Bengals are getting their first taste of flag football this season at the Troy Sportsplex. Above from left to right: Ansley Watkins, Katherine Branson, Sutton Moore, Jaci Rushing and Kate Reeves. Inset: Katherine Branson gets ready before a play during a flag football game on Tuesday, October 17.

To the five girls of the Troy Parks and Recreation 11-and-under flag football league, football isn’t just a ‘man’s sport.’

The flag football league consists of five teams, but two of them – the Saints and the Bengals – have girls out there competing with the boys on their team.

The Saints have three female players in Kate Reeves, Katherine Branson and Jaci Rushing, while the Bengals are represented by Ansley Watkins and Sutton Moore.

And these girls aren’t just on the field to stick it the boys; they’re playing for the love of the game.

They are all in their first season playing flag football and, given the opportunity, they would love to keep playing.

“I like all of it to be honest,” Rushing said. “I like running, catching the ball and playing with my friends.

For Branson, it’s all about being one of the only girls on the field.

“(I like) being one of the only girls out there,” Branson said. “ It’s pretty cool.”

Watkins decided to play the game mainly because girls aren’t allowed to play tackle football and she wants to be part of the game in any capacity.

“The best thing is being able to play because girls can’t play tackle,” Watkins said. “It’s a lot different being one of the only girls, but it’s a lot of fun.”

Moore enjoys the physical activities that football has to offer.

“I love football,” Moore said. “I love running with the ball.”

When asked why she likes playing football with the boys, Rushing said with a chuckle “It’s fun; it’s a little competitive, but I am used to it with my family.”

It’s all about teamwork for Rushing and the others. They like the opportunity to be a part of a team where their teammates have their backs.

“They all encourage one another and they are really nice to play with,” Rushing said. “It’s fun to play with them.”

Branson likes how the Saints are small, but still have a lot of speed, and although they are smaller than most teams, she enjoys going up against the bigger teams.

“We are one of the smallest teams out here,” Branson said. “We have a lot of fast people and it’s really cool. I think it’s exciting because it’s different to play against the big kids than the smaller kids.”

Both teams, along with the three other teams in the league, begin the playoffs next week. The Saints have lost just one game, but they know they still need to work on some things to get to the Super Bowl.

“We probably need to run faster and work as a team,” Reeves said.