Trojans looking for more out of receivers 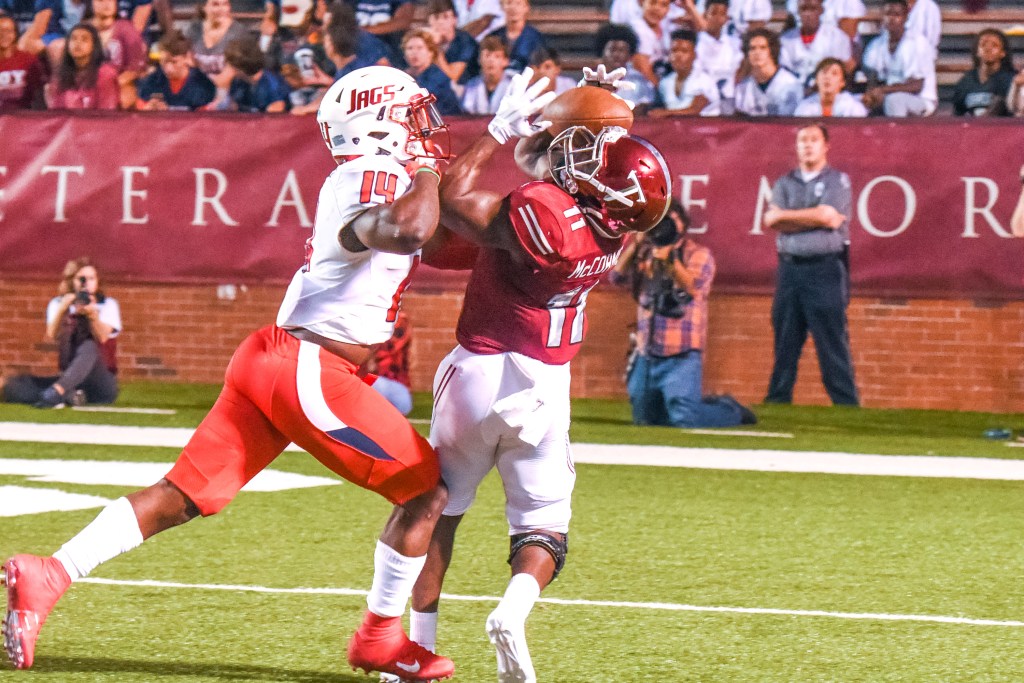 The Troy Trojan receivers entered the season with a lot of excitement with nearly all of their offensive production back from 2016. Six games in, they are still looking for consistency.

With Emmanuel Thompson, Deondre Douglas, John Johnson back, the hope was for the offense to get to an even higher level in 2017.

So far, head coach Neal Brown has been left disappointed in his receivers’ play and with the passing game as a whole.

“Its fair to say that I am disappointed with how we played there,” Brown said. “I am disappointed in our whole passing game performance honestly; how we have thrown it, caught it and protected it.”

When the Trojans played rival South Alabama last Wednesday, they accumulated 269 yards through the air but lacked when it came to completing the big plays.

“Just like at running back. Anybody can run through a hole that’s wide open and nobody’s there. Who’s the guy that’s going to run over the guy, make the guy miss, do like Chunn a week ago and break tackles? That’s what we have to have. When it’s wide open, anybody can do it. You have to be able to do it when somebody is covering you as a receiver.”

Brown called the performance of his receivers inconsistent, very similar to how the team as a whole has played throughout the season.

“Really inconsistent,” Brown said. “The game was the story of the season. We have been inconsistent out there especially at the X and the Z spot. At times we did a really good job and did what we were coached to do and got open and made plays. Other times we still had a high number of drops. Other times we didn’t get open on routes that we probably should have gotten open on just because we reverted back to old habits.”

The success of the passing game isn’t all on the receivers. It’s also on quarterback Brandon Silvers and on Saturday, Brown said, he didn’t play up to his potential.

“I think it works hand in hand. Brandon has not thrown the ball well,” Brown said. “He started the game throwing the ball and he was accurate. Later in the game he didn’t throw the ball as accurate. Do drops affect him? They shouldn’t because he is an older kid and he has played a lot of football. Did they affect him on Wednesday? I think they did.”

For Silvers and this offense, this is strange and unusual territory.

With history and experience as a guide, Edenfield believes it may just take one player and one big play to get the offense back on track.

“That’s been the case over the years,” Edenfield said. “I can name numerous games where that has happened. We’re kind of stale and not doing much. All of a sudden, somebody makes a play, whether it’s in the run game or pass game, and everybody gets excited.”

The one player could come from a different set of players. Brown believes that receivers Tray Eafford and Ishmail Saleem will get into the mix.