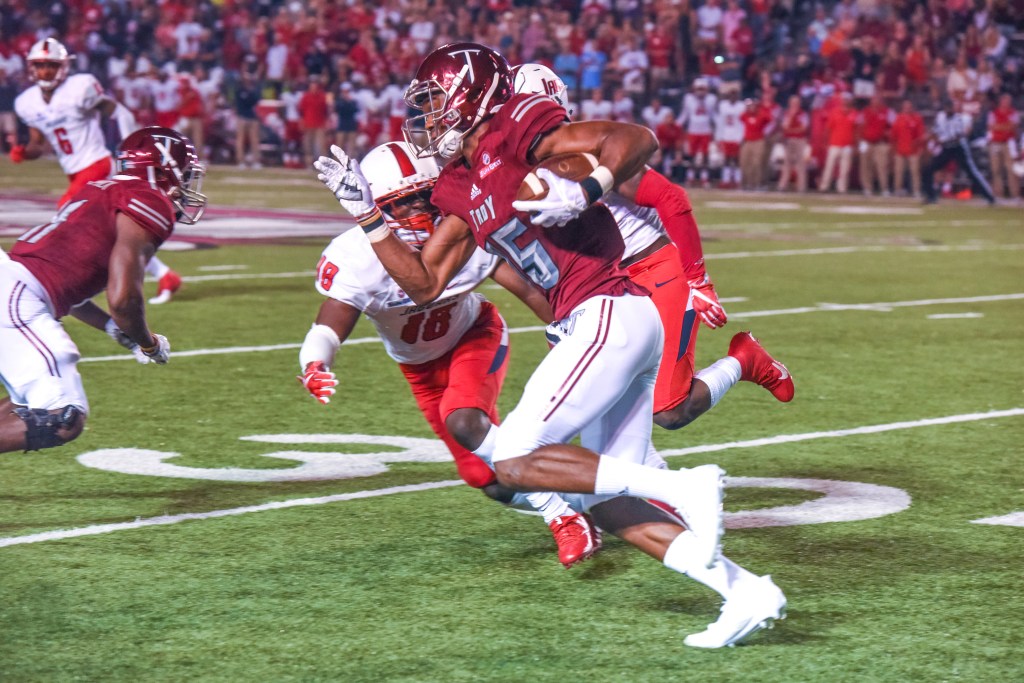 Damion Willis (15) carries the ball for the Troy Trojans in their college football game against the South Alabama Jaguars on Wednesday, October 11, 2017. The Trojans fell 19-8.

It’s been a wild ride for the men of Troy over the last two and a half weeks. After pulling off one of the biggest upsets in program history against LSU, the Trojans experienced a devastating loss 11 days later to South Alabama.

The loss dropped the Trojans to 4-2 overall over and 1-1 in conference play; five days later at his weekly press conference, head coach Neal Brown expressed that he was still disappointed.

“Football is an extremely humbling game, as we found out last week,” said Troy head coach Neal Brown. “Several other teams found out as well. I’m very disappointed in our performance last week. I talked in detail about that after the game. I’m not going to spend a ton of time on it.

After knocking off LSU, the Trojans were at the center of the college football universe, none more than Brown himself. Brown made numerous appearances on national media, while internally preaching the importance of drowning out the noise as well as telling everyone that their stiffest challenges are still on the horizon.

In the last three weeks, the Trojans have experienced the highest of highs and lowest of lows. Now Brown wants to see how his team handles adversity.

“That loss hurt and it should. We’re going to see what we’re about this week,” Brown said. “Adversity can do one of two things; it tears you apart or makes you stronger. I have full confidence in this team and these coaches that we’ll bounce back and be stronger. We’re going to prepare better this week and perform better Saturday afternoon than we did the previous week.”

The common narrative following the win over the Tigers was that Troy would benefit from their 11 days off leading to their game against the Jaguars. After a few extra days off, the Trojans turned the page once again: this time after a loss.

“We didn’t turn the page until last night. I think it’s important that we got away from football for a couple of days,” Brown said. “We brought them in on Thursday and then turned the page on Sunday. I think you look at it, when you have a disappointing performance, you either completely put it to bed or you use it as a teaching tool. There were numerous teaching tools in that football game.”

Offensive coordinator Kenny Edenfield and the Troy offense were eager to get back on the field.

“You want to clean that taste out of your mouth as soon as you can,” Edenfield said. “It took a few days before we practiced. You feel a little bit better after you practice. It’s always difficult. This game has a lot of highs and lows, unfortunately. I’ve been doing it a while. The lows are always low.”

One player that will benefit from a few extra days off between games will be running back Jordan Chunn who left the game with a laceration on his leg. Brown expects to have his stud running back on the field.

“We’re expecting him to play,” Brown said. “He had a leg injury that caused him to miss the second half. That probably hurt us because we had to throw the ball a little bit more than we wanted to in the second half.”

Chunn and the rest of the Trojans will head to Atlanta this Saturday to take on Georgia State.