Eagles soar to victory: Eagles offense too much to handle in 59-0 win 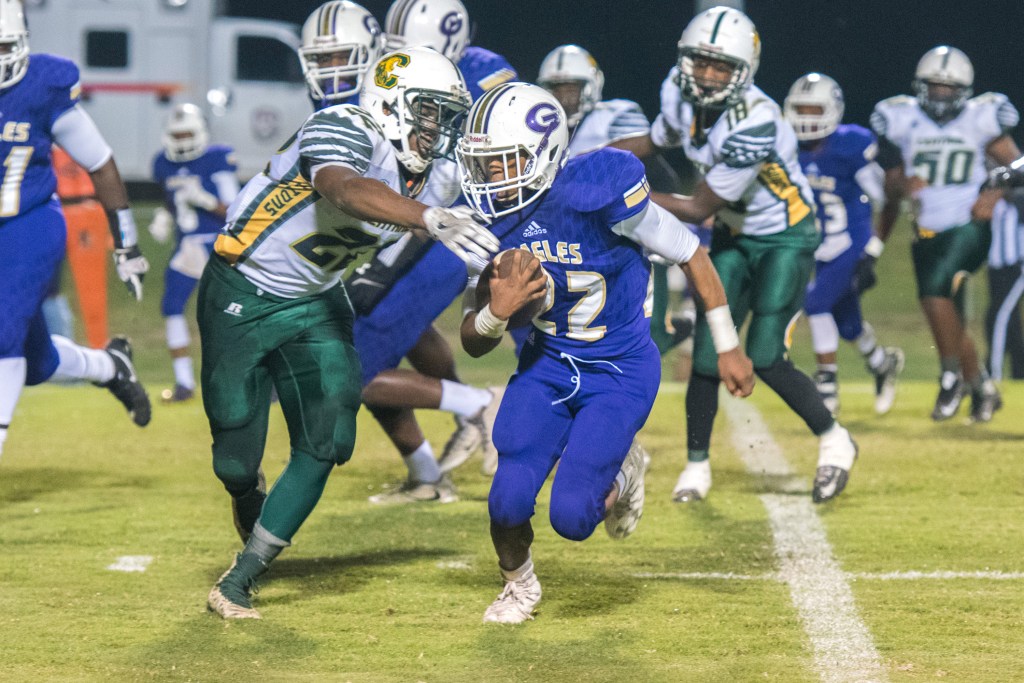 Damion Passmore (22) runs the ball for the Eagles on Friday night against Central-Hayneville. The Eagles defeated the Lions 59-0 on homecoming.

A week before their pivotal region showdown with New Brockton, the Eagles took care of business against Central-Hayneville Friday night with a 59-0 victory.

With the win, the Eagles improve to 6-1 overall and 4-1 in region play.

The Eagles drew inspiration from a good source Friday night. Goshen student Chris Chambers, who was recently diagnosed with cancer, worked with the team before the game and led them out of the locker room.

“They were challenged before the game by young man Christopher Chambers,” said head coach Bart Snyder. “He wants to be out here with us. Right now he is battling a larger battle than the game of football. He led us through our stuff and our guys played for him tonight.”

The Eagles scored in all but one of their first half possessions to gain a comfortable early lead on their way to a homecoming win.

“It was homecoming,” Snyder said. “I am glad for the alumni. We had all our players play against a real good ball team.”

After a quiet start, the Eagles jumped on the board midway through the first quarter when Eric Williams capped off a four-play, 63-yard drive by hauling in a 53-yard touchdown pass from quarterback Brock Snyder to make it 7-0 at the with 4:33 remaining in the first.

The Eagles defense set Goshen up for their second score of the night. Jaquentin Daniels recovered a Lions fumble, giving the Eagles possession on the Lions’ 29. Three plays later, Snyder connected with Cory Peterson for a 6-yard touchdown pass.

After the Eagles stuffed the Lions on a fake punt attempt, they went on a six-play scoring drive capped by a 13-yard touchdown run by Damion Passmore. Snyder connected with Iyan Hinkle on a fake field goal to increase the Eagles’ lead to 22-0 with 11:28 remaining in the half.

The Eagles put the game out of reach when they scored on their fourth consecutive drive as Hinkle hauled in a deflected pass for an eight-yard touchdown to put the Eagles up 29-0 with 9:41 remaining in the first half.

On the next drive, Williams scored his second touchdown of the half when he picked off a Lions pass and took it more than 45 yards the other way for an Eagle touchdown.

The scoring streak continued when Snyder connected on a 32-yard touchdown pass to Hinkle for his second touchdown of the game to make it 43-0 with just over three minutes remaining before halftime.

Williams was the man of the half on Friday night. After his second interception, kicker Dawson Hamlin connected on a 36-yard field goal to bring the score to 46-0.

“That’s what we needed out of him,” Snyder said. “We needed people to step up and that’s what he did. I am very proud of his effort.”

The halftime break did little to slow down the Eagles. Passmore returned the opening kickoff 90 yards for a touchdown to increase the Eagles lead to 52-0.

Bryan Galloway picked off an Eagles pass on the following drive leading to a five-yard touchdown run by James Harris.

The Eagles will be back in action next Friday night when they host region foe New Brockton.