Eagles not looking ahead 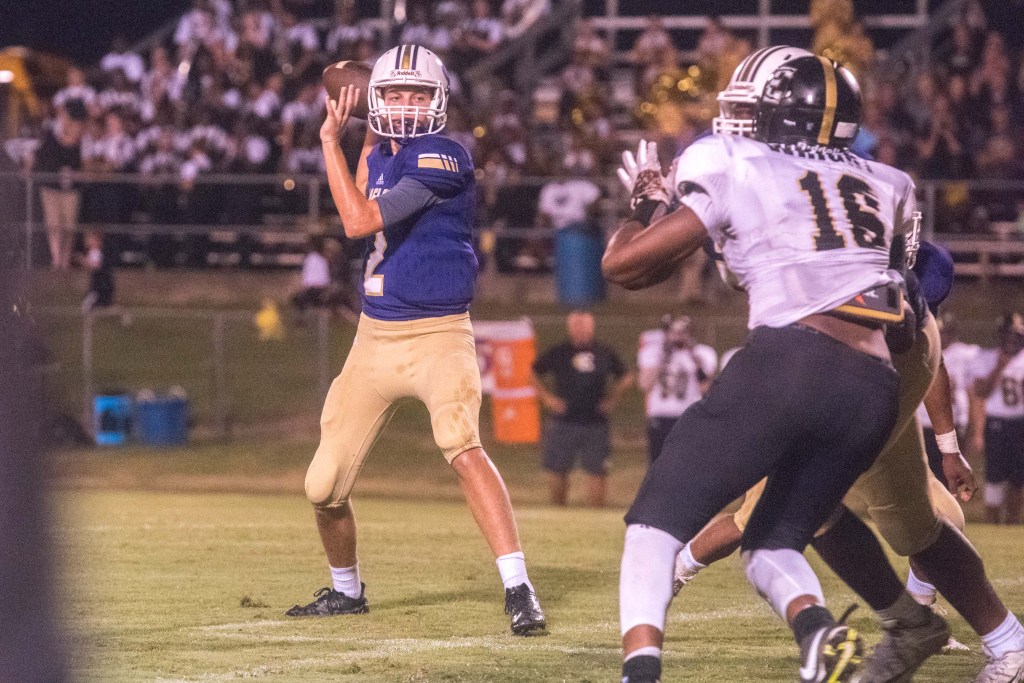 Photo/Jonah enfinger Goshen starting quarterback Brock Snyder (2) looks to throw a pass during their game against Elba on September 22, 2017. The Eagles take on Central-Hayneville this evening for homecoming.

The Goshen Eagles take on Central-Hayneville this evening for homecoming looking to keep pace with the first-place Elba Tigers.

The Eagles’ (5-1, 3-1) lone loss came to Elba early in the season, meaning they will need some help if they want to claim the top spot in region 3. First, the Eagles will have to contend with an improved Lions team that is currently 2-4 overall and 2-2 in region play. Last year the Lions finished 1-9.

There has been no shortage of potential distractions around campus this week as the Eagles are celebrating homecoming, but head coach Bart Snyder said the team had a more focused set of practices this week.

“They seemed to be more focused than they were over the last few weeks,” Snyder said. “We hope that is a good thing, but we don’t know. You have to wait and see, but they have been working extremely hard.”

Last week, the Eagles visited Jack to take on Zion Chapel and walked away with a 55-0 win. Even with the shutout, the Eagles feel like they left a lot on the field. So this week they’ve been working to fix some of their mistakes, including penalties.

“It’s never a good thing to be complacent,” Snyder said. “There were a lot of things that we saw on film that we did throughout last week and the game. It wasn’t the kind of ball that we are capable of playing and we want to get better. I think we made strides this week to fix some of those things.”

The Lions’ two wins came back-to-back against Zion Chapel and Calhoun, but they have lost three in a row since then to New Brockton, Monroe County and Elba.

“Coach (Quinn) Hambrite has done an outstanding job with these guys,” Snyder said. “They are very athletic and very big. They are probably the biggest team that we have played. They are a good ball team. What’s scary is, sooner or later, they are going to understand what it takes to win and it’s going to be tough against them to win.”

All season long, and ever since Snyder took over, the rule at Goshen is not to look ahead. With New Brockton on the horizon next week, the Eagles are sticking to that rule.

“The only thing we are looking at right now is Central,” Snyder said. “That is the only one we are playing and no one else exists.”