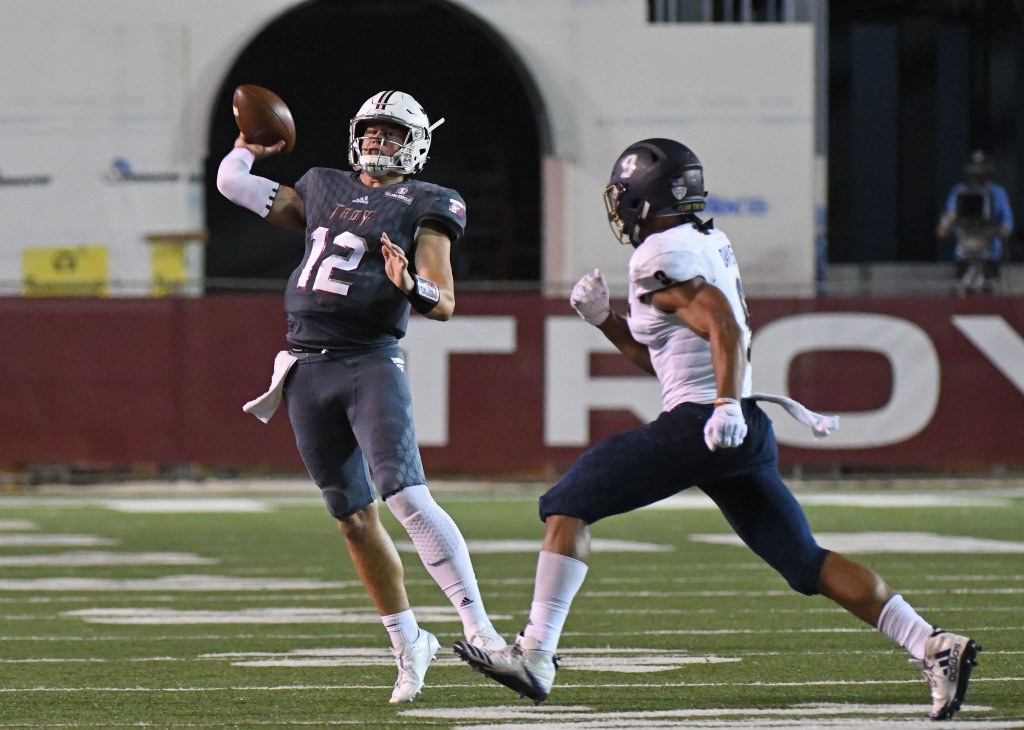 This evening’s rivalry game between Troy and South Alabama means a lot to a lot of people, but for quarterback Brandon Silvers and defensive lineman Bryan Slater, it means even more.

Slater, a Mobile native, and Silvers, of Orange Beach, are very familiar with the Jaguar program and the players on the opposing team.

“I know about five or six guys on the team and I got recruited by them,” Silver said.

Slater knows a little more than five or six that dawn the Jaguars uniform. Unlike Silvers, the Jaguars didn’t recruit Slater.

“I know about half the team I would say,” Slater said. “I actually didn’t get an offer from South. They didn’t recruit in Mobile that heavy when I was in high school, but that was during their earlier years.”

There is no shortage of excitement for Silvers when he gets to play the team across the bay from his hometown. With family and friends sure to make a visit, Silvers is ready to get things going.

“I am so jacked up. I don’t even need to get a pre-workout in; I am ready,” Silvers said. “This is just another rivalry game and I am trying to hold on until the game starts.”

Slater has a whole host of family and friends making the visit up the interstate to be in attendance.

“It’s like a homecoming, just being able to get all my family from back home and seeing them and playing against a hometown team,” Slater said. “That’s always a big game.”

Both these players have had their fair share of experience playing the Jaguars. Silvers has played in three of these games, going 1-2 against the Jaguars so far. In his two first games against the Jaguars, Silvers completed 25 of his 53 passes for 208 yards and had three interceptions and one touchdown.

“He did not play well the first two times he played South Alabama,” said Troy head coach Neal Brown. “I think part of it is because that’s the area he’s from. I hope he’s to the point now – he’s 23 years old – I hope some of that is by him.”

Last year it appeared that Silvers turned the corner against the Jaguars when he completed 28 of his 42 passes for 395 yards with a touchdown in Troy’s 28-21 win over South Alabama in 2016.

“His stats were really good last year, but he did not play close to his potential,” Brown said. “I haven’t really spent a whole lot of time talking to him about playing South this week or who the opponent is.”

Slater has a quieter role with the Trojans when it comes to playing time, but that doesn’t mean he hasn’t played a role on Saturdays. His role is limited to back-up duty on defense and he also spends a lot of time on special teams. When he is not on the field, he is still a leader.

“It’s a team game,” Slater said. “Whatever helps the team, that’s the common goal. We all have one goal, and whatever my role is, it’s a team sport.”

For the coaches, Slater is a guy you could put anywhere and he can make an impact.

“Slate, we call him Slate,” said defensive coordinator Vic Koenning. “That’s his nickname. I don’t know where that came from. He’s always had a good, positive attitude. He’s kind of a little bit of what they call a ‘putty guy.’ He kind of just fills in the cracks. A couple of years ago, he played a good bit. If he plays, it will be in a mop-up role now. He’s always had a good demeanor, a good attitude and has always been positive and does what he can.”

“First of all, he’s a great kid,” Brown said. “He’s already graduated, starter on two special teams, kind of a lunch-pail guy. He comes to work every day, does everything we ask him to do, he’s never on a list. He’s done a really good job for us on the shield on punts. He’s also on the field goal team. He plays some backup roles at defensive tackle. He’s probably as good a teammate as we have.”