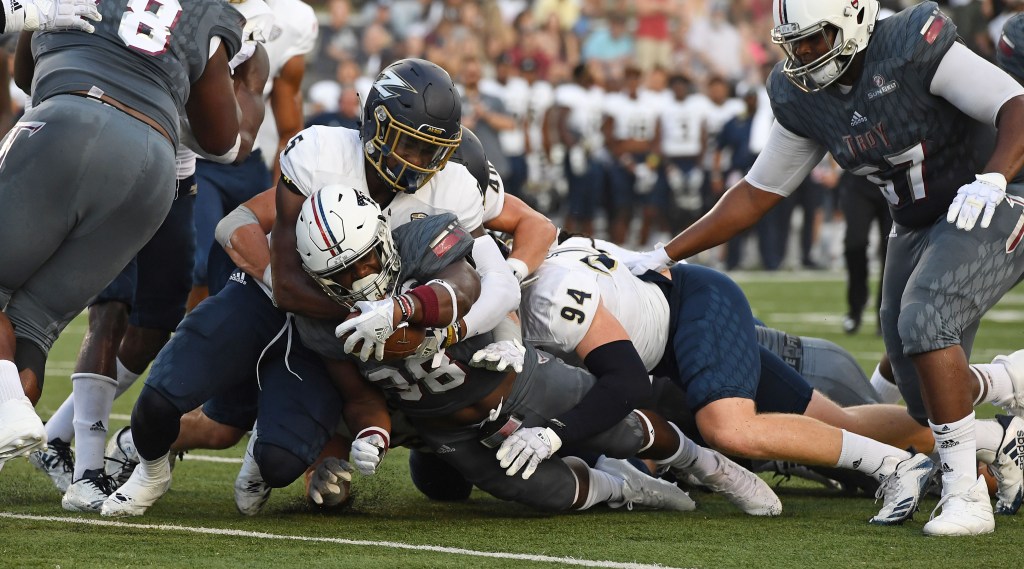 Troy running back Jordan Chunn (38) reaches across the goal line for a touchdown during the first half of an NCAA college football game against Akron in Troy, Ala., Saturday, Sept. 23, 2017. (Photo/Thomas Graning)

The Troy Trojans hope to hold the series lead when they take on rival South Alabama this evening for the “Battle for the Belt” at Veterans Memorial Stadium.

“It’s rivalry week,” said Troy head coach Neal Brown. “This is the biggest game on our schedule. I don’t make any ‘ifs, ands or buts’ about it; we put a lot of importance on this. It’s the ‘Battle for the Belt’ on Wednesday night on ESPN2.”

The game will be the only football game on the schedule on Wednesday night, meaning a lot of eyes will be on Troy when they take the field. In a similar situation last season, the Trojans knocked off South Alabama 28-21 in front of a national audience.

The Trojans are fresh off their win over LSU and a bye week and are excited about returning to conference play for the duration of the season.

“We work on our conference opponents more in the offseason than we did anybody else,” Brown said. “We didn’t play that well in our conference games down the stretch last year. We’ve changed some things with how we’ve practiced week in and week out. Our goal is to get to 2-0 in the conference.”

The Trojans won their conference opener on the road against New Mexico State on September 16. The Jaguars come into Troy with a 1-4 overall record and an 0-1 record after losing to Idaho in double overtime in the conference opener.

Head coach Joey Jones is in his tenth season at the helm.

“We have a lot of respect for Joey Jones and his staff and what they’ve done in a really short time with the football program there,” Brown said. “They’ve gone to multiple bowl games, the attendance at Ladd-Peebles has increased and they had a player chosen in the second round of the NFL Draft last year. It’s really incredible when you just think about their 10-year history of having a program.”

The Trojans are averaging 18 points per game through the season’s first five games. They will have to contend with new offensive coordinator Richard Owens and a Jaguar offense that scored 23 points in a losing effort against the Vandals.

“Offensively, they have a new coordinator with Richard Owens,” Brown said. “I thought he did a really nice job in a tough situation against Louisiana Tech. He’s had a couple of weeks now to get more comfortable in that role. He’s got a really good offensive background.”

This evening, the Trojans will have to contend with running back Xavier Johnson who has rushed for 345 yards this season including a 155-yard effort against Idaho.

“Their running back, Xavier Johnson, is a kid that’s hurt us the past couple of years,” Brown said. “He’s a downhill runner that very seldom goes down on first contact. It takes more than one person to tackle him.”

Troy quarterback Brandon Silvers enters the game with a 63 percent completion percentage and 1,241 yards through the air, but he has thrown just two touchdowns, a number the offense would love to see increase.

“Obviously the touchdown passes are missing,” Silver said.” I don’t really know, I feel like I have been playing at a high level; it’s just that one stat that is not there.”

“First of all, we’ve got to break some tackles and connect on some explosive pass plays,” Brown said. “The other thing is we’re running the ball better. Quite frankly, there are less things that can go wrong when you run the ball down in there tight. I don’t think it’s anything that Silvers or anybody is doing.”

The Trojans will have to go up against a defense that so far has let up 30 points per game.

“They’re pretty multiple, they’re aggressive and they run a lot of man coverage,” Brown said. “Depth at the defensive line position is what’s the most unique about them.”

The last time South Alabama paid a visit to Troy, they knocked off the Trojans 24-18. The Trojans look to hold onto the belt on their home turf tonight.

“It should be a great atmosphere Wednesday night,” Brown said. “Our guys are looking forward to it. The last time South was here, they beat us on our home turf to get the Belt in 2015. I think our students are excited.”