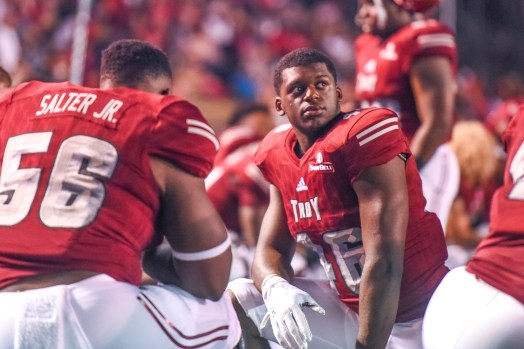 Linebacker Walter Pritchett (46) and defensive tackle Doug Salter Jr. (56) look on from the bench as the Trojans lose to South Alabama 19-8 on Wednesday, October 11, 2017. 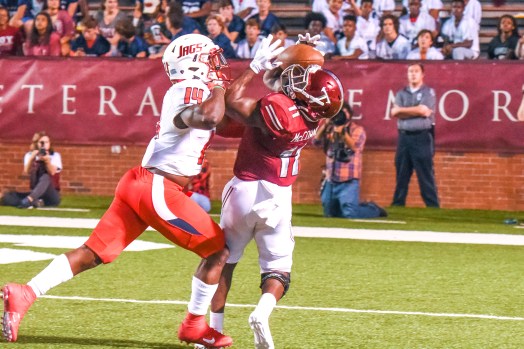 The Trojans couldn’t muster the same energy they had against LSU in a 19-8 loss to rival South Alabama on Wednesday night at Veterans Memorial stadium.

With the loss, the Trojans drop to 4-2 overall and 1-1 inside the Sun Belt Conference.

“Credit South Alabama,” said head coach Neal Brown. “A lot of credit needs to go to coach (Joey) Jones and his staff. Our guys were not ready to go tonight and that’s on me. It was an extremely disappointing evening.

“We have played six games. We played really bad in two of them, really good in one of them and very average in the other three. That’s where we are at.”

Four Trojan turnovers played a role in the Trojans loss. Two of the four came on special teams, while the other two came in a matter of moments in the first half.

After rushing for nearly 200 yards against LSU, senior running back Jordan Chunn was limited to 28 yards on 10 carries.

Chunn had to leave the game in the third quarter with an apparent leg injury.

“It was really a laceration,” Brown said. “They took him in and never came back. I didn’t have a chance to talk with Allyson Gramley our head trainer yet. I don’t know; it was obviously bad enough to where he couldn’t come back in.”

Quarterback Brandon Silvers, who has been starved for touchdown passes, struggled to get anything down the field on Wednesday. He completed 24-46 of his passes for 263 yards and threw one interception.

The game was a defensive struggle throughout most of the opening quarter. There was a total of three three-and-outs in the game’s first 12 minutes. South Alabama broke the scoreless start thanks in part to a Troy fumble. After a three-out-by the Jaguars, Marcus Jones fumbled the football and the Jaguars recovered. South Alabama capitalized on a one-yard touchdown run by a leaping Xavier Johnson to make it 7-0.

The teams combined for just 98 yards in the opening quarter with the Jaguars holding the 7-0 lead to start the second.

Troy advanced into South Alabama territory in the beginning of the second quarter before turning the ball over for the second time on a Jordan Chunn fumble. Chunn fumbled twice in Troy’s last game against LSU.

After Jamal Stadom intercepted a batted ball for Troy, Brandon Silvers threw an interception for the third turnover in a matter of a few minutes.

With the Trojans pinned down on their own 1-yard-line, Chunn recovered his own fumble, but did so in the end zone for a safety – increasing the Jaguars lead to 9-0.

The Trojans had their best drive of the half as the second quarter came to a close. The took over on their own 29-yard-line and marched down to the Jaguar 7-yard-line. With two seconds remaining in the half, Evan Legassey hooked and missed a 17-yard field goal to send the game into halftime with the Jaguars still up 9-0 despite being outgained by the Trojans 154-73.

The struggles continued for Troy right out of the gate in the second half. South Alabama marched 64 yards on 11 plays and capped off the drive with a 14-yard touchdown completion to Malik Stanley from quarterback Dallas Davis to bring the score to 16-0.

The Trojans defense held the Jaguars on third down deep in their own territory, but Marcus Jones fumbled the punt for the second time in the game.

“Marcus has been really consistent,” Brown said. “He is going to be a really good player here. It wasn’t his night and he has to learn from it. He has a lot of football left.”

After a Jaguar recovery, Gavin Patterson converted on a 47-yard field goal, increasing the Jaguars lead to 19-0.

The Trojans finally got on the board with 6:16 remaining in the game when they capped off a nine-play, 81-yard drive with a one-yard run by Brandon Silvers. John Johnson dove over the goal line for a two-point conversion to cut the Jaguars lead to 19-8 with 6:16 left.

The Trojans attempted to get back to within seven points with 3:01, but Legassey missed his second field goal of a game, this time from 30 yards out.

The Trojans will look to rebound when they head to Atlanta to take on Georgia State on October 21.