‘Battle for the belt’: Troy and South Alabama to add a new chapter in an already intense rivalry 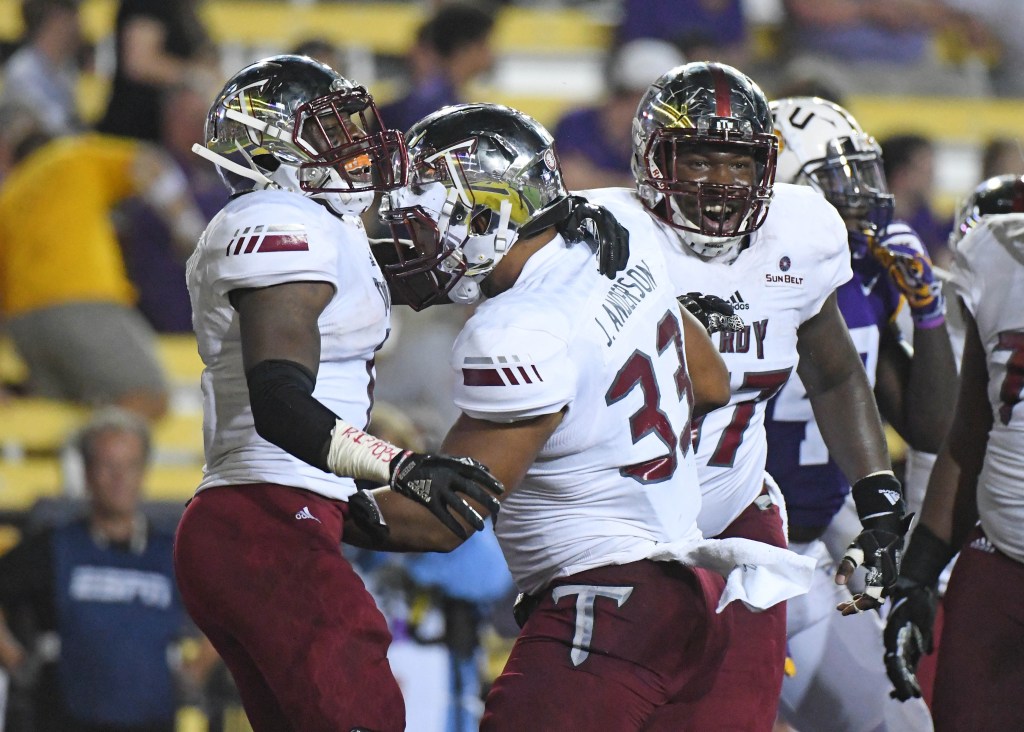 It’s rivalry week for the Trojans; the Battle for the Belt has quickly turned into an intriguing rivalry between Troy and South Alabama.

The rivalry will be rekindled on Wednesday evening in front of a national audience beginning at 7 p.m. on ESPN2.

“It’s rivalry week,” said head coach Neal Brown. “This is the biggest game on our schedule; I don’t make any ‘ifs, ands or buts’ about it. We put a lot of importance on this. It’s the Battle for the Belt on Wednesday night on ESPN2. It’s the only football game on in all of America. We look forward to showcasing not only our program, but our community and our university in this unique setting.”

The rivalry is still in its infancy stage compared to other well-known rivalries across the country, but the game between Troy and South Alabama has become more intense with each passing year.

Troy leads the all-time series three games to two, while the Jaguars have won two out of the last three. Troy won last year’s game in Mobile 28-21.

“They’ve both been close. They win a close game here, and then we win a close game down there,” Brown said. “I think they’ve been really competitive. I think they’re pretty evenly matched. It follows a trend of a lot of rivalry games. You can kind of throw out the records. Their record was a lot better than ours when we played here two years ago. They’d had some big wins last year, and we had a big win over Southern Miss and played Clemson close.”

Last season, Troy rode into Mobile with a 5-1 record and was a win away from being bowl-eligible for the first time since 2010. Jordan Chunn scored two rushing touchdowns in the fourth quarter to help give the Trojans the win.

“It got us to bowl eligibility, which was huge,” Brown said. “I think it had been since 2010 when our program has last played in a bowl game. That got us our sixth win. The way we were able to finish the game, that was really the first game where we came from behind late to win in a while. Getting to bowl eligibility and getting that belt back that had eluded us for two years in a row; I think that was probably big.”

The rivalry took a positive turn in last year’s contest. The championship belt was born the year prior, but things became more heated on social media last year. Students from both teams went back and forth and Troy took eight buses to Mobile on game day. The Trojans are looking for a response from Jaguars fans.

“I think their students are planning on traveling,” Brown said. “I think they’re bringing several buses up here. We have to do a good job. Our fans can’t just assume that just because we’re playing at home that we’re going to have a great atmosphere. We’ve got to do a good job of being ready.”

If the Jaguars bring fans by the busload, Quarterback Brandon Silvers isn’t worried about his fellow students responding.

For Kamryn Melton, the rivalry is all about familiarity.

“You can say it’s intense basically because we are neighbors,” Melton said. “We know a lot of guys down there. The coaches know us and our coaches know them. With that being said, they are going to give us all they got. No matter what their record or our record is, they are going to come up here and try to beat us on our own field like they did in 2015.”

For Silvers, the “Battle for the Belt” means a little bit more. Silvers grew up an hour southeast of Mobile in Orange Beach, Alabama.

“I am so jacked up. I don’t even need to get a pre-workout in,” Silvers said with a hint of sarcasm. “I am ready. This is just another rivalry game and I am trying to hold on until the game starts. We are just ready.”