Reason to celebrate: Patriots take out Northside on homecoming 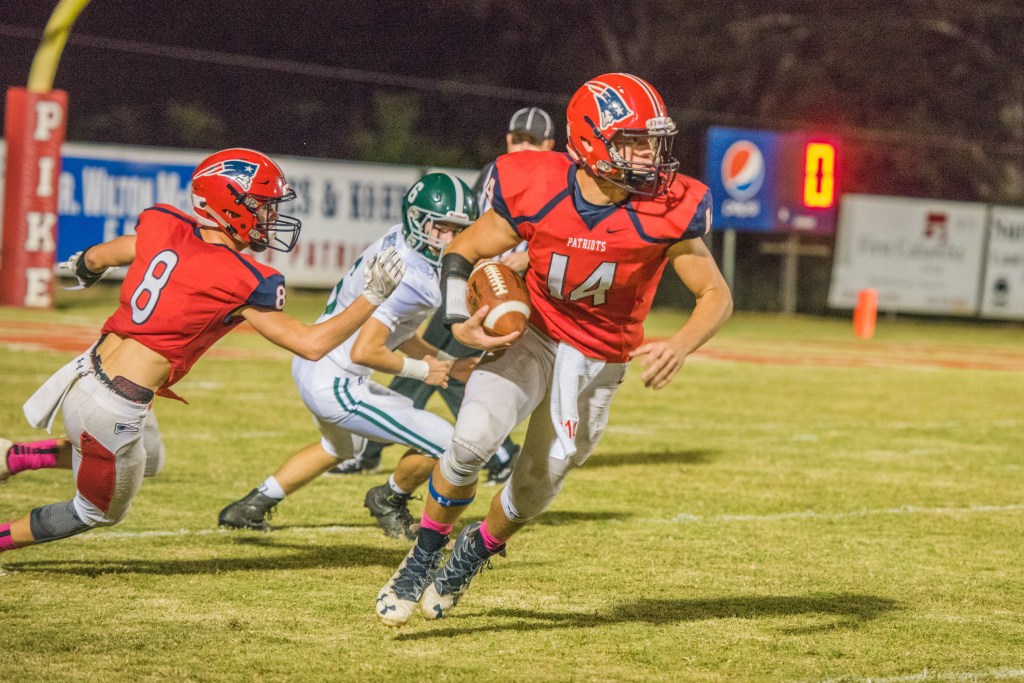 Pike Liberal Arts quarterback Reed Jinright carries the ball for the Patriots in a game against Northside Methodist on Friday night in Troy. The Patriots defeated the Knights 35-3

The Pike Liberal Arts Patriots controlled things from the opening kickoff and cruised to an easy 35-3 win over the Northside Methodist Knights Friday night for homecoming.

The win for the Patriots improves their overall record on the season to 6-2 and their region record to 2-1.

“It wasn’t the prettiest thing, but it was a big win,” said head coach Gene Allen. “We had a chance to play a lot of kids. It is homecoming too, so it’s going to end up being a good night.”

The Pike Patriots put on a defensive show in the first half. The Knights were able to pick up just four first downs, two of which came as the result of penalties.

On the night, the Patriots held the Knights to 107 total yards and forced four turnovers

“I thought we played pretty well defensively,” Allen said. “We had too many penalties. I felt like they couldn’t score on us if we didn’t help them out. We are getting better. I still don’t think we flew around to the ball like we did in the past, but it’s homecoming and it took a lot out of them.”

The Patriots jumped on the board early and often on Friday night. On their opening drive of the game, the Patriots went down the field on three plays and took a 7-0 lead on a 7-yard touchdown catch by Cody Hollis.

After holding the Knights for their third consecutive three-and-out, the Patriots increased their lead to 14-0 when Reed Johnson ran eight yards before fumbling at the goal line. Lineman BJ Burke scooped up the ball for the score.

Wood Jinright picked off a Knights pass on the corresponding drive to set up the patriots on the Northside 39. Four plays later, Max Copeland rambled his way for a 2-yard touchdown run to put the Patriots up comfortably 21-0 with 8:58 remaining in the first half.

Following a Camden fumble recovery for the Patriots’ second forced fumble of the half, the Patriots blew it open with an eight-yard touchdown run by T.K. Thomas to put the Patriots up 28-0.

With time expiring, the Knights capped off their most successful drive of the night with a 33-yard field goal to send the game into halftime with the Patriots leading 28-3.

The Patriots didn’t stop after halftime. After a successful onside kick recovery, the Knights couldn’t capitalize and the Patriots took over after another turnover, this time on an interception by Reed Jinright. Four plays later, Reed’s brother Wood Jinright scored on a 28-yard touchdown run to give Pike a 35-3 lead.

Reed Johnson completed seven of his eight passes for 72 yards and a touchdown. Thomas led the Patriots ground attack, rushing for 75 yards on 20 attempts with one touchdown, while Reed Johnson and Copeland ran for 44 yards and 39 yards respectively.

The Patriots will return to the road next Friday night when they travel to Hope Hull to take on region foe Hooper.

“It’s a region game so it’s must-win,” Allen said.  “Hooper is playing a lot better than they have been the last couple of years. Coach (Duane) McWhorter has done a good job with them and we have to be ready to play.”