Injury bug: Charles Henderson looks to right the ship on the road against Trinity 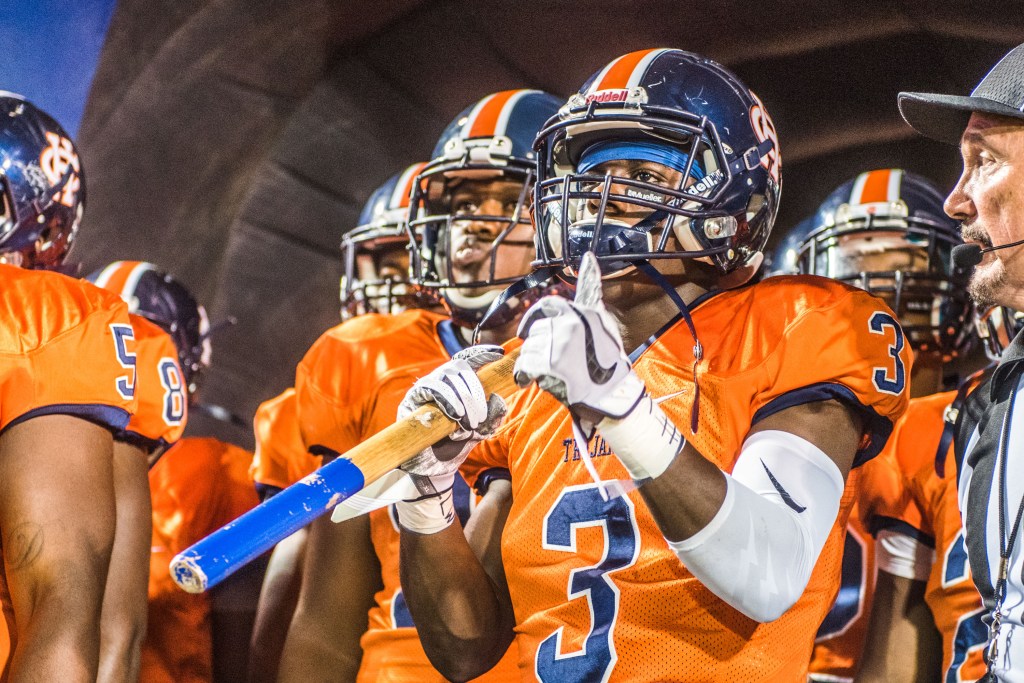 Cobi Jones (3) gets set to lead the Charles Henderson Trojans on to the field before their game against Stanhope Elmore last Friday night at Veterans Memorial Stadium. Jones is injured but head coach Fred Holland says he hopes to work Jones back into the game tonight against Trinity.

The Charles Henderson Trojans look to weather a rash of injuries when they travel to Montgomery to take on Trinity this evening.

Despite missing multiple players including DQ Toney and Cobi Jones to injuries, the Trojans had a productive week of practice as they prepare to take on the Wildcats.

“We have been steady and I think we have made some good corrections,” said Trojan head coach Brad McCoy. “We are ready to go tomorrow (Friday) night.”

Last week with the injuries mounting, the Trojans had their modest two-game winning streak snapped when they fell to Stanhope Elmore 20-14.

“We still have six guys out,” McCoy said. “We have been battling the injury bug a little bit. It came down to two big plays. We threw an interception that got returned for a touchdown and they completed a ball on the sideline and the kid took it the distance.

Coupled with the injuries, the Trojans made their fair share of mistakes in the game that hurt them.

“We made some mistakes throughout the whole thing that hurt us on certain drives. Right now, we are trying to piece the puzzle together and play some new faces that are having to fill in for these injured players.”

The Trojans have averaged 21 points per game during the season’s first five games. The offense has six players out with injury including three receivers and three offensive linemen.

“It’s going to come down to the players,” McCoy said. “It’s not rocket science when you don’t have players that have been with you for a long time, some that are seniors, and they are not in the lineup. You have guys that haven’t got a lot of reps and there is a lot of pressure on those kids.”

The injuries have taken the continuity away from the Trojan offense.

“When it comes to offense, you have to have continuity,” McCoy said. “When you lose some of those pieces, the continuity diminishes a lot. We are trying to get better and get the younger guys to fill voids.”

The Trojans have spent the last two weeks playing outside the region, but starting next week, the Trojans return for the final stretch of the season against Eufaula

“We have one more week of that (non-region games) and then we have three in a row in region play,” McCoy said. “Eufaula coming in next week, that is going to be a huge game. We don’t have time to think about it we have to find answers and get to work.”

This week the Trojans take on a 2-4 Trinity team from Class 4A. After winning their opener, the Wildcats have lost four out of their next five including a 45-18 loss to Montgomery Academy last week.

“They are a very sound disciplined football team,” McCoy said. “They are a spread team on offense. They are kind of multiple on defense. They give you multiple looks, really a lot like these other teams that we have been playing recently. They are good at what they do and they are not complicated.”

McCoy is hopeful that Jones will be ready to play on a limited basis this evening and hopes he will be closer to 100 percent in time for next week’s game against Eufaula.

“He is really the leader of this offense,” McCoy said. “We are going to try and get him back in the lineup tomorrow night. It will not be every play. We hope to get him back in a reserve fashion to kind of knock a little rust off.”

Kickoff between the Trojans and Wildcats is scheduled for 7 p.m.