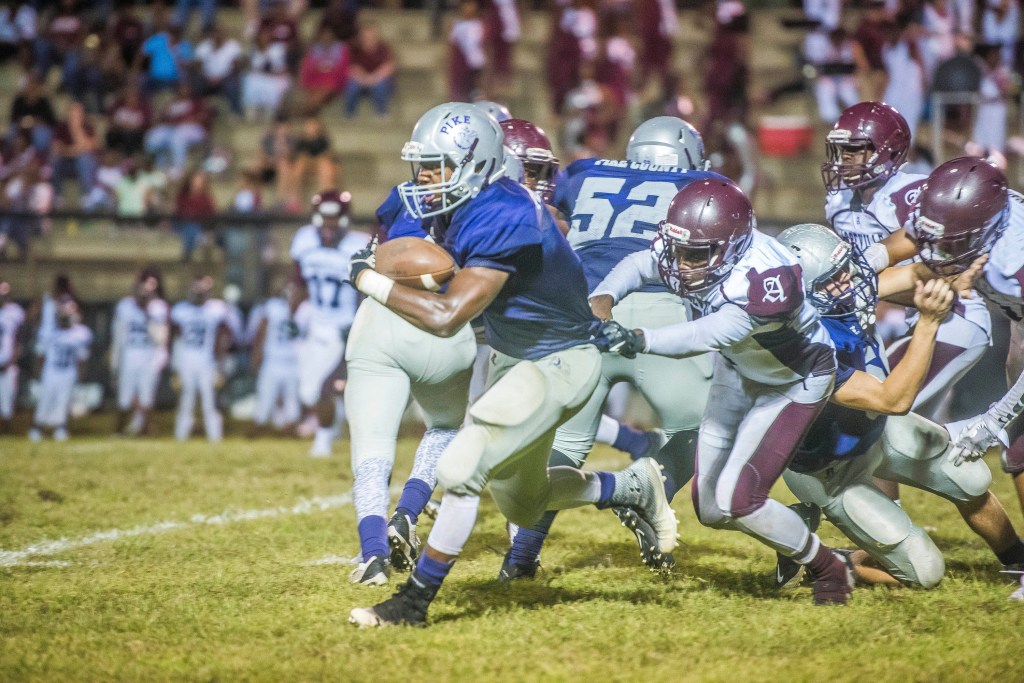 Messenger Photo/jonah enfinger The Pike County Bulldogs get set to take on Central Coosa in their final home game of the regular season this evening.

The Pike County Bulldogs will take on Central Coosa this evening in their final home game of the regular season.

After Friday, the Bulldogs (4-1, 2-1) will spend their final four games on the road, but before they shift their focus to road play, they plan on celebrating homecoming with a win.

“They are very excited,” said head coach Fred Holland. “Homecoming is full of festivities and the guys really enjoy it. They enjoy playing at home. Homecoming is an exciting time for everyone.”

Of course, homecoming week doesn’t mean much to the football team if they don’t cap it off with a win. The Bulldogs are focused on completing the task and ending the week on a high note.

“It’s not that hard to focus on what we need to do,” Holland said. “The players understand that it’s a region game. We are keeping the same schedule; we are not changing it much.”

The Bulldogs have enjoyed their time playing at home. Heading into tonight’s contest they have a 3-1 record inside the friendly confines of Bulldogs Stadium. Their only loss at home has come to region front-runner Montgomery Academy.

“We have enjoyed playing at home and not having to travel,” Holland said. “It’s been a good time for us.”

This week, the Central Coosa Cougars make their way from Rockford, Alabama to Brundidge. The Cougars are 0-5 to start the season.

Offense has been an issue for the Cougars so far this season. They have been shut out twice so far and are averaging just 4.8 points per game.

Even with the lackluster offense, Holland expects the Cougars to change things up offensively and his team needs to be ready for it.

“We are still looking at some of the things that they are doing,” Holland said. “They run a multiple offense. They will be in the wish bone, the I-formation and spread. They play with more linemen and try to power the ball at you. We will have our hands full with them.”

The defense has spent a lot of time on the field this season. Through the first five games, the Cougars defense has allowed 44 points per game.

“They are going to crowd the ball,” Holland said. “Hopefully we can have a good push up front where the game is going to be won. We try to preach that to our guys. Hopefully we will be alright on Friday.”