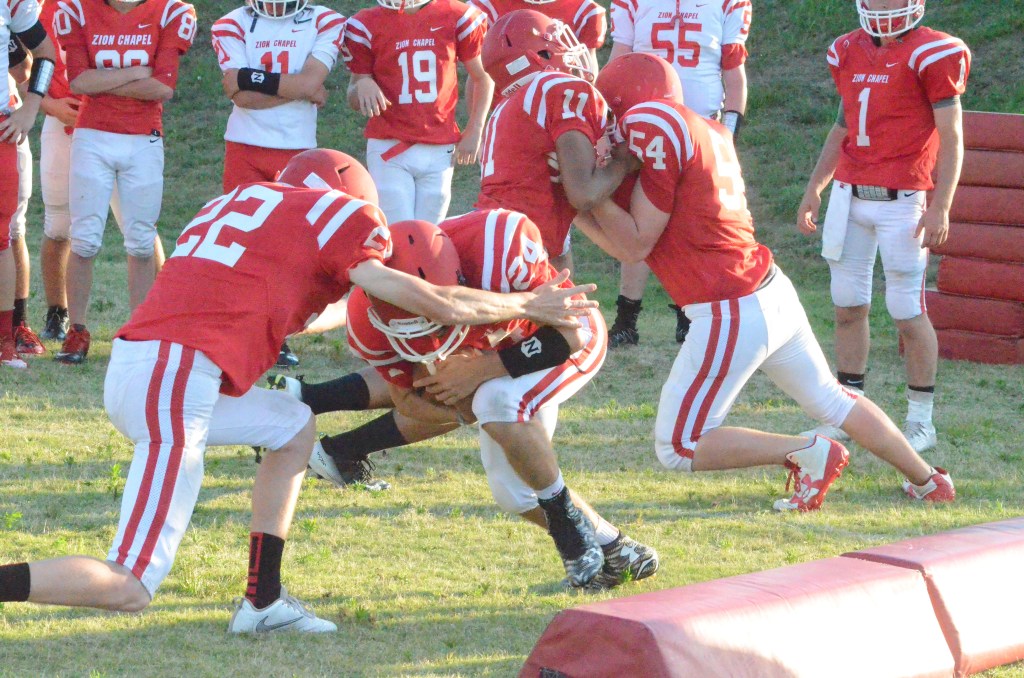 It’s been a tough go so far for first-year head coach Randy Bryant and the Zion Chapel Rebels, but they have a chance to turn the page Friday night against Goshen.

The Rebels have started the season 0-5, but despite their winless first half, the Rebels had what coach Bryant called their two best days of practice on Monday and Tuesday.

“I don’t know what that means for us,” Bryant said. “I thought there was more energy and more effort. Everything looked better between effort, energy and attention to detail.”

Last week the Rebels scored 22 points but fell to Kinston 56-22 thanks in large part to turnovers. The Rebels have scored 34 points in their last two games after scoring just 12 in the first three games. Now the Rebels are focusing on holding on to the football.

“We have made some strides, they have just been baby steps,” Bryant said. “We watch film every week and we point things out to our kids and tell them if you make this one block or make this one tackle or make a better effort here then you can win the football game. The end score doesn’t show it, but we have had chances in every game to be competitive and we just haven’t been able to seal the deal.”

The Rebels had visitors on campus this week in the way of Troy football players that included John Johnson, Seth Calloway and Jordan Chunn.

“They talked to our kids about giving effort and doing what your coach asked you to do,” Bryant said. “They changed coaches and Neal (Brown) came in and (they talked about) buying in with what a new coach is saying. That was a positive this week.”

This week the challenge gets ratcheted up a bit more when the Goshen Eagles pay a visit to Greene Memorial Stadium. The Eagles come into the game with a 4-1 overall record and a 2-1 record in region play.

“Goshen has their team of the century,” Bryant said. “We’re ready to play the game. I’m tired of all the talk and I am hoping our kids will show up and compete like we have taught them.”

To have a chance to compete, Bryant knows his squad is going to have to do everything the right way, even the little things, against a team like Goshen.

“Offensive efficiency and tackling on defense,” Bryant said. “Those will be the only two ways we can compete. Those are things every week that we stress.

The Rebels have had to battle their fair share of injuries so far this season, clearing the way for the younger players to see some playing time.

“We are banged up right now,” Bryant said. “We had several guys start the year for us that can’t play right now. We are having to challenge some younger guys, which is a good thing for the future.”

Kickoff is scheduled for 7 p.m. in Jack.