Eagles travel to Jack to take on Zion Chapel 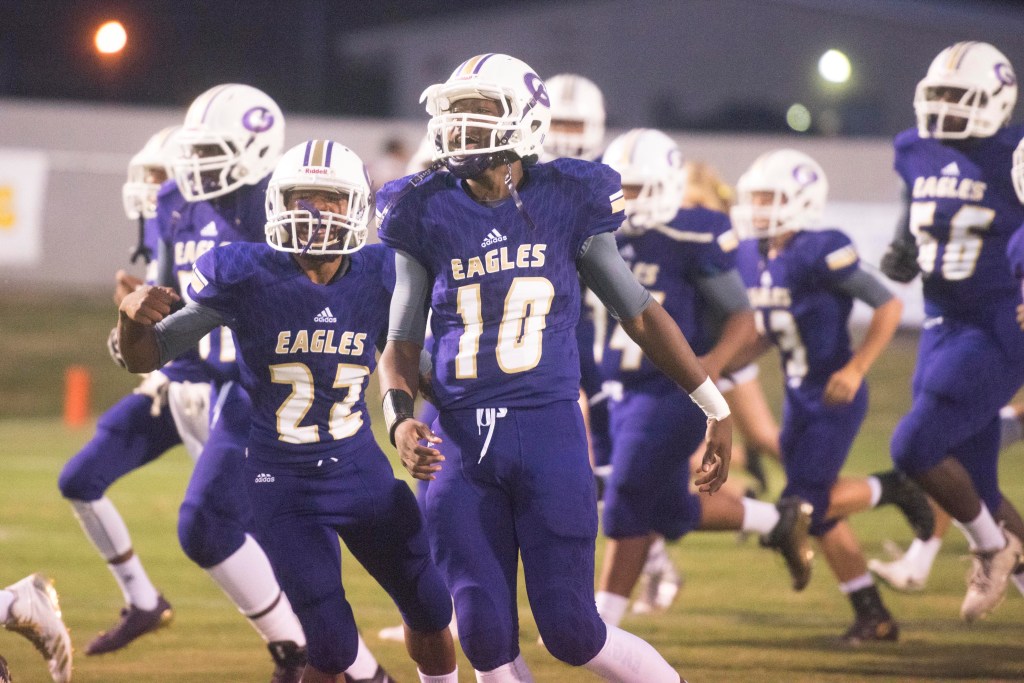 Messenger Photo/jonah enfinger Damion Passmore (22) and JJ Harris celebrate with their teammates during a game against Luverne on September 15, 2017.

The Goshen Eagles hit the practice field on a cool Wednesday afternoon to continue preparations for Friday night’s game against Zion Chapel.

The Eagles (4-1, 2-1) have spent much of the season practicing in the heat, but football weather has returned for the beginning of this week.

“It’s really nice,” said head coach Bart Snyder. “We have a guy with an eye injury and he made a comment about how he hates he can’t go because this is football weather. It’s great. Alabama high schools started a week later this year and I don’t know if it isn’t better. I like it this way.”

The Eagles have used the cooler weather to their benefit this week on the practice field.

“Each week we try to get a little better and work a little bit harder,” Snyder said. “This time of year you have nagging injuries that you think are ‘hurts’ and not ‘injuries.’ You have to learn the difference between them and move on.”

Last week the Eagles went up against the winless Houston Academy Raiders and had to overcome some adversity in their 27-13 win.

“It was 13-3 in the first half,” Snyder said. “We didn’t execute right and we had some penalties that brought some big plays back. It didn’t work well for us, but we settled down and did what we were supposed to do and played Goshen football.”

According to Snyder, Friday’s adversity is a positive thing.

“It’s always good to feel adversity,” Snyder said. “We played some real good teams lately; even with the record that Houston Academy had, they are a good ball team. They were very physical and they were really organized. The difference in the first half of the ball game were the mistakes that we made, but we made them because they caused us to make them.”

This week the Eagles will play a similar foe in Zion Chapel. Like the Raiders, the Rebels come into this week’s game winless under their new head coach Randy Bryant. The Eagles know what type of team to expect out of the Rebels despite their record.

“They are a very organized group of young men,” Snyder said. “They are very disciplined and they are going to do the things they are supposed to do. We have to go in there and play Goshen-style football; if we do that, we will be OK.”

The Rebels have had their best week of practice so far, but Snyder is not surprised.

“They are going to have that,” Snyder said. “They are hungry for a win and what better way to do that than against a team they feel like is a rival. He has them ready and primed for a win.”

With a 2-1 region record, the Eagles are tied for second in the region with three region games left on the schedule.

“We are fixing to have this one and we have a few more,” Snyder said. “We can’t have a letdown in those three games. We don’t want a letdown in any of them, but surely not in the next three.”

The Eagles haven’t fallen to the Rebels since 2013. Kickoff is set for 7 p.m.