Jones making an immediate impact as a freshman 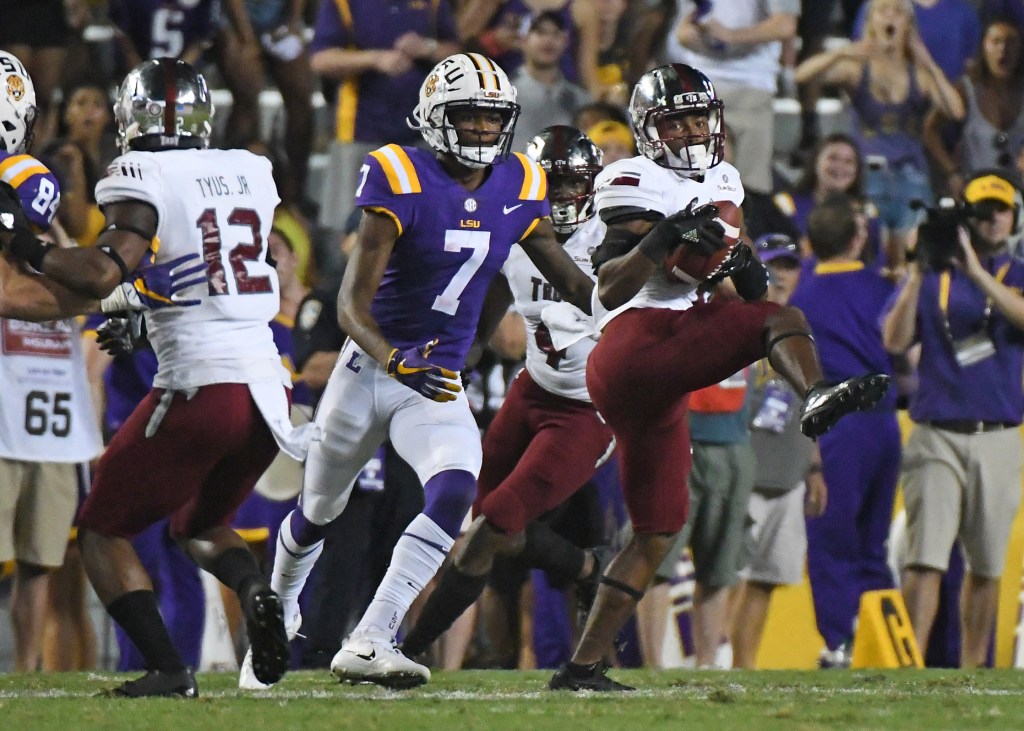 Trojan freshman Marcus Jones has been thrown into fire early in his collegiate career, but so far he is showing he is right where he belongs.

The Wiregrass native graduated from Enterprise High School and in his senior year Jones helped lead the Wildcats to an 11-2 record and a berth in the second round of the Class 7A state playoffs. He was named to the AL.com Super All-State team after he record 27 tackles, five interceptions and three punts and one kickoff for touchdowns.

After joining the Trojans in the fall, the freshman immediately noticed the game at the collegiate level is played a little differently than it was in Enterprise.

“In high school, we were all kids,” Jones said. “Now, you’re playing against grown men. These guys out here are really trying to hurt you and trying to play. It’s faster. It’s just faster and bigger people. You have to get your communication right and be on the same page with everybody on the field. If you go out there and you play hard and you give it all you got, you will be pleased with the outcome.”

In his first five games at the collegiate level Jones has accumulated a 21 total tackles, which is good enough for fourth most on the team. One interception that came during Saturday’s win over LSU and he is also getting it done on special teams by running for 307 yards if you combine kickoff and punt returns.

On Saturday, Jones had the opportunity to hit the road and play in LSU’s “Death Valley” an experience he won’t soon forget.

“It was good. It was great, actually,” Jones said. “The fans were rocking. The stadium was nice. It was my first time being in a big atmosphere.”

https://www.troymessenger.com/2017/10/03/this-wasnt-a-fluke-trojans-shock-the-nation-with-27-24-win-over-no-25-lsu/Along with his one interception, Jones also led the team in tackles with eight.

“Played a great game,” said defensive coordinator Vic Koenning. “Played like he was one of the better players on the field.”

Jones’ interception occurred in the final 1:30 of the third quarter and it ended a six-play drive. It was his first interception as a Trojan.

“All through the week, coach was telling me I had to get out to No. 1,” Jones said.” The first time, I really got out to No. 1, I was doing curl-flat. I saw the quarterback’s eyes. He pumped at first, then he let it go, and I was right there.”

Of the two interceptions in the game, the one that most people will remember will be Blace Brown’s interception to clinch the win for the Trojans. Even though it was Brown that made the play, he stated that it was Jones that told him where the ball was going.

“I knew the play before,” Jones said. “They had three receivers on one side. The inside receiver did an out, and the No. 2 receiver did a corner with No. 1 doing a fade. I knew they’d try to do it again because they got us the first time, and they barely caught it on the sideline. I told him, ‘I’m going to bait the out. You take the corner.’ Right whenever he took the corner and I saw the ball released, I knew Blace had it before I even turned around.”

For Koenning that just proves the intelligence that Jones has for the game of off football.

“At least he listened. That’s a positive, to have somebody that listens and can assimilate what you’re trying to tell him,” Koenning said. “There’s an old saying, I worked with a guy a long time ago that used the term ‘gridlexic.’ There’s a lot of guys nowadays that are fairly gridlexic. They don’t understand football. School aside, there’s usually not a correlation. Some smart guys in the classroom don’t really understand some stuff in football.

Jones is still a freshman and the fact that he understands the game at that high of level gives Koenning more of a reason to be excited about his future.

“I tell you what, it is extremely rare,” Koenning said. “He’s an A player out of high school and we’re very fortunate that he decided to come here.”