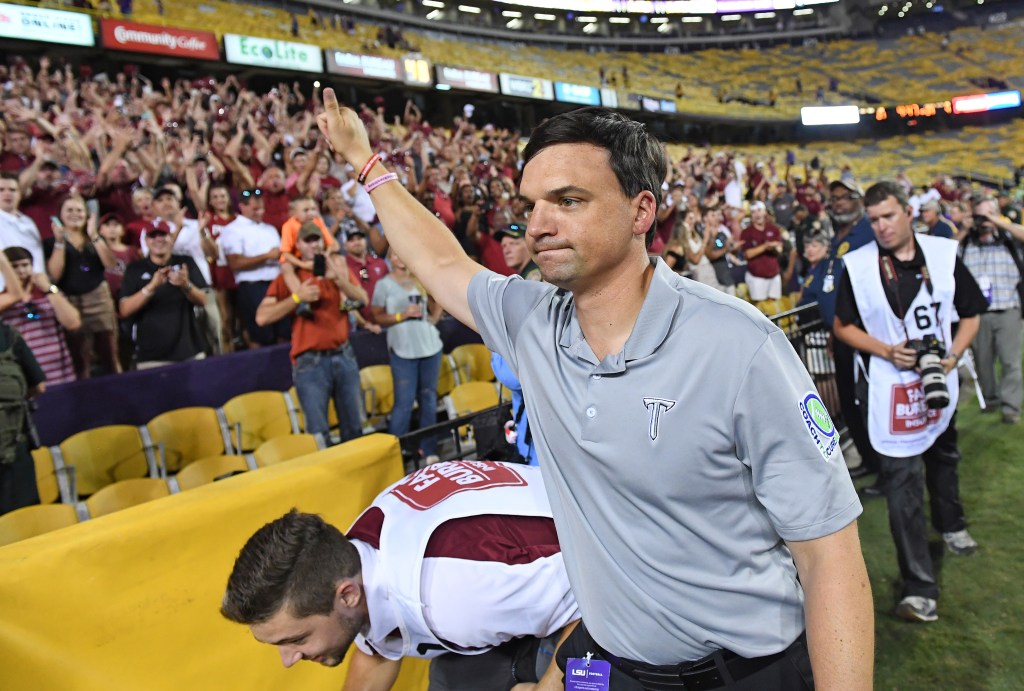 The third time proved to be the charm for the Trojans after falling to LSU in both 2004 and 2008. Troy was finally able to land the finishing blow on Saturday when they knocked off the Tigers 24-21.

“I’m extremely proud of our coaches and support staff,” Brown said. “Winning is hard; I say that a lot. There are so many things that go into making a night like Saturday happen. If you could bottle that feeling you have after a huge win and sell it, we’d all make a lot of money. I’m not sure that there’s a better feeling out there than being in that type of locker room after achieving that type of win.”

The Trojans entered the contest as big underdogs against the Tigers, a team that had previously won 49 straight non-conference home games. When the clock ran out inside Tiger Stadium, the questions immediately began to swirl about what is wrong with LSU and how the Trojans could win this game. For Brown the question is a simple one.

“This wasn’t a fluke,” Brown said. “The national narrative is going to be, ‘What’s wrong with LSU?’ I get that. But this wasn’t a fluke. We didn’t run one trick play; we ran zero gimmicks on offense, defense or special teams. We played “big boy” football. We ran the ball, played great defense and were solid on special teams.”

The next question is where this win stacks up with the all-time great wins in Troy’s history. Troy has previously beaten the likes of Marshall, Missouri and Oklahoma State. Even this win though may not be at the top of the list for coach Brown.

“I’m careful to say this: it’s a significant win, but I don’t believe it’s the biggest win in school history,” Brown said. “We won three national championships here in ’68, ’84 and ’87. I think that would be disrespectful to those team members to say this is the biggest win we’ve had. But it is significant for this university, for this community and for our football program.”

The Trojans have been in the mix against many of the Power 5 elite over the last handful of years. They lost by an eyelash in both 2004 and 2008 against LSU and also had opportunities to knock off Georgia in 2007 before falling 44-34. They lost by seven to  both Tennessee in 2012 and Florida State in 2007.

“We’ve been knocking on the door for a long time,” Brown said. “Since this program went to Division I, we’ve had some significant wins. One main road win was at Mississippi State, but we have had some significant home wins – Missouri here, Oklahoma State here. But we have knocked on the door at really a roll call of who’s who in college football over the last 12-14 years.”

The Tigers were able to pull to within three points by game’s end, but an interception by Blace Brown sealed the win for the Trojans.

Brown hauled in one of two interceptions that the Trojans forced.

“We’ve got good players,” Brown said. “We’ve got a few NFL (caliber) players. We earned that victory and I think that needs to be noted. It was 24-21, but I really feel like we were in control of the game from the first quarter on.”

Many Trojan fans and Brown himself remember what happened in 2008 when the Trojans raced out to a 31-3 lead late in the third quarter. Fans quickly headed for exits before LSU ultimately completed their largest comeback win in school history. On Saturday with the Trojans up 17-0 and the fans again heading to the exits, Brown’s message to the players was “Don’t blink.”

The Trojans were on the grand stage a year ago in Clemson and that experience gave the Trojans a boost against the Tigers.

“Our guys were not surprised that they were ahead in the game,” Brown said. “We played the national champion toe-to-toe in week two at their place last year. Our guys had a ton of confidence coming off that. We weren’t overconfident, by any means, going into LSU.

“They were really confident in their abilities and felt like we were going to go in there and win that football game. So, when we got up 17-0 it wasn’t ‘Oh my gosh, we’re ahead of LSU’ it was ‘Okay, we’ve got to finish the game.’”

Despite the national attention and continuous coverage that the Trojans have gotten over the last 48 hours, Saturday’s win did little to change Troy’s ultimate goal.

“As big as this win was it does not affect our end-of-season goal, which is to be the conference champion,” Brown said. “We start off with a huge rivalry game versus South Alabama. Are we capable of playing better? Yes. This may sound crazy to you all but we’re going to have to play better to beat some of the teams we’re going to play on down the road. Your conference opponents know your tendencies and it’s more difficult.”