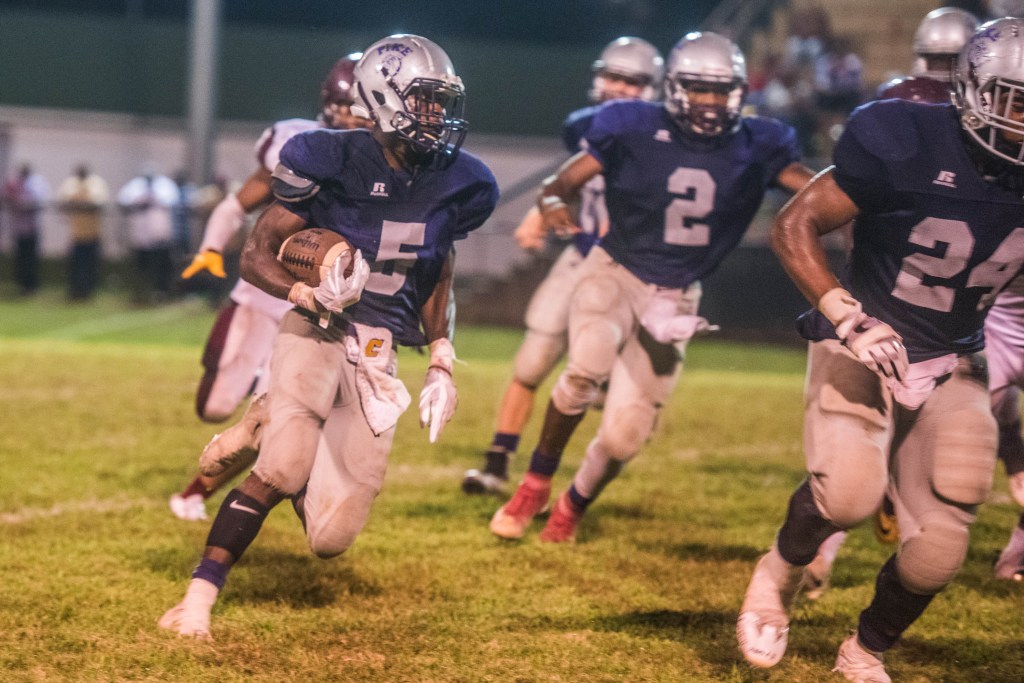 Photo/Jonah Enfinger Jahzarian Lampley (5) runs the ball for the Bulldogs against Abbeville. Lampley and the Bulldogs defeated the Yellow Jackets 33-8 to improve their record on the year to 4-1.

Jahzarian Lampley rushed for three touchdowns in Pike County’s 33-8 win over the Abbeville Yellow Jackets on Friday night in Brundidge.

The win for the Bulldogs improves their overall record on the season to 4-1.

The Bulldogs couldn’t wait to get on the field to play their old friends from Abbeville, but it was well worth the wait.

“It felt really good,” said head coach Fred Holland. “We made a few mistakes early in the first and second quarter. We came back and did a lot better in the third and fourth quarters. I am proud of the kids for doing that. We are trying to steadily get better.”

Lampley along with his three touchdowns rushed for a team high 192 yards.

“He is steadily getting better,” Holland said. “He started off a little slow, but he is improving and he is a leader. He doesn’t speak a lot; his actions speak for him. He is one of our great leaders and we are proud of him right now.”

Minus two first half turnovers, the Bulldogs had their way with the Yellow Jackets in the first half.

After a lengthy opening drive the Bulldogs fumbled the ball on what was the seventh play of the drive, giving the Yellow Jackets possession on their own 27.

The Bulldogs defense made a stand in their first possession After Abbeville went three and out, the Yellow Jackets elected to try a fake punt. The Bulldogs sniffed it out and took over deep into Abbeville territory.

Jahzarian Lampley capped off a five play drive with a six-yard touchdown run to put the Bulldogs up 7-0.

Abbeville looked to answer right away, but they were turned over on downs for the second time in the half. It didn’t take on for the Bulldogs to take advantage. After a 29-yard run by Lampley, Zion Scott scored on a 31-yard run to put the Bulldogs up 14-0,

The Yellow Jackets had the ball in the red zone just once in the first half and it came late in the second quarter. With the ball near the five-yard line, Bulldog defender picked off a Yellow Jacket pass to keep Abbeville out of the end zone sending the game into half time with a 14-0 score.

With a little help by the Bulldogs, the Yellow Jackets went on a 15-play drive to begin the second half. On two separate fourth downs, the Bulldogs roughed a punter and allowed a successful fake punt attempt to extend the drive. Abbeville finished it off with a short dump pass to get on the board. After a successful two-point conversion, Abbeville cut the Bulldogs lead to 14-8 with 3:52 remaining in the third.

It was all Lampley on the corresponding drive. After returning the kick off to the Yellow Jacket 45, Lampley had two runs for 45 yards including a 41-yard touchdown. After a blocked extra point, the Bulldogs extended their lead to 20-8.

“That was very important,” Holland said. “They were playing a safe defense and we were able to do that. That is something we can learn from. I am proud of our guys for coming back in the next series and punching it in. It shows that we are steadily improving.

In the fourth quarter, Lampley scored his third touchdown of the contest from over 40 yards out to put the Bulldogs up 26-8 and Darrick Myhand closed out the scoring with a 11-yard run to bring the score to 33-8.

The Bulldogs will return home next week for their final home game of the season to take on Central Coosa for homecoming.

“We really have to concentrate on Coosa,” Holland said. “I know there are a lot of things that are going on. Homecoming is homecoming and we will be ready for it.”

Kick off between Coosa and Pike County is scheduled for 7 p.m.