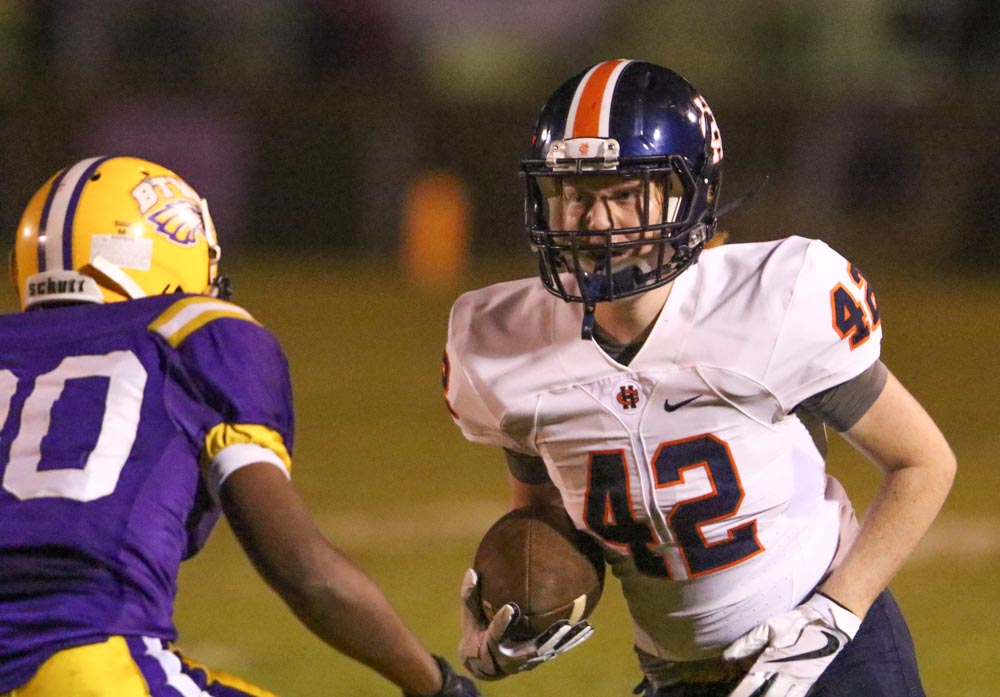 Photo/dan smith CHHS receiver Jackson Giles, 42, picks up a first down on a reception Friday night against Booker T. Washington in Tuskegee

The Charles Henderson Trojans have won two games in a row and now look to extend that streak this evening when they take on Stanhope Elmore for homecoming.

The Trojans (2-2, 2-1) are following a similar path to the 2016 season. After losing the first two games last season against UMS-Wright and Carroll, the Trojans rattled off seven wins in their final eight regular season games. After losing to the same two teams again this season, the Trojans got consecutive wins against Greenville and Booker T. Washington and morale is high.

“I think it’s better,” said head coach Brad McCoy. “I think the guys – I think anytime you are winning ball games, the focus is better and concentration tends to be better. I think they believe in the game plans. I think that has shown this week.”

Last week’s game couldn’t have gone much better for the Trojans. They knocked off region foe Booker T. Washington 42-0 in one of their more complete games of the year.

“We had a really big night,” McCoy said. “We had some big plays in the kicking game that allowed us some good field position. Jared Wilson had a big night rushing the football; another 100-yard rushing night. Noah (Lowery) handled and managed the offense well.”

Wilson had a lot of excitement coming into the season. Wilson has rushed for 464 yards through the season’s first four games including a 163-yard performance in the season opener against UMS-Wright.

“Jared has been really solid,” McCoy said. “I think that is a testimony to the offensive line and how hard they have worked. We have had to move the O-line around a little bit. Jared right now is running with a chip on his shoulder. He is running hard and low and is breaking tackles.”

The Trojans will celebrate homecoming this week, but it won’t be against a pushover. Stanhope Elmore visits as a member of division 6A  and even though they are 1-3, McCoy expects a tough game.

“Stanhope is a really good football team,” McCoy said. “ They are coming off a big win against Northview last week. They are big, physical and they run the ball down hill. They are more or less a power-type football team.”

The Trojans aren’t overlooking Stanhope’s defense either, although the unit has allowed 30 points per game so far this season.

“Big, fast and athletic,” McCoy said. “They run to the ball well and they run side to side. Those linebackers sit really well. They have some cover guys that are hard to separate from. I think they will be coming in with confidence.”

The Trojans knocked off the Mustangs a year ago by the score 21-14.

Kickoff is scheduled for 7 p.m. inside Veterans Memorial Stadium in Troy.