Another test: Silvers gets another chance to impress in front of a national audience against LSU 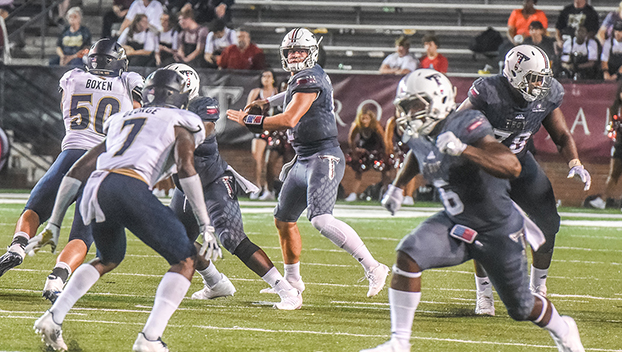 Troy quarterback Brandon Silvers will get a second shot on national television Saturday when the Trojans travel to take on LSU.

The last time the Trojans played on ESPNU, things didn’t go very well for Silvers and the Trojans offense. The offense finished with just 215 yards in a 24-13 loss to open the season. Silvers finished 17-33 for 139 yards with one interception.

“I’m extremely disappointed in how we played, and I don’t think there’s any better way for me to say that,” Brown said after the loss. “We had three turnovers, six penalties and gave up four sacks. We made about two competitive plays in the game where we made somebody miss or we went up and made a competitive catch. I thought we were poorly coached and executed badly.”

Since then, the Trojans have improved by averaging 526 yards per game. Silvers has been at the center of it, throwing for 345, 286 and 314 yards respectively.

With the nation looking on this week, Silvers will get another opportunity to prove there is something behind the hype heading into the season.

“I think against the last upper-level opponent that he played against with Boise, he really played poorly,” Brown said. “I think he’ll look at it that way. But I think it’s more about him just being consistent – week in, week out; consistent in his approach, consistent in how he’s preparing.”

Silvers is looking for a chance to turn the page Saturday against the Tigers.

“Obviously I didn’t play good at Boise,” Silvers said. “Everybody knows that. But just going to a bigger school, this is going to be an even bigger challenge than Boise. Just going in there, I have a lot of confidence in our team and myself.”

Silvers will be going up against another formidable defense, just like the Trojans did in week one. The Tigers are 3-1 with their lone loss coming to Southeastern Conference rival Mississippi State. The Tigers have allowed an average of just 191 passing yards and have forced four interceptions.

“They do some things that are difficult defensively,” Brown said. “They’re going to come down and really challenge our wideouts. So a lot of things that will happen this game are out of his control. All he can do is make good presnap decisions. He’s got to be accurate with the football, without questions. We’ll have to move the pocket around a little bit for him.”

Offensive coordinator Kenny Edenfield believes the Trojans have to play to their strengths against a stingy Tiger defense.

“We’re really going to have to do some things that we’re good at, and we have to change maybe the way we get to that so that it disguises it a little bit,” Edenfield said. “Brandon has to go out there and do what he knows. When he takes his time and reads his keys, he’s usually pretty good with the ball in his hands.”

Silvers has played in big venues befoer and knows what is in store for him and his team Saturday night.

“I’ve been to one Death Valley (Clemson’s home stadium), and I’m ready to go to another Death Valley (LSU’s stadium),” Silvers said. “That’s going to be fun going in there. I’ve been once when I watched the Troy game. My family friends growing up, they’re big LSU fans, so I was always around LSU fans. It’s going to be a fun venue.”