Late-game heroics: Trojans get late touchdown to knock out the Zips 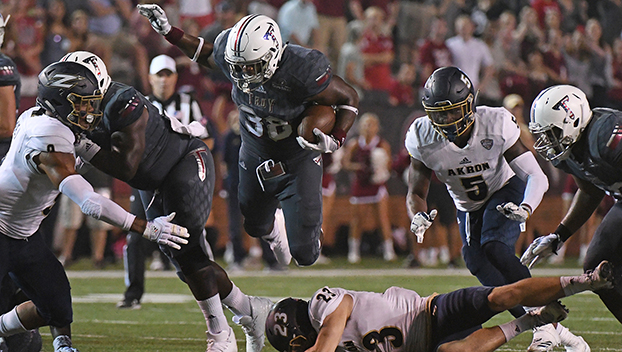 Akron defensive back Nathan Bischof (23) trips up Troy running back Jordan Chunn (38) during the second half. (Photo/Thomas Graning)

It wasn’t pretty, but the Troy Trojans pulled out a late victory over the Akron Zips on Saturday thanks to a 22-yard touchdown catch by Deondre Douglas in the game’s final minute.

The Trojans (3-1) led at halftime 16-3, but thanks to a record-setting 16 penalties and a lackluster offense, the Zips took a one-point lead midway through the fourth quarter.

“I’m proud of our guys for finding a way to win,” said head coach Neal Brown. “So many times, teams that don’t play very well lose the game. I think for us to win the game when we didn’t play well in any phase shows that we’ve got a little something about us.”

Zips head coach Terry Bowden made a return trip to the state of Alabama.

“It was a good win over a well-coached team,” Brown said. “I thought Coach (Terry) Bowden had his team ready to go. They did a really good job defensively after the first quarter. We didn’t play very well, but we found a way to win. We have to coach better, we have to play more disciplined and move forward.”

The Trojans have had a knack of pulling out late wins the last two weeks. After a blowout win over Alabama State, it took a lengthy offensive drive to ice the game against New Mexico State a week ago. This week it took a fourth down completion by quarterback Brandon Silvers to Douglas, to set up their game winning heroics later in the drive.

“I’m not sure that we would have won the game a year ago and we played better football last year than we have at any point this year,” Brown said. “We didn’t finish games real strong last year. We’ve done that now two weeks in a row.”

The defense had a two-week-long turnover drought entering the contest. The Trojans ended that with three on Saturday, including two interceptions by Kris Weatherspoon, one of which sealed the game. Brown was also pleased with his team’s ability to stop the run.

“We went back-to-back weeks without a takeaway and had three against Akron,” Brown said. “They only averaged 2.8 yards per carry and that’s a good running back. We only allowed 17 points and I thought red zone defense was the story of the game.”

The Trojans couldn’t capitalize on the Akron mistakes though.

“We had seven penalties. We did poorly on third down because of a lot of self-inflicted wounds,” Brown said. “We had five drops in the game and zero points off turnovers. We really had an opportunity to blow that game open in the second quarter for the second week in a row, but lacked the killer instinct to put them away.”

Despite forcing three turnovers, the Trojan defense struggled to get off the field, allowing the Zips to convert on 9 of 17 third down attempts.

“I have never been a part of a game like that,” Brown said after the win. “All of them may be guilty; I have no idea. I’m sure we were guilty of our share, but it was just an ugly game.”

The Trojans head to Baton Rouge this Saturday to take on LSU.

“Our team is excited,” Brown said. “We’re going to play in one of the top venues in the country. I’ve had the privilege to play and coach there. It’s an exciting atmosphere and our guys are looking forward to it.”