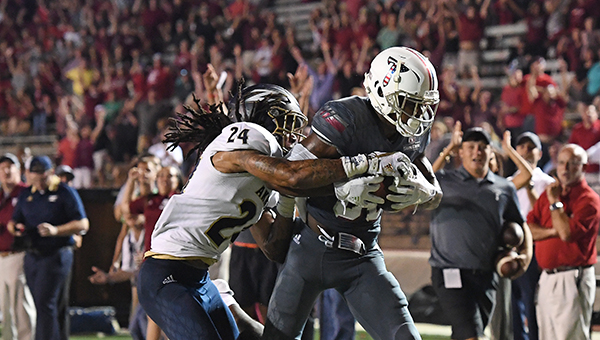 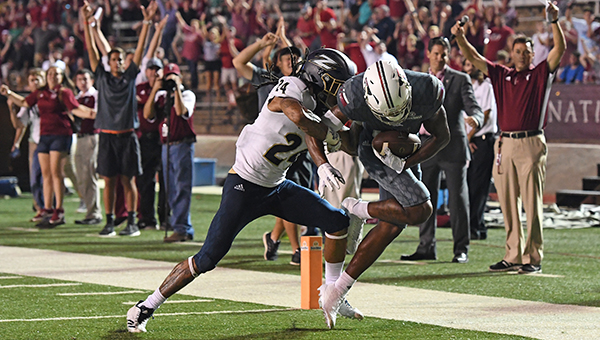 Quarterback Brandon Silvers connected with Deondre Douglas for a 23-yard touchdown pass to give the Trojans a 22-17 win over Akron on Saturday.

The win for the Trojans improves their record on the season to 3-1.

“I was proud of our team for finding a way to win,” said head coach Neal Brown. “I don’t know how to say this, but that was an ugly football game. It was a bad football game, but there are a lot of learning points from here.”

Saturday’s game marked the second week in a row the Trojans had to pull out a win in the fourth quarter.

“We found a way to win games in the end,” Brown said. “That takes character and toughness.”

The Trojans shot themselves in the foot on Saturday. They finished with a team record 15 penalties. Akron added 13 penalties.

“28 penalties in the game for 259 yards,” Brown said. “I have never been a part of a game like that. All of them may be guilty; I have no idea. I’m sure we were guilty of our share, but it was just an ugly game.”

The Trojans led throughout most of the game until midway through the fourth quarter. The Zips went on a nine play, 57-yard drive and took a one-point lead when Warren Ball barreled his way from four yards out.

“In two minutes we go 97 yards for a touchdown,” Brown said. “There was a huge fourth down when Brandon hung in the pocket and made the play to Deondre and Deondre made the touchdown.

“It was great to see some of receivers make plays on that last drive,” Brown said. “We struggled at that position tonight. I don’t think it was our best we had some drops.”

The Trojans capitalized on lengthy drives in the first half and took a 16-3 lead into the locker room at half time.

After fumbling the ball away on their opening position, Troy fell behind early when Akron kicker Tom O’Leary converted on a 28-yard field goal to give the Zips a 3-0 lead.

From there the Trojans scored 16 unanswered points.

Jordan Chunn capped off a 13-play 83-yard drive with a six-yard touchdown run to put Troy up 7-3. It was his 42-rushing touchdown of his career, which is tied for second in Sun Belt Conference history.

The Trojans held the Zips to back-to-back three and outs in their next two drives. Meanwhile Troy extended their lead with a 22-yard field goal by Bratcher Underwood to extend Troy’s lead to 10-3.

The Trojans scored their final points of the half when backup quarterback Caleb Barker streaked down the field for a 48-yard touchdown to give the Trojans a 16-3 after a missed extra point attempt.

The Zips had a chance to cut into the Trojan lead, but O’Leary missed a 34-yard field goal as time expired.

The Zips drew to within six points midway through the third quarter on a 29-yard touchdown pass from Pat Thomas.