Defensive stand: Bulldogs get back on track with win over Panthers 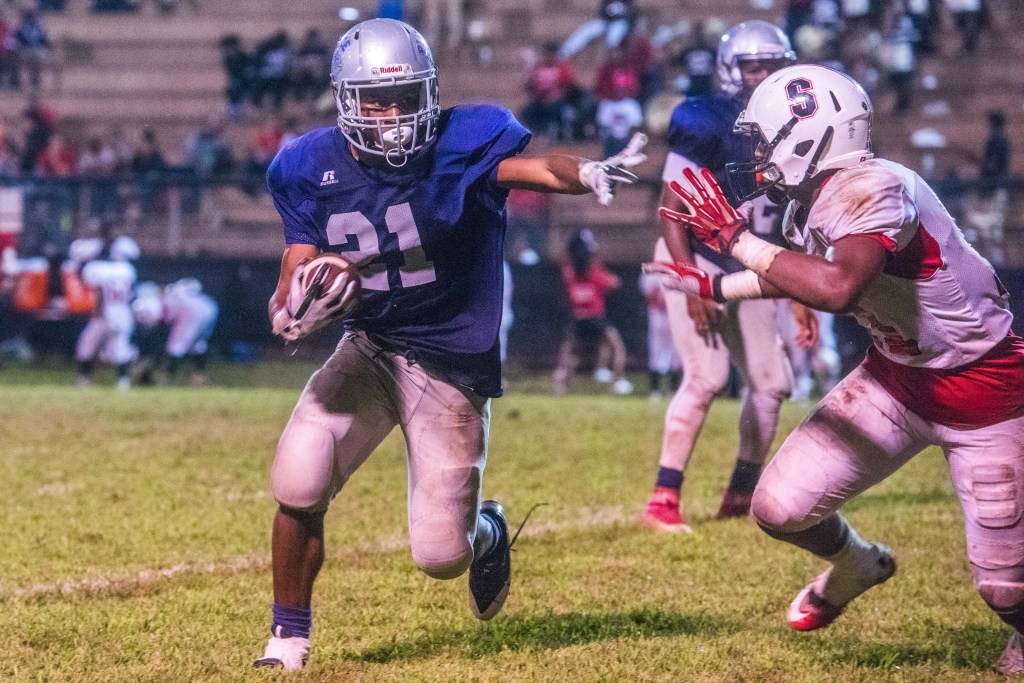 Pike County running back Darrick Myhand runs the ball for the Bulldogs on Friday night against Southside Selma. Myhand and the Bulldogs beat the Panthers 28-16.

The Pike County Bulldogs got back in the win column Friday night when they defeated Southside Selma 28-16 at Bulldogs Stadium.

The win for the Bulldogs improves their record on the season to 3-1 overall and 2-1 in region play.

After falling last week to Montgomery Academy, head coach Fred Holland was eager to see his team respond tonight. He got his wish.

“We did enough things to win and that’s all we can ask,” Holland said. “We’re trying to stay on the victorious side and we accomplished everything that we had to. We made some mistakes, but overall, we did what we were asked to do.”

The Bulldogs found success running the football against the Panthers. The Bulldogs had two players rush for over 50 yards for the nigh. Jahzarian Lampley finished the game with 95 yards on 13 carries and a touchdown while Rayshawn Reynolds contributed another two rushing touchdowns for the team.

“We worked very hard on that,” Holland said. “Our offensive coordinator, coach Waters, does a good job working with the guys and putting something in there that works.”

The Bulldogs looked to run away early on Friday night. The Bulldogs defense forced a turnover on the opening drive when Rayshawn Reynolds picked off a G’Neil Johnson pass.

After taking over on their own 36-yard-line, the Bulldogs embarked on a 12-play drive that saw Jahzarian Lampley touch the ball eight times including a 14-yard touchdown run to put the Bulldogs up 7-0 with 4:37 remaining in the first quarter.

The Trojan defense forced two turnovers in the first half. They also blocked a punt on the Panthers next possession. Lampley blocked the punt, giving the Bulldogs possession on the Panther 7. Reynolds took the opening handoff seven yards for another Bulldogs touchdown.

After a missed extra point, the Bulldogs extended their lead to 13-0.

The Panthers did not go away quietly in the first half. On their following possession, they went on an 11-play drive of their own. On a fourth-and-goal from the 26, Johnson completed a desperation pass in the corner of the end zone to Keshawn Arrington to put the Panthers on the board at 13-7.

A scary moment happened on the next drive when Bulldogs starting quarterback Jaidyn Wilson injured his knee on a quarterback keeper, forcing him out of the lineup for the remainder of the game.

Lampley took over for the rest of the drive and led the Bulldogs to the 5-yard-line before they had back-to-back snaps fly over Lampley’s head, moving the ball back all the way to the 43-yard line. The Bulldogs were unable to score, keeping the score at 13-7 heading into half time.

With Kevon Harris at the helm at quarterback to start the second half, the Bulldogs looked to extend their lead.

Reynolds combined to rush for 34 yards on the Bulldogs first drive of the half, including a 14-yard touchdown run. After a successful two-point conversion, the Bulldogs extended their lead to 21-7 with 10:39 left in the third.

The Bulldogs defense made another statement on the following drive. The Bulldogs held the Panthers on a fourth-down attempt. After taking over on their own 47, the Bulldogs marched down the field and on the fifth play, Darrick Myhand took a Harris hand off 19-yards for another Bulldogs touchdown and Pike County extended their lead out to 28-7 midway through the third.

Reynolds picked up his second interception and the Bulldogs had the ball deep in Panther territory looking to add on to the score. It was the Panthers defense that stepped up on this drive when La’Darius intercepted a Harris pass in the end zone.

Unfortunately for the Panthers, Lampley picked off a pass for the Bulldogs’ third interception of the game.

With time dwindling away, the Panthers scored their second touchdown of the night when Rickey Webster hauled in a touchdown pass.

Johnson finished the evening completing 11 passes for 22 passes for 129 yards and two touchdowns.

The Bulldogs will be back in action next week when they host Abbeville. The Panthers will host Keith.