Troy defense having success despite not forcing turnovers 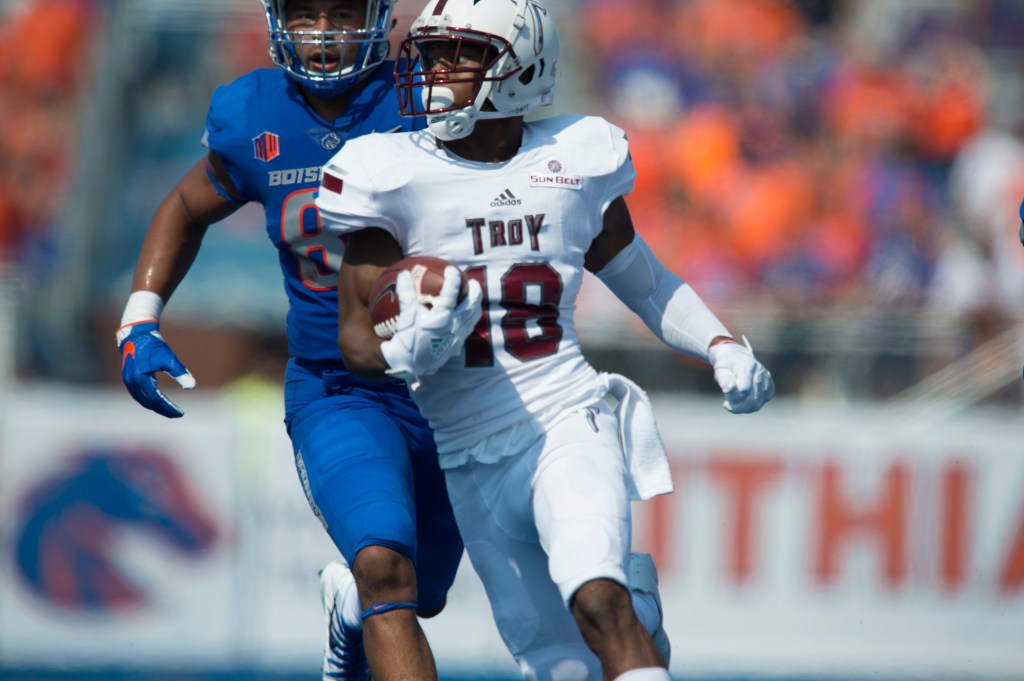 Submitted Photo Blace Brown returned an interception for a Trojan touchdown in the season opener against Boise State. It was the only turnover forced by the Trojan defense in the season’s first three weeks.

The Troy Trojan defense is looking to end a two-week turnover drought this Saturday afternoon when they take on the visiting Akron Zips at Veterans Memorial Stadium.

The Trojans led the Sun Belt Conference in interceptions a year ago with 22, two more than Appalachian State’s 20. Along with their eight forced fumbles, the Trojans finished the season with a turnover margin of positive 10, just one behind Idaho for the conference lead.

The Trojan defense forced at least one turnover in all but one of their games last season. This season, the Trojans have forced just one turnover– an interception by Blace Brown in the season opener.

Against the Aggies, the Trojans held New Mexico State to 382 yards but finished without a turnover.

“Negatively, we had zero takeaways,” said head coach Neal Brown. “That’s something that we pride ourselves on and we probably work on more than your average college football team. That’s the second week in a row.”

Even though the Trojans failed to force a turnover on Saturday, they came up with the stop of the contest late in the fourth quarter. With Troy winning by three, the defense held the Aggies to a three-and-out, giving the ball back to the Trojan offense.

“That was really timely, you might say,” said defensive coordinator Vic Koenning. “Our offense bailed us out on that long drive and ran out the clock. We’re their biggest fans now, I promise you that.”

“I think they’re doing a good job,” Koenning said. “We – knock on wood – have been better this year at defending fade balls to this point. I know teams are going to keep trying that because of last year. We’ll just keep trying to get better. We’ve got some young guys that can really run. They’re helping us to keep other guys fresh.”

Weatherspoon made his return against the Aggies after an ankle injury in the spring and helped to fill space on the defensive side of the ball. Weatherspoon finished the game with eight tackles, tied for a team high.

“He did OK for not having any practice reps in spring ball,” Koenning said. “He technically did a little bit last week. It was an emergency-type situation. The Good Lord took care of us and got him healthy just in time for us to be able to do it with our linebacker injury situation.

“With the team we were playing, we needed to have a guy with some athleticism. I think it really helped us, especially him playing over to the boundary with that back getting out all the time over there.”

Weatherspoon did enough to impress his head coach. If it had not been for one missed opportunity, Weatherspoon may have been the player of the game on defense.

“He played really well,” Brown said. “If he would have caught that interception – he had an interception thrown right to him and it bounced off his chest. If he catches that interception, he’s probably our defensive player of the week. We played him down where he could cover and match up on their back, Larry Rose. He came in and did a really nice job.”

The Trojans will return home on Saturday evening to take on the Akron Zips beginning at 7 p.m.