Gaining steam: Trojan offense once again living up to their potential after poor start 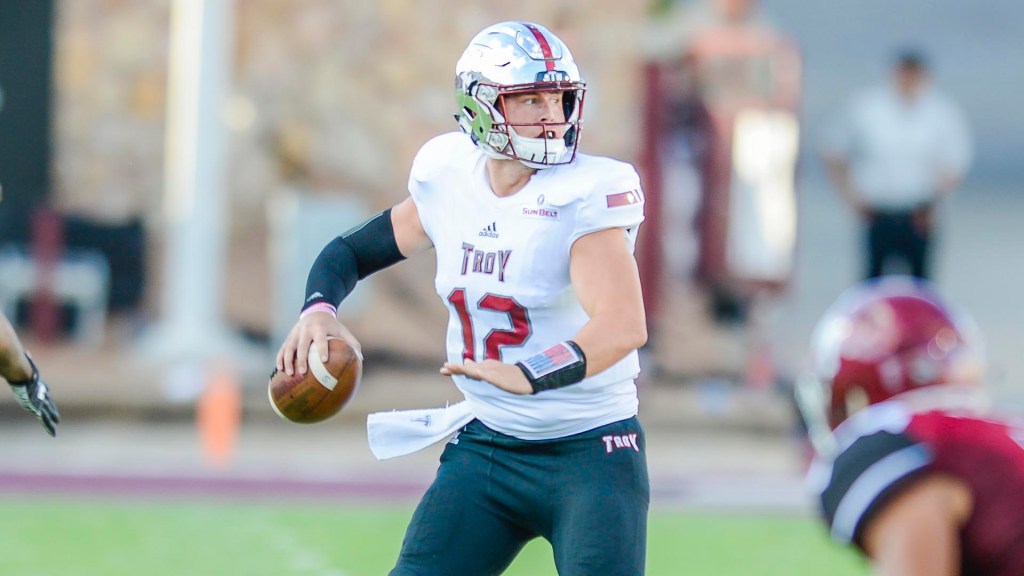 Troy quarterback Brandon Silvers gets set to throw a pass against New Mexico State last Saturday evening. After a poor start to the season, Silvers and the Trojans have won their last two games.

After a poor outing in week one, quarterback Brandon Silvers and the Trojan offense are once again reminding everyone of their strong potential.

The start couldn’t have gone much worse for the senior quarterback in week one’s 24-13 loss to the Broncos. He finished the game with 139 yards passing and an interception and he was sacked four times. The offense finished with 215 yards, their lowest output in Neal Brown’s tenure.

The Trojans have followed it up with strong performances against Alabama State and New Mexico State, picking up 611 yards and 476 yards while improving to 2-1 on the season.

Silvers has been at the center of the Trojans improvement over the last two weeks. Silvers threw for a total of 631 yards with one touchdown. Against the Aggies Silvers completed 25 of his 40 passes after completing 32 passes against the Hornets. For his efforts against the Aggies, Silvers was named the Sun Belt Conference Offensive Player of the Week.

“That’s what we expect from him,” Brown said. “He had a couple of nice runs, as well. I don’t know if we’ll see a 30-yard run every game. I thought he made good decisions pre-snap. I thought he managed the game well. I think the week one Brandon Silvers that you saw at Boise isn’t who he is. I think he put a lot of pressure on himself for whatever reason and didn’t perform very well.”

The help around Silvers has stepped up as well. The Trojans got a big contribution from receivers Deondre Douglas and Damion Willis. Douglas led the way for the Trojans over the Aggies by hauling in seven passes for 101 yards. Willis, new to the Trojans, led the Trojans over the Hornets by picking up seven catches for 93 yards.

“I can say from Week 1 to Week 2 to Week 3, I’d say we’ve progressed slowly,” Willis said. “We weren’t clicking on all cylinders that first game. The second game, we improved. The third game, we did pretty good. The passing game has improved a lot and also the running game.”

Willis joined the Trojans during fall camp and has made an impact. He was excited to be able to play with Silvers.

“When I heard about Brandon, that I was going to be one of his receivers and he was going to be my quarterback, I felt good because they had already said that he was projected to go in the NFL,” Willis said. “I said, ‘An NFL quarterback? Anybody would love to play with him.’”

Willis had finished 2016 with six touchdowns, good enough for a tie for second in the Sun Belt Conference. He finished third in total yards with 740 yards.

In the first two games, Douglas combined to catch just five passes for 41 yards before breaking out against the Aggies.

“It started with trust in God and my faith,” Douglas said. “Before the game, I was praying; all week I was praying and I focused in. The last two weeks prior I wasn’t as focused in as I should be. This week I was and it was a ball game.”

Offensive coordinator Kenny Edenfield believes Silvers production will be determined by his playmakers beside him.

“To be honest with you, we really haven’t played great around him,” Edenfield said. “Some of the skill positions, I think we can play better, especially inside receiver and outside. We know we can. We have really high expectations for all those guys. I think, when we really get to rolling, it’s going to help his numbers even more.”

Silvers believes in the potential of the offense moving forward.

“One of these games we are just going to bust out for 50-plus points, I believe in that,” Silvers said. “Hopefully it’s this week. If it’s not, hopefully we put up enough points on the board to win.”