Fast start: Trojans jump out to 1-0 in conference play after win over New Mexico State 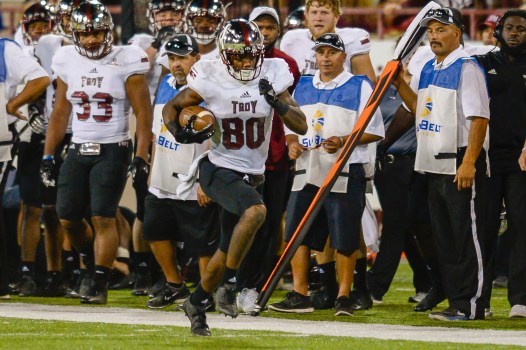 Deondre Douglas runs down the sidelines during Troy’s win over New Mexico State on Saturday. 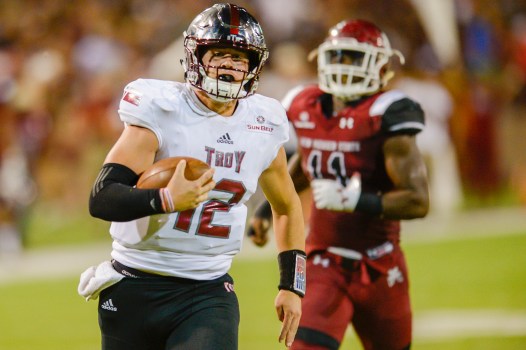 Troy quarterback Brandon Silvers ran for a 32-yard touchdown against the Aggies.

The Troy Trojans knocked off New Mexico State 27-24 in the Sun Belt Conference opener on Saturday evening in Las Cruces.

The win for the Trojans gives them their second straight win in a conference opener and they improve their record on the season to 2-1.

“1-0 in the Sun Belt,” said head coach Neal Brown. “That was our goal all week. I thought we had a good week of preparation last week. Our kids prepared with purpose and understood the task at hand.”

The Trojans have had to endure their fair share of travel over their first three weeks of the young season. After traveling to Boise, Idaho in week one, the Trojans made another long trip to Las Cruces.

“It is really difficult to get from Troy, Alabama to Las Cruces, New Mexico,” Brown said. “I don’t think the average fan understands what goes into making that trip. We have made two cross-country trips in the first three weeks. I am really proud of our guys for handling that trip and coming out with a win.”

Brandon Silvers was the star of the game for the Trojans on his way to earning the Sun Belt Conference Offensive Player of the Week Award. Silvers threw for 286 yards and a touchdown and he also ran for a big 32-yard touchdown on a fourth-and-one late in the game.

“That’s what we expect from him,” Brown said. “He had a couple of nice runs, as well. I don’t know if we’ll see a 30-yard run every game. I thought he made good decisions pre-snap. I thought he managed the game well.”

The 32-yard dash was Silver’s second lengthy run of his career. He ran one in from over 50 yards against Appalachian State last year.

For Silvers, it’s all about keeping your knees up.

The offense finished the game with 476 yards on the night.

Despite having a lot of positives, there were also negatives that won’t be ignored.

“I think we had nine offensive penalties, which is absolutely ridiculous,” Brown said. “We were 1-of-3 on fourth down, which is not where we need to be. Probably the most frustrating thing offensively is when we went into the half 13-3 and we haven’t punted the whole half. Positives were that we had zero turnovers. We were really efficient on third downs. We started both halves fast, scoring touchdowns on both the opening drives of each half.”

The biggest test came on the defensive side of the ball for the Trojans. The Aggies offense is one of the more formidable units in the conference and the Trojans held them below their average in points and yards.

“New Mexico State is one of the top offenses, if not the top offense, in our league,” Brown said. “The positives were that we stopped the run and took them out of the run game. I think they only had 17 rushing attempts for right at three yards per carry. We limited their big plays and kept them in front of us.”

Brown would like to see his defense force more turnovers and be able get off the field on third down.

“We had zero takeaways,” Brown said. “That’s something that we pride ourselves on and we probably work on more than your average college football team. That’s the second week in a row. They were 4-of-8 on third downs of 7+ yards. We have to do a better job of getting off the field.”

The Trojans will step out of conference play this weekend when they return home to take on the Akron Zips out of the Mid American Conference under head coach Terry Bowden.

“This week, our team is really excited about not getting on a plane,” Brown said. “We’re excited about staying home and getting back in front of our home crowd. We’re expecting another huge crowd here. We’ve got really two groups of people that we’re celebrating this week.”