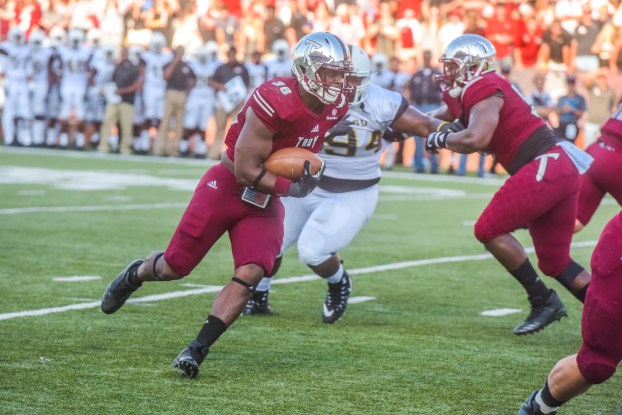 The Troy Trojans hit the road this Saturday to take on New Mexico State.

Troy takes on the Aggies in conference opener

The Troy Trojans face their second long road trip of the season on Saturday when they head to Las Cruces New Mexico to take on the New Mexico State Aggies in the Sun Belt Conference opener.

The Trojans responded to their season opening loss to Boise State by earning a comfortable win over Alabama State last Saturday in front of a record setting crowd at Veterans Memorial Stadium.

“Going back to Saturday night, seems like a long time ago now, I’m proud of how our guys responded,” said head coach Neal Brown. “What a great atmosphere for college football right here in Troy, Alabama, at The Vet.

The win improved Troy’s record on the season to 1-1.

“The win got us to 1-1,” Brown said. “We always celebrate winning here. I think the minute you take winning for granted, it stops happening some. Winning is hard to do.”

This week marks the beginning of the Sun Belt Conference schedule for the Trojans and the Aggies. Like the Trojans, New Mexico State comes into Saturday’s opener with a 1-1 record after they the fell to Arizona State in week one before defeating instate rival New Mexico last Saturday.

“I really felt like this at media days, I thought they’d be the most improved team in our conference,” Brown said. “They’ve proved that correctly through the first two games.”

Aggie head coach Doug Martin is in his fifth season at the helm and along with defensive coordinator Frank Spaziani, New Mexico State is much improved this season.

“It starts with coaching,” Brown said. “If you look at what Doug Martin has done as an offensive football coach throughout his career, it’s been impressive. And defensively they’ve made huge strides under Frank Spaziani there. I knew he’d make them better on defense, it was just a matter of time, and through two games they’ve shown that.”

Spaziani’s defense allowed 400 yards of total offense to the Sun Devils in the opener before allowing 430 more yard against New Mexico.

“They get incredible pressure on defense. I think they had seven sacks against Arizona State, a PAC 12 team, and lose by six points. Then they go on the road to New Mexico, who has one of the best rushing attacks in the country, and basically shut them down for three quarters.”

Troy quarterback Brandon Silvers has had success going up against the Aggie defense. In his three prior meetings Silvers has thrown for a total of 275 yards and eight touchdowns.

In those three wins the Trojans have outscored the Aggies 145-37.

Even though the scores have been lopsided, the Aggies have been able to rack up yards. Last season quarterback Taylor Rogers threw for 445 yards, but also threw five interceptions.

“We’ve really struggled stopping them the last two years,” Brown said. “Tyler Rogers, the quarterback, is very similar to Brandon; he gets the ball out of his hand fast. I think he threw for 445 yards here. We were able to come out with the win because he threw some interceptions in the red zone.”

This season the Aggies are averaging over 520 yards per game during their 1-1 start.

“They have one of the top receiving corps in our conference and have two running backs led by Larry Rose, who is special,” Brown said.

The Trojans will make their second lengthy road trip in the season’s first three weeks after flying to Boise, Idaho in week one.

“If we’re going to make two (long) trips, I’d rather do it early,” Brown said. “It’s hard to do two (long) trips in three weeks. We’re going to do a better job at getting our players ready to play in a road atmosphere. We didn’t perform very well the last time we went on the road and got on a plane.”

Kickoff between the Trojans and Aggies is scheduled for 7 p.m. and can be see on ESPN3.

“It’s conference time,” Brown said. “Our goal when we get back on the plane is to be 1-0 in our conference.”

Unfinished business: Trojans open up conference play against the Aggies

The Trojans accomplished everything but winning a conference championship last season. They will take their first step towards that goal... read more