Bulldogs fall in region game for first time since 2015 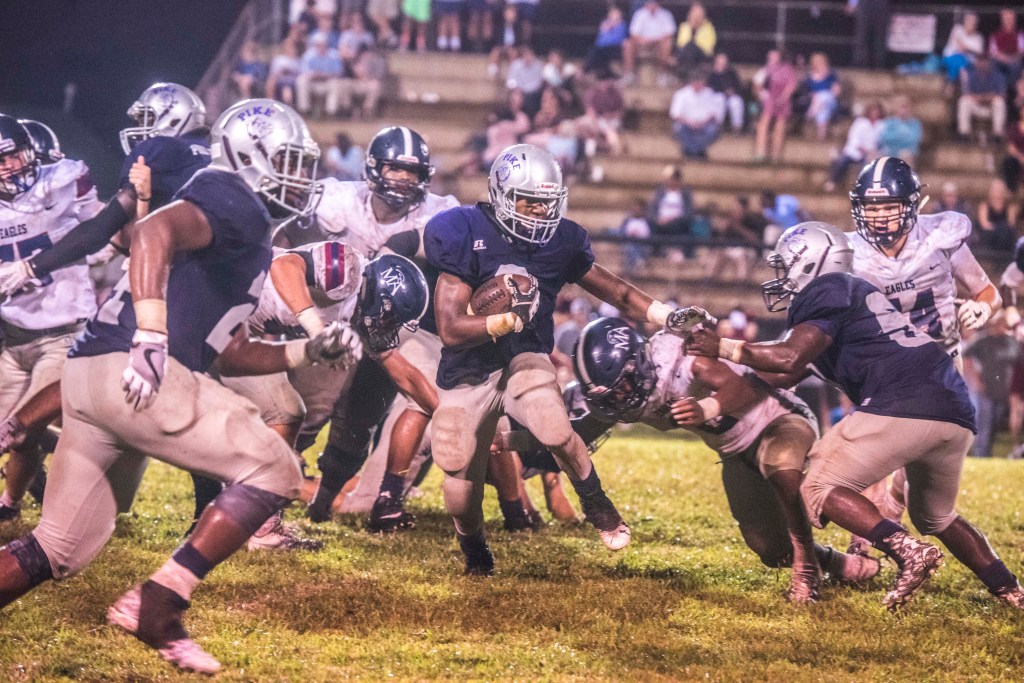 Messenger Photo/Jonah enfinger The Pike Patriots fell to the Montgomery Academy Eagles 31-7 on Friday night. It’s the Bulldogs first region loss since the 2015 season against then region foe Daleville.

The Pike County Bulldogs struggled to mount anything offensively and fell to Montgomery academy 31-7 on Friday night in Brundidge.

The loss for the Bulldogs drops them to 2-1 overall and 1-1 in region play. The region loss is the Bulldogs first since 2015 and it was only their second home loss since the beginning of the 2015 season.

“We just got our tails whipped,” said head coach Fred Holland. “We got outplayed. Special teams, offense and defense. We have to go back to the drawing board.”

The Bulldog defense struggled against the big play capabilities of the Eagles.

“We had some miscues and gave up some big pass plays which kind of knocked the air out of us,” Holland said. “We just got out played. Simple as that.”

The Bulldogs offense struggled most of the night before finally getting on the board late in the fourth quarter.

“We just failed to execute,” Holland said. “It was poor execution. We have a lot of work to do; hopefully we can improve.”

Both offenses struggled to get anything going in the first half. Both teams combined to gain 172 yards over the first two quarters on Friday night.

The Eagles outgained the Bulldogs 91-81 and they also had the advantage on the scoreboard heading into halftime.

After both teams came up empty in their first two possessions, the Eagles scored the game’s first points late in the first quarter. After getting the ball on their own 47-yard line, the Eagles marched 53 yards on five plays to put them up 7-0.

The Bulldogs had their best drive of the half in the final minuets of the second quarter. Pike County got the ball on their own 42-yard line with 3:16 remaining. The Bulldogs held the ball for 11 plays and made it deep into Eagles territory before running out of time. Pike County went into the half tailing 7-0.

After another stalled Bulldogs drive to begin the second half, the Eagles extended their lead to double digits when they closed out an eight play drive with a 20-yard field goal to give them a 10-0 lead with 5:49 remaining in the third quarter.

Just over a minute later, Bulldogs quarterback Jaidyn Wilson threw an interception giving the Eagles the ball at the Pike County 26 yard line. On the first play they connected on a 26-yard touchdown pass and catch to extend their lead out to 17-0 with 4:35 remaining in the third.

The Eagles extended their lead to 31-0 after they scored on a 21-yard run followed by a 55-yard fumble return for a touchdown.

The Bulldogs finally got on the board when Rayshawn Reynolds broke through the defensive line and scored from 64 yards out to bring the score to 31-7.

The Bulldogs will be back home next Friday night when they host Southside Selma.

“We have a lot of work we have do offensively, defensively and on special teams,” Holland said. “Hopefully we can solve some of these problems.

Kick off is scheduled for 7 p.m.