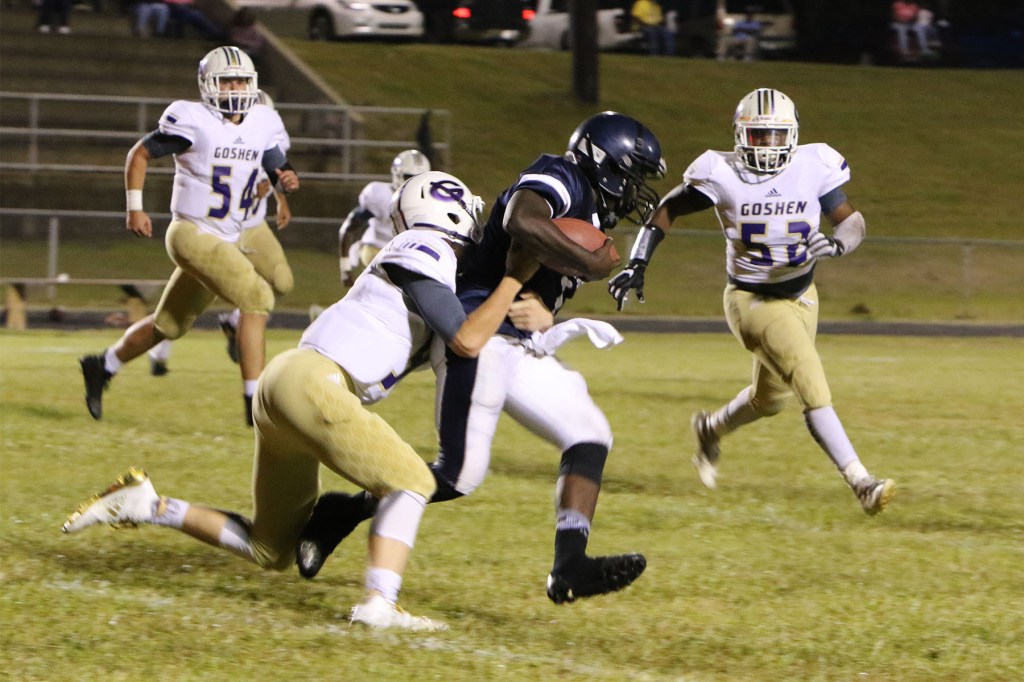 Submitted Photo The Goshen Eagles take on rival Luverne on Friday night in the 2017 home opener.

Fresh off their blowout win over Carroll in the region opener last Friday night, the Goshen Eagles are set to take on rival Luverne in their home opener at Eagles Stadium.

The Eagles have had to juggle their schedule around Tropical Storm Irma this week, but they returned to the field on Tuesday ready to prepare for the Tigers.

“We were very blessed with the fact that there was no damage other than small limbs,” said head coach Bart Snyder. “Tuesday we had a really good day. Today has been a little sluggish, but it will get better. A little running will take care of that.”

The Eagles began region play a week ago in grand fashion after they defeated the Tigers 51-0. The Eagles held the Tigers to -13 yards offensively while picking up 191 yards themselves.
“We were just a little bit better than them this time,” Snyder said. “I think they will get better. Coach (Ervin) Starr got there late, so he has had to work with the time frame that he has had.”

With the lopsided win, coach Snyder was able to get many of his players some much-needed playing time.

“We got to play a lot of people that don’t normally get in the game,” Snyder said. “We got some running backs and receivers some touches. It’s just great to be able to do that.”

This week, the Eagles go up a step in competition when they welcome in rival Luverne. Only 15 miles separate the two teams and familiarity between the players only sparks the rivalry.

“Our guys know their guys and their guys know our guys,” Snyder said. “They have a lot of talk going on. It’s a good little rivalry. The kids know each other and go out with each other and do things during the weekend. It’s good to get on the field and then they can have some talk throughout the year.”

The Tigers come into the game with a 1-1 record. Goshen will be their first region  opponent of the season. The Tigers beat Highland Home 58-26 in the season opener before falling to St Lukes 57-12 last week.

The Eagles have won two out of the last three games against the Tigers including a 29-13 win last season.

“When you come out, you have to be ready and focused on the task at hand,” Snyder said.

Kickoff for the Eagles home opener is scheduled for 7 p.m.