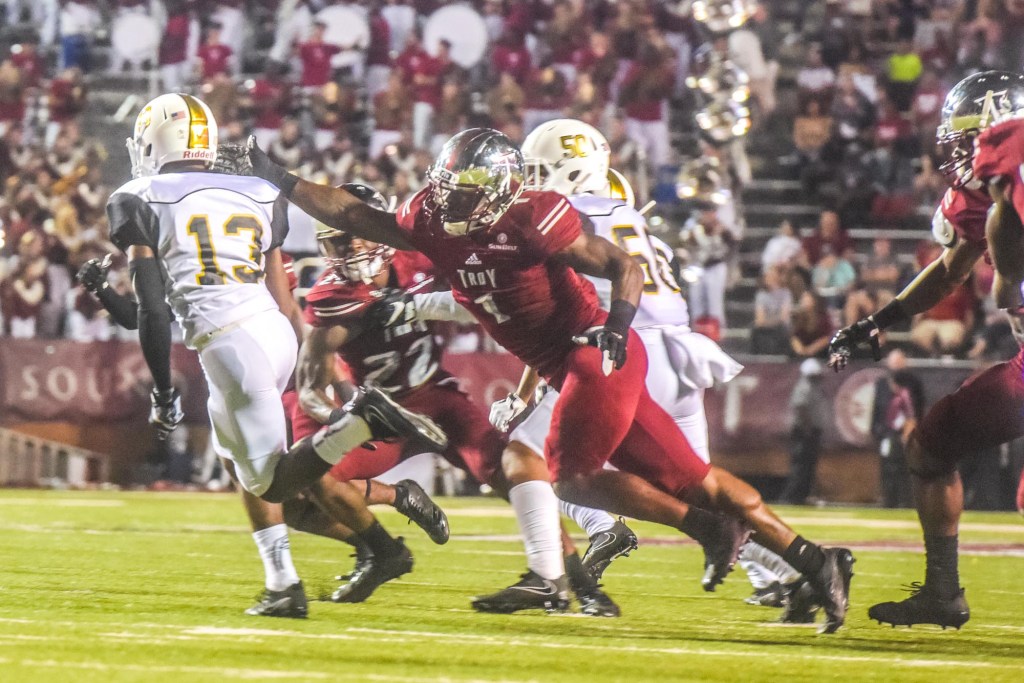 The Troy Trojan defense held the Alabama State Hornets to just 165 yards of total offense during their 34-7 win on Saturday evening at Veterans Memorial Stadium. The Trojans will be back in action this Saturday when they travel to take on New Mexico State beginning at 7 p.m.

The Troy Trojans had a complete game performance in Saturday’s win over Alabama State. The offense got back on track and the defense carried over their strong performance against Boise State.

After allowing 357 yards and 24 points to Boise State in week one the Trojans backed it up with a strong effort against the Hornets on Saturday by not allowing an offensive touchdown on just 165 yards of total offense.

“We continued to play with a lot of passion and energy,” said Troy head coach Neal Brown. “We shut them down defensively. The only score they had was a pick six. Defensively we are continuing to grow.”

Just like they did in week one the Trojans played a lot of people on Saturday, many of which are getting their first taste of Division-I football.

“We are going to continue to play a lot of people which is going to pay dividends down the road,” Brown said.

The Trojans entered the season with heightened expectations mainly due to the fact that much of offense was returning from a year ago. The defense didn’t have that same luxury. Troy had to replace many of their players at linebacker and their depth took a hit. Even with the turnover, the defense is staying productive over the first two weeks. For defensive end Seth Calloway strong leadership is the cause.

“(It’s)Leadership by our coaches and from guys like Sam (Lebbie), from me and from Jamal (Stadum). Older guys that have played a lot,” Calloway said. “We lost a lot of older guys but we have a lot of guys with experience. Even most of the younger guys have still played a lot of ball.”

The new players got thrown into the fire from the first day of fall camp.

“They came in fall camp and we threw them straight into the fire,” Calloway said. “There wasn’t an ease in process, it was like here you go you’re going to play. With them disciplining us and us keeping guys accountable it has been really working good.”

The Trojans will have a stiff challenge this week when they travel to Las Cruces New Mexico to take on the New Mexico State Aggies. New Mexico started the season 1-1 after falling to Arizona State and beating New Mexico. In their two games they are averaging 30 points per game. Last season the Aggies finished third in the conference when they averaged 414 yards per game.

“We have a huge challenge in front of us next week because New Mexico State is one of if not the best offenses in our league.”

Kickoff between the Trojans and Aggies is scheduled for 7 p.m.