Back on track: Trojan offense accumulates 605 yards in win over Alabama State 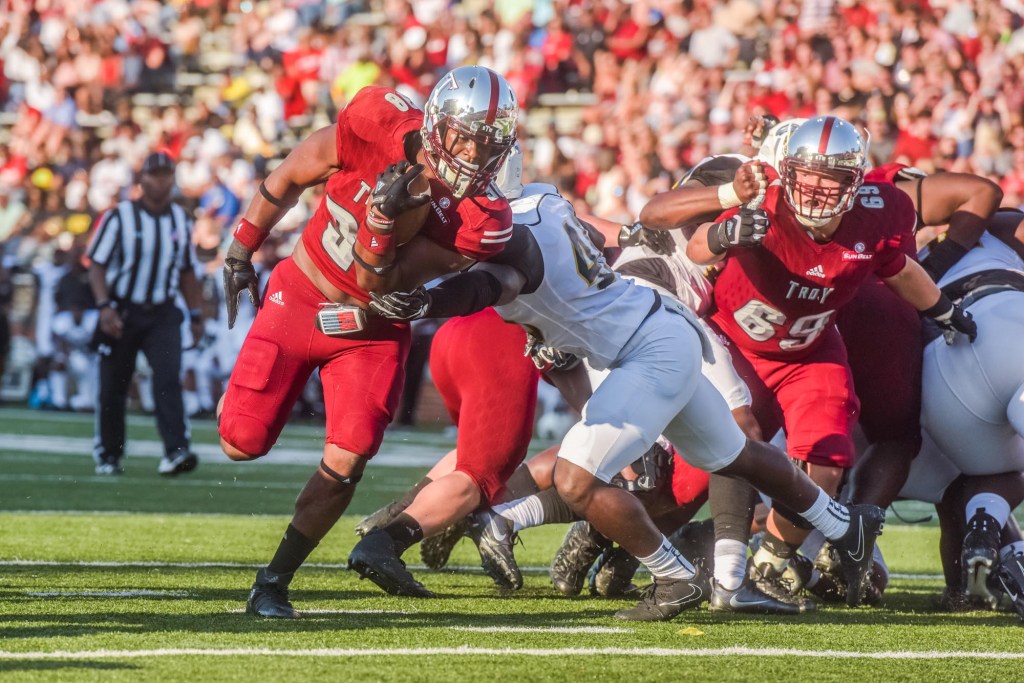 After picking up 215 yards in their loss to Boise State in the season opener, The Troy Trojans got their offense back on track Saturday when they picked up 605 yards in their 34-7 win over Alabama State. Above: Jordan Chunn runs the ball for Troy.

The Trojan offense took a step in the right direction on Saturday when they knocked off Alabama State 34-7 in front of a record-setting crowd of 29,278.

“Tonight was a win. It wasn’t always pretty,” Brown said. “I thought we dominated the game in all three phases; the score didn’t always show that.”

After picking up 215 yards in week one, the Trojans had a robust 605 yards against the Hornets.

“We dominated the game; we just shot ourselves in the foot especially in the first half,” Brown said.

Quarterback Brandon Silvers also bounced back from week one: the senior quarterback completed 32 of his 40 passes for 345 yards.

It was a welcome adjustment for Silvers and it was one that he had to make.

“He didn’t have a choice,” Brown said. “He had to respond. We coached him hard. My expectations of him are not going to change. I expect him to play like an all-league quarterback and a potential NFL draft pick.

“He didn’t play like that a week ago, but our standards are not going to change. He stepped up, he prepared all week, he practiced all week and I am a firm believer that if you pay the price, you will reap the benefits.”

After a tough week of practice, it was a good feeling for Silvers to perform well in front of the home crowd.

“It felt great,” Silvers said. “These seven days have not been great for us. We were excited to play in front of our crowd and on our field, put the Boise game behind us. Scoring one touchdown is not what we are about, so tonight we scored quite a few– so it was good.”

The running game was much improved on Saturday. Newcomer Jamarius Henderson scored his first Trojan touchdown and rushed for a team-high 107 yards and two touchdowns.

Overall, the Trojans rushed for 263 yards in the win over the Hornets.

“I thought he (Henderson) was explosive and he ran with a purpose,” Brown said. “He plays the game with a little bit of an edge and we need that.”

Jordan Chunn rushed for 61 yards on 13 carries and scored three touchdowns. The Trojans entered the game with the goal of establishing their run game.

“We were committed to get Jordan going early,” Brown said. “We wanted to get Jamarius some touches and he was able to break some runs. You see some of the skill level that he has. He can be a potential game-breaker.”

Chunn didn’t just contribute on the ground; he also played a factor in the receiving game. The senior hauled in seven catches, tied for the team lead at 73 yards.

“I thought Chunn was really good in the passing game,” Brown said. “That was something that we as a coaching staff after last season came back in January and pushed on him that you have to be more of a threat in the passing game and he had some great runs after catches.”

Having Chunn in the passing game helped Silvers get into a rhythm offensively.

“He has always been there run and pass,” Silvers said. “He is always there for me. He does a great job blocking for me as well. Getting him the ball out in space and letting the little guys try to tackle him. It’s always nice getting him the ball.”

The Trojan offense will look to stay on track next week when they travel to Las Cruces New Mexico to take on New Mexico State.