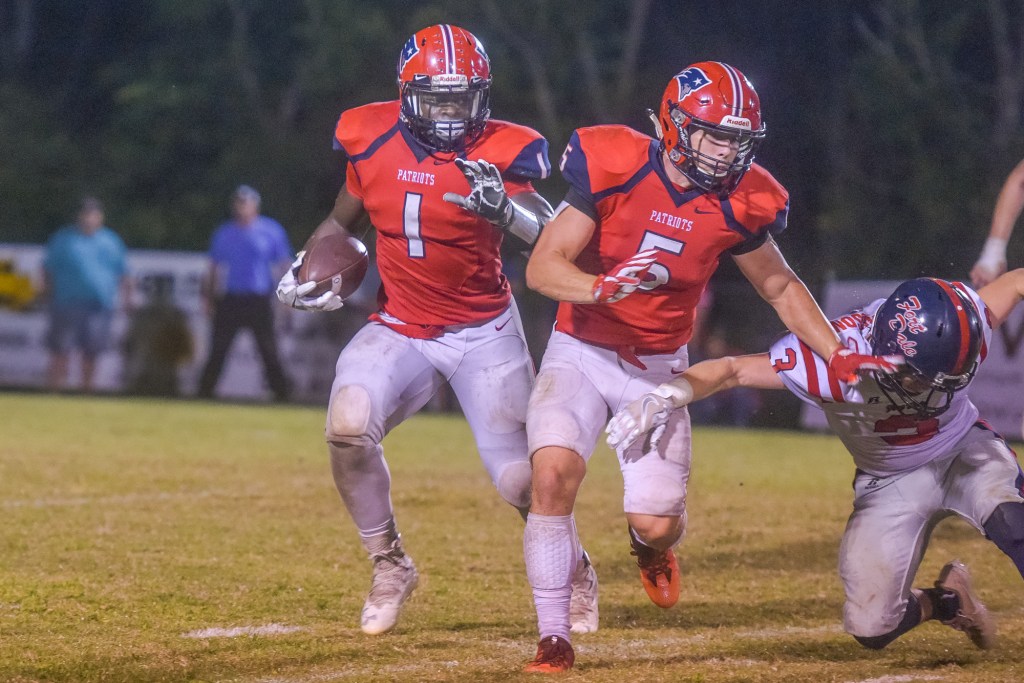 The Pike Patriots scored 20 unanswered points in their 20-14 win over rival and region foe Fort Dale on Friday night.

It was a tale of two halves on top of the hill, but it was the Patriots that walked off winners to improve their record on the season to 4-0 overall and 1-0 in region play. With the loss the Eagles drop to 2-1 overall and 0-1 in region play.

“We didn’t play well at all in the first half,” said head coach Gene Allen. “We did some good things defensively but when they get the ball in your territory every time it gets tough. Every thing worked good in the second half.”

Establishing the running game after halftime helped the Patriots.
“We wanted to continue power football,” Allen said. “We made some moves formation wise on offense and we thought we were wearing them down a little bit and we felt like they got tired so we kept pounding them.”

The Pike Patriots struggled to get out of their own way in the first half on Friday night. Three of their six firs half possessions lasted three plays or less.

Penalties also played a big role in the Patriots struggles on Friday night especially in the opening half.

“I have to look at the film,” Allen said. “We can complain about officiating, but 95 percent of them were us. We were grabbing and holding them. It’s a rivalry game and nobody wants to get beat.”

The Eagles took an early lead over the Patriots after Pike went three and out to start the game, the Eagles embarked on a six play drive that spanned 49 yards on six plays. Jason Little set the up the Eagles on the Patriots 49 yard line after he took the punt 51 yards.

Quarterback Luke Taylor closed out the drive on a two-yard touchdown run. After a missed extra point, the Eagles took a 6-0 lead at 7:24 remaining in the first quarter.

The Patriots didn’t have many chances to score in the half. One chance came after TK Thomas picked up a botched snap on a punt and rumbled for a first down. The Patriots couldn’t capitalize, having to punt the ball back to the Eagles.

The Patriots had another bad snap on a punt midway through the second quarter. This time the Eagles gained possession on the Patriot 20-yard line.

Zach Winters ran the ball in from the five-yard line to put the Eagles up 12-0. Fort Dale elected to try and a two-point conversion and Taylor took the ball into the end zone to increase the Eagles lead to 14-0 with 4:44 remaining in the half.

In the second half the tables turned.

It was bad special teams play by the Eagles that lead to the Patriots first score. A bad snap on a punt forced the Eagles punter to go down to a knee to haul in the snap giving the Patriots possession on the Eagle 41.

Five plays later Reed Johnson ran the ball from five yards out to put the Patriots on the board at 14-7.

The Patriots evened the score on their next possession when Reed Jinright scored his first and only touchdown of the night from two yards out to tie the score at 14 with 4:33 remaining in the third quarter.

It was the Thomas show to begin the fourth quarter for the Patriots. The Patriots gained possession on their own 20-yard line and Thomas did the rest. After already picking up 16 yards on the drive, Thomas took a Jinright handoff 65 yards for what would be the winning touchdown.