Troy comes home for showdown with the Hornets 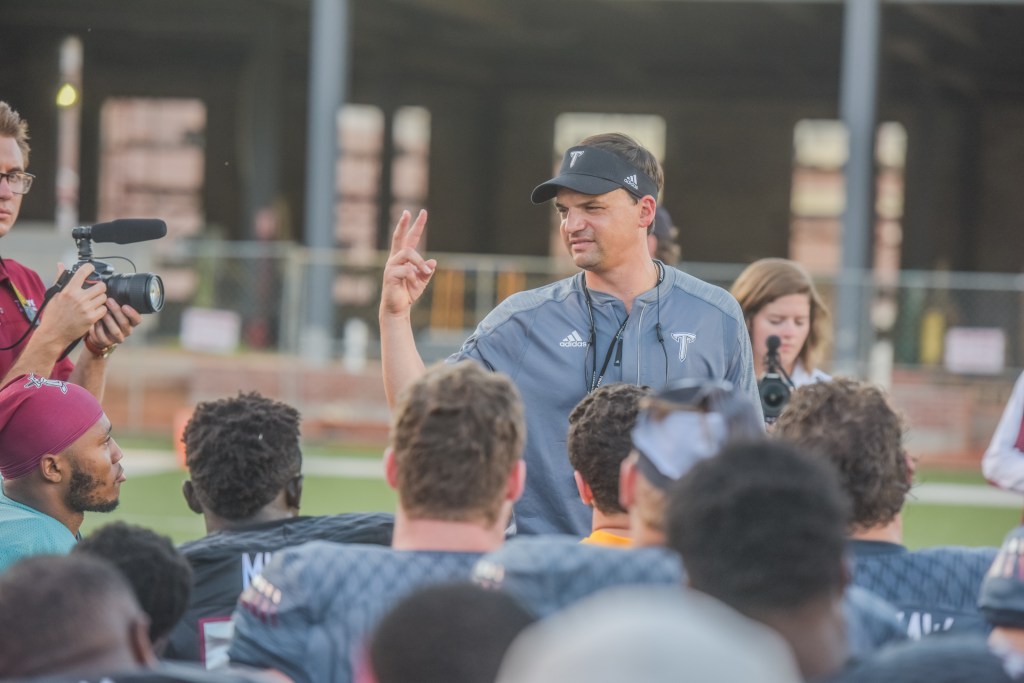 Messenger Photo/jonah enfinger Neal Brown and the Troy Trojans take on Alabama State in the 2017 home opener on Saturday beginning at 5 p.m.

The Troy Trojans will host the Alabama State Hornets for their 2017 home opener on Saturday afternoon at Veterans Memorial Stadium.

The Trojans hope to right the ship this week after falling in the season opener against Boise State 24-13 last Saturday.

“We have a great opportunity on Saturday when we get to come back home in front of our home crowd,” said Troy head coach Neal Brown. “I believe our home fans are going to show up and be enthused about this football team. I can promise you that we’re going to get better on special teams and offense, and we’re going to continue to play at a high level on defense.”

The Troy defense kept the Trojans in the game against the Broncos last week. They allowed 357 yards of offense, but only gave up 7 second-half points. This week, the Trojans go up a Hornets offense that scored just 6 points in their 14-6 loss to Tuskegee in their season opener.

“They’re a spread team, offensively,” Brown said. “They’re very multiple; they do a lot of things. Their quarterback is athletic and they move the ball well. They shot themselves in the foot on Saturday against Tuskegee. They moved the ball up and down the field and missed some field goals. They really controlled the game with their offense.”

Offense was a big area of concern for the Trojans against the Broncos. The Trojans picked up just two first downs and 77 yards in the opening half.

“We didn’t play very well,” said offensive coordinator Kenny Edenfield. “As coaches, we kind of sensed as it got going that we were a little off-beat. We tried to get rolling a little bit and never could kind of get in a rhythm. Really, that’s a lot of what it was – we never could get in a rhythm. We got frustrated and pressed.”

Quarterback Brandon Silvers did not have his prototypical afternoon. He completed 17 of his 33 passes for just 139 yards and threw one interception.

“He did not have his best game,” Edenfield said. “He’s played a lot of better games. He knows that. I think he’ll come back. Usually, when he plays poorly – which isn’t a lot – he usually responds really well. I think he’ll do the same thing this time.”

Despite falling to Tuskegee, the Hornets finished with 367 yards compared to just 192 yards by the Golden Tigers.

“Defensively, I’ve been impressed,” Brown said. “They have a new coordinator this year from Tennessee State who was really good, statistically over the last couple of years. They played really sound on Saturday. They cover well at corner, they make plays and they tackle well.”

After falling a week ago, Brown and the Trojans will use it as motivation this week in front of what they hope is a packed house at Veterans Memorial Stadium.

“I’m sitting here and we got beat 24-13 at Boise, a team that has the best home winning record since 2000, and I’m highly upset with how we played on Saturday,” Brown said. “I’m not over it, I won’t be over it on Saturday. Some coaches get up here and say, ‘It’s over, we’ve got to turn the page,’ but I’m not turning the page. We’re going to remain upset and prepare with an edge and a hunger to not go out and repeat that performance.

“I believe in our fans. Over the last two years our fans have stepped up. We have people enthused. This is going to be a football team that our fans can be proud of. I’m excited and wish we could go out there and play right now.”